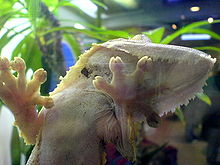 A gecko climbs a glass wall.

In addition to mainly electrostatic forces, geckos also use van der Waals forces to adhere to surfaces without glue or suction cups. The undersides of her feet are full of the finest hairs. Each hair can only transmit a small amount of force, but due to the high number, the sum of the forces is sufficient for the animal to walk upside down on blankets. This is also possible on smooth surfaces such as glass. The sum of the contact forces of a gecko is about 40 N.

London's dispersion interaction also occurs between non-polar tiny particles ( noble gas atoms , molecules ) if these are polarizable , and leads to a weak attraction of these tiny particles.

Electrons in a tiny particle ( atom ) can only move within certain limits, which leads to a constantly changing charge distribution in the tiny particle. As soon as the center of gravity of the positive charges is spatially separated from the center of gravity of the negative charges, one can speak of a dipole , because there are two ( di- , from the Greek δίς "twice") electric poles. However, individual non-polar molecules can only be called temporary dipoles, because their polarity depends on the electron distribution, which changes constantly. (In polar molecules, on the other hand, the dipole property is permanent due to the electronegativities of the atoms and the spatial structure, which is why they are called permanent dipoles or dipoles in the narrower sense.)

If two non-polar molecules come close to each other long enough (i.e. at a low relative speed), then they enter into an electrostatic interaction with each other.

If, for example, particle A shows its neighbor B a strongly negatively charged side, then the electrons of neighbor B (from the side facing it) are repelled. This is how the dipoles align with each other. Such a charge shift through an electric field is called influence . This means that the negative pole of a temporary dipole influences a positive pole opposite the neighboring molecule. Particle B thus becomes an “influenced” dipole. In the specialist literature this is called "induced dipole" (Latin inducere : (to) introduce).

Van der Waals forces occur between the original, temporary dipole and the induced dipole. From now on the dipoles influence each other and their electron shifts are synchronized.

If two atoms or molecules come close enough, one of the following situations can arise.

In the above description, however, the electrons are treated as classical particles and the knowledge of quantum mechanics is not taken into account. In the quantum mechanical atomic model , the electron is described by a stationary wave function , the square of which always remains the same at a certain point in the atom. This suggests that the electron behaves like a classical, extended charge distribution, with a charge density that is given by the product of the electron charge and the square of the wave function:

According to this, the charge distribution would be invariable and the spontaneous creation of temporary dipoles would not be possible. Since it is typically axially symmetrical around the atomic nucleus, the dipole moment of a noble gas atom, for example, would always be zero.

On closer examination of the quantum mechanical charge density operator

where is the position operator of the electron, this turns out to be a fallacy. An electron does not behave like an extended charge distribution, but like a point charge whose location is indeterminate. For the expected value of the charge density it actually results

however, it is not an eigenvalue of the charge density operator. The charge density has a certain fuzziness, which leads to the fact that with a certain probability the center of gravity of the electronic charge distribution is not in the atomic nucleus and thus a dipole moment arises. In this way, the van der Waals forces can be understood in the picture of quantum mechanics.

Since said dipole moments are small, the resulting electrical attraction is weak and has only an extremely short range. In order for the van der Waals attraction to occur at all, two atoms or molecules must come close. This approximation is the “more difficult” (statistically less likely) the more kinetic energy the molecules have, ie the higher the temperature. As the temperature rises, the thermal movement outweighs the van der Waals forces. This often represents the transition from the liquid to the gaseous state.

There are solids that are held together exclusively by van der Waals forces. The noble gas crystals that only occur at low temperatures are an example of this.

The influence of the Van der Waals forces can be clearly understood using the example of alkanes . Here, the boiling point initially rises with increasing molar mass (the melting point does not, as further influences are added at this point). In the case of isomers , the boiling point increases with increasing chain or decreasing spherical shape, since the sphere has the smallest surface area for a given volume. This phenomenon can be found, for example, in the following isomers (all C 5 H 12 ): 2,2-dimethylpropane (bp 9.5 ° C), 2-methylbutane (bp 28 ° C) and n- pentane (bp 36 ° C) , 1 ° C).

Van der Waals forces between atoms or small molecules can be described by a potential of the shape .

For macroscopic bodies ( e.g. colloids ), which are known to be significantly larger than individual atoms or small molecules, the potential for describing the van der Waals interaction has different shapes and depends on the geometry of the problem being investigated. In the Hamaker theory , all microscopic van der Waals potentials are added up, using the assumption that the resulting potential is composed additively (which is not the case in reality, since the induced dipoles influence each other). To avoid the problem of non-additivity, the potential can alternatively be calculated using the Lifshitz theory (a continuum theory, named after Yevgeny Michailowitsch Lifschitz ).

For example, for two spheres with radii , the centers of which have the distance according to Hugo Christiaan Hamaker :

wherein the distance of the ball centers with can be expressed the spacing of the spherical surfaces and the Hamaker constant is.

In the distance , the above expression simplifies to:

It follows from Hamaker's constant that the van der Waals interaction is minimized if the refractive index of the liquid and the particles are made more similar.