Hydrogen bonding is a form of minor valence bond and its strength is usually well below that of a covalent bond and ionic bonds . Hydrogen bonds between molecules lead to a high melting and boiling point of the compound in relation to the molar mass. Interactions within and between molecules determine the structure of peptides and nucleic acids .

The concept of hydrogen bonds was first described in 1919 by Maurice L. Huggins and in 1920 by Wendell Mitchell Latimer and Worth H. Rodebush to explain the high dielectric constant of water.

Structure of the bond

In the liquid and solid phase, there are hydrogen bonds between the individual methanol molecules, shown with dashed blue lines.

Hydrogen bonds exist when two functional groups interact via hydrogen atoms . It does not matter whether the bond is between two molecules or two distant sections of a - mostly large - molecule. A distinction is made between the functional groups between the proton donor (also: donor , donor ) and the proton acceptor . The donor is an electronegative atom (e.g. nitrogen , oxygen or fluorine ) to which a hydrogen atom is covalently bonded. The acceptor is any other atom with lone pairs of electrons . The bond between the hydrogen atom and the acceptor is usually weaker (longer) and is symbolized as a dotted line. In general, such a system is represented as follows:

Certain functional groups can act as donors and acceptors at the same time. A simple example is the hydrogen bonds between water molecules. Here X and Y are oxygen atoms:

The atoms X − H … | Y are often arranged linearly (bond angle close to 180 °) and the bond can be viewed as a 2-electron-3-center bond . The bond is not only electrostatic ( ionic ), even the weak H … | Y bond part has a direction of action, similar to covalent bonds. The alignment of the lone pairs of electrons of the acceptor Y directs the angle between H … | Y – R 2 , which is therefore mostly not linear.

A hydrogen bond can be viewed as a “frozen” partial step in a proton transfer . The strength of the bond increases with the acid constant of R − X − H and the base constant of | Y − R. In the case of a hydrogen bond between an oxonium ion (H 3 O + ) and a water molecule, a dimer H (OH 2 ) 2 + with a strong bond is formed, in which the two bonds of the bridging H atom are of equal length:

If there are hydrogen bonds between binding partners that are difficult to polarize and have weak acid-base behavior, the hydrogen bonds are very weak and undirected. In this case, the strength of the interaction is determined by van der Waals forces .

George A. Jeffrey introduced a classification based on the strength of hydrogen bonds.

Hydrogen bonds as intermolecular forces act between molecules of a compound or the compound with protic solvents such as water. You lead to

Hydrogen bonds are responsible for the special properties of many molecules that are important for living things : 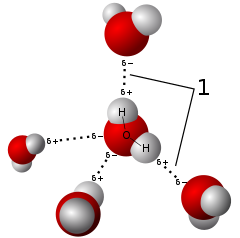 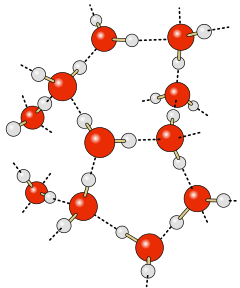 Spatial networking of the water molecules

Due to the higher electronegativity of oxygen with 3.4 compared to that of hydrogen with 2.2, the water molecule has partial charges . The oxygen is partially negative (δ−), the hydrogen atoms partially positive (δ +). The hydrogen bonds form between the different partial charges.

Hydrogen bonds are responsible for a number of important properties in water . These include the liquid state of aggregation under normal conditions , the cohesion , the relatively high boiling point and the density anomaly of the water .

The typical bond length of hydrogen bonds in water is 0.18 nm. There are two types of bonds. So-called linear bonds with a bond angle of 180 ° and non-linear 180 ° ± 20 °, whereby the linear bond predominates. Whereas a purely tetrahedral network (bond angle 180 °) would have to lead to 4 closest neighbors (coordination number 4), the coordination number measured (by X-ray scattering ) is 4.5 under normal conditions. With decreasing density, this measure of order decreases (in contrast to an increase in the coordination number for most other liquids) to 4 and thus to the value for an ideal tetrahedral structure.

The hydrogen bonds must be broken during evaporation ; This explains the high energy expenditure (compared to other substances) to convert liquid water at 100  ° C into steam at 100 ° C (see heat of vaporization ).