Binding energy has to be applied in order to break down a bound system of two or more components (for example a celestial body, a molecule , an atom , an atomic nucleus ), which are held together by forces of attraction, into its components. The same amount of energy is released when the bound system is formed from the individual parts. Sometimes binding energy is not understood to mean this amount of energy itself, but the change in the energy content of the system when its parts combine with one another; then it has the same amount but is negative. So is z. B. the usual reaction enthalpy in chemistry is negative if energy is released during the reaction.

The term binding energy is a common technical term, but linguistically a bit unfortunate. It leads - especially with a following genitive, such as B. Binding energy of "the uranium atomic nucleus" or "the ATP molecule" - easy to misunderstand that it is an amount of energy that is present in the bound system and can be released from it. As mentioned above, the opposite is correct: the binding energy was already released and given off when the bound system was formed, and is therefore no longer available.

For example, if the distance between two permanent magnets is sufficiently small, they attract each other and move towards each other. Moments before the collision, both magnets have their highest kinetic energy, which is then converted into sound energy and heat . In order to separate the magnets from each other again, the binding energy must be applied. Its amount corresponds to the previously released total energy.

The chemical bond energy is the measure of the strength of a covalent bond . The molar binding energy of ion crystals is described under lattice energy and lattice enthalpy .

Binding energies between atoms for molecules are between 200 and 700 kJ · mol −1 (2 to 7 eV per bond). Particularly low binding energies are observed in hydrogen bonds . With only 17 to 167 kJ / mol (0.18 to 1.7 eV per bond), they are significantly weaker than the binding force within a molecule.

In atomic physics , binding energy is the energy required to split an atom / ion into a (different) ion and an electron. It comes about through the electrical attraction between the electron and the atomic nucleus. When an electron is captured, the same amount of energy is released. Chemists often prefer the term ionization energy instead of binding energy .

The valence electrons of the first main group have particularly low binding energies , from 13.6  eV for the hydrogen atom to 5.14 eV for sodium to 3.9 eV for cesium . The higher an ion is charged, the higher the binding energy of the remaining electrons. The second and third ionization energies for sodium are 47 and 72 eV, respectively.

In order than an electron to be spent from an uncharged solids to remove, has energy, work function is called. It is often considerably lower than the binding energy in the isolated atom and is e.g. B. with cesium only 2.14 eV. Its value can be reduced by the Schottky effect . The work function is z. B. the Edison-Richardson effect , secondary electron multiplier , secondary electron microscope and photoelectric effect of importance.

In the case of a rectifying metal-semiconductor transition as in the Schottky diode , electrons have to overcome the Schottky barrier, which is usually between 0.5 and 0.9 eV. The band gap in the band model of a semiconductor corresponds to the binding energy of an electron in the valence band .

the nuclear mass of the atom,

the mass of an electron,

the mass of the neutral atom,

the speed of light .

The total binding energy of the electron shell cannot easily be measured in experiment. Instead, one is largely dependent on theoretical estimates . For uranium isotopes 92 U, for example, calculations result in a total electronic binding energy of about 760 keV. For comparison, remember that the energy equivalent of the mass of an electron is 511 keV. 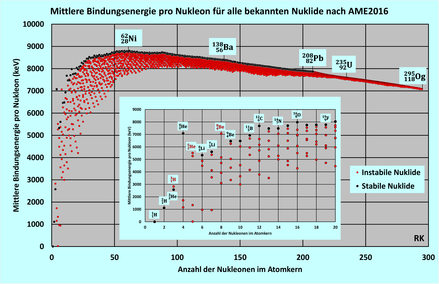 The binding energy of atomic nuclei can be estimated within the framework of the droplet model using the Bethe-Weizsäcker formula . The points in the graph are related to the magic numbers .

The bond is associated with a mass defect because of the equivalence of mass and energy : the bonded nucleus has between 0.1% ( deuteron ) and 0.9% (Ni-62) less mass than all of its nucleons combined. The binding energy of the nucleus can therefore be derived from an exact determination of the mass of an atom :

the mass of the atom,

the mass of a free proton,

the mass of an electron,

the mass of a free neutron,

the speed of light .

The binding energy of short-lived nuclei can be determined, for example, by measuring the energies of their decay products.

The gravitational binding energy is the energy that is required to break a body held together by gravity (e.g. the earth) into very many tiny components and to separate them infinitely from each other. Conversely, the same amount of energy is released when these components combine to form a gravitationally bound body. This happens when a gas cloud collapses into a more compact celestial body, such as a star (see also Jeans criterion ), and leads to the cloud heating up.

If one idealizes a celestial body as a sphere with a radius and homogeneous density , the binding energy results as follows:

is the mass of the previous sphere. The thickness of the spherical shell to be added should have the same density. So there has to be a mass

can be brought from infinity to the surface of the sphere. The energy released is

If you build a sphere with a radius layer by layer , the following binding energy is released:

The binding energy is therefore