There are three types of photoelectric effect: 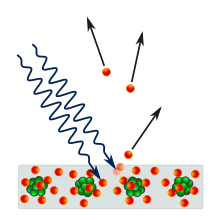 Scheme of the external photoelectric effect: When irradiated with short-wave light, electrons are released from the surface.

The release of charge carriers from a bare metal surface in electrolytes by light was first observed in 1839 by Alexandre Edmond Becquerel in the so-called Becquerel effect .

In 1886 Heinrich Hertz was able to demonstrate the influence of ultraviolet radiation (UV) on the metal surfaces in a spark gap . He observed that the ultraviolet light emitted by a “primary spark” A increases the length of a second spark B. The length of B depended reciprocally on the distance between the sparks, various absorbers for ultraviolet (including those that are transparent in the visible spectral range) reduced the size of the spark. Hertz was unable to prove that visible light had an influence on the spark length. The explanation of these observations is that the ultraviolet light electron knocks out the electrodes of the spark gap, which then already at lower electric field strength lead to a rollover, as not only the work function has to be spent.

Schematic representation of a gold sheet electrometer, as used by W. Hallwachs for his experiments.

Wilhelm Hallwachs , then assistant to Gustav Wiedemann in Leipzig, carried out further systematic investigations (hence the name Hallwax effect ). He showed z. B. with a "gold leaf electroscope" (see figure on the right) that a metal plate could be electrically charged by irradiating it with an arc lamp.

Philipp Lenard was the first to investigate the photoelectric effect in a high vacuum . In 1899 he was able to determine their specific charge by deflecting the charge carriers in the magnetic field and thus identify them as electrons. He discovered the dependencies on frequency and irradiance described above. In 1905, Albert Einstein provided the explanation of the effect in § 8 of his work on a heuristic point of view concerning the generation and transformation of light , for which he received the Nobel Prize for Physics in 1921. From 1912 to 1915 Robert Andrews Millikan was able to confirm with the help of the opposing field method (see below) that the proportionality factor of the Einstein equation agrees with the already known Planck quantum of action .

The opposing field method is helpful for demonstration experiments on the external photoelectric effect or for determining the work function of the material used as cathode. 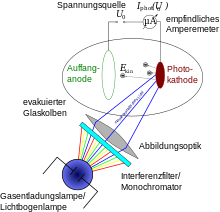 Experimental setup for the opposing field method. Light hits the cathode of a photocell and releases electrons from the metal. These are caught by the anode.

A narrow wavelength range is filtered from the light of a mercury vapor lamp through an interference filter or a monochromator and bundled (possibly through a lens) onto the cathode (red in the picture) of a vacuum photocell . A vacuum is required so that the mean free path of the electrons that have escaped is sufficient to reach the anode. A voltage can be applied between the two electrodes, and the current can be measured using a sensitive ammeter .

If the cathode is irradiated with light of a sufficiently short wavelength, electrons are "knocked out" there and have kinetic energy . The photocell becomes a power source and the flowing photocurrent can be measured with a sensitive ammeter . This also takes place when the anode has the same potential as the cathode, the electrons then need almost no kinetic energy to get to the anode. Is now even a reverse voltage is applied, must electrons which reach the anode and cause a photo current, next to the work function of the cathode, the electric field generated have overcome.

The counter voltage , from which no more photocurrent flows, can be determined for different frequencies of light; At this voltage, the potential difference that the electrons (electrical charge ) have to overcome is equal to the maximum kinetic energy of the electrons after they have left the cathode. Assuming that the energy of the light only through energy quanta with the energy (with the Planck's constant is transmitted) to the electrons, can be measured from the slope of the straight line , the quantum of action determined (see also Millikan). The work function can also be determined.

Determination of h and the work function

The image on the right was obtained with a zinc photocathode. The red points are the energy values ​​obtained with the opposing field method at four different discrete light frequencies. The points were interpolated or extrapolated to the entered straight line . The slope of the graph is obtained by means of the slope triangle to

roughly Planck's quantum of action. The y-axis intercept of the dashed line corresponds to the work function; in the case of zinc, this value is read as approx. (-) 4.3 eV. The true value is 4.34 eV.

Interpretation problems in the context of the wave presentation

In the experiments just described, the following observations can be made:

With the exception of the last observation, all of the relationships found contradict the classic notion of light as a wave phenomenon. According to this, the energy of a wave depends solely on its amplitude , but not on its frequency . As a result, the kinetic energy of the electrons should also decrease as the irradiance decreases. The effect should then be delayed, as the transfer of the energy required to release the electrons then takes longer. Instead of a minimum frequency, it would be expected, according to the classical concept, that with decreasing frequency only the time until an electron has collected enough light energy increases.

Feynman diagram for the photo effect: An electron electrically bound to an atom interacts with a photon and changes its energy in the process.

Interpretation and meaning of the phenomenon

Physicists like Isaac Newton had already assumed that light consists of particles, so-called corpuscles . By the end of the 19th century at the latest, however, the idea of ​​light particles was considered obsolete because, on the one hand, Maxwell's electrodynamics understood light as an electromagnetic wave and, in accordance with this, interference experiments undoubtedly demonstrated the wave character of light.

Einstein's explanation of the photoelectric effect by light particles in 1905 was a bold hypothesis against this background . The basis was Planck's radiation hypothesis from 1900, according to which light consists of a stream of particles, the photons , whose energy is the product of the frequency of the light and Planck's quantum of action ( ). With the help of this assumption, the relationship between the frequency and the kinetic energy of the photon (initially thought of as a particle with mass) can be explained, and all further experimental observations based on this.

The apparent contradiction thus found, that light shows wave behavior in certain experiments but particle behavior in others ( wave-particle dualism ), was only resolved by quantum mechanics . The photoelectric effect was one of the key experiments in establishing quantum physics . Einstein was awarded the Nobel Prize in Physics in 1921 for explaining the effect .

Photoconductivity is understood to mean the increase in the electrical conductivity of semiconductor materials due to the formation of unbound electron-hole pairs during irradiation. The electrons are lifted from the valence band into the energetically higher conduction band by means of the energy of the photons , for which the energy of the individual photon must at least correspond to the band gap of the irradiated semiconductor. Since the size of the band gap depends on the material, the maximum wavelength of the light up to which photoconductivity occurs differs depending on the semiconductor (gallium arsenide: 0.85 μm, germanium: 1.8 μm, silicon: 1.1 μm).

Photoconductivity spectra show the dependence of the electrical conductivity on the energy (or the wavelength) of the incident light. The conductivity increases significantly from the band gap energy, so that the (direct) band gap can be determined in this way. The detailed analysis of such photoconductivity spectra, in combination with the findings from other investigations, is an important basis for understanding the band structure of the material used (see also band model ).

Monochromators are used to measure the wavelength dependence of photoconductivity . Measurements are usually carried out in a vacuum to B. to avoid water bands (see infrared spectroscopy ) in the near infrared, or at low temperatures to z. B. to separate magnetic field effects from noise.

The photoconductivity is used in photoresistors , phototransistors , photodiodes and CCD sensors ( see also pin diode and avalanche photodiode ), which are used in the manufacture of a large number of light sensors .

In photoresistors and also other semiconductors, charge carriers generated by light can persist for a very long time (hours to days) even after darkening; this is called the long-lasting photo effect (PPE for short ).

Phototransistors contain photosensitive PN junctions. They amplify the current occurring in their base.

For measurements in the visible and infrared spectral range, photodiodes are usually operated as photoconductors in a quasi-short circuit or in the blocking range - they then deliver a current that is proportional to the incident radiation flux over many orders of magnitude.

Persistent photoconductivity is observed in strontium titanate single crystals at room temperature. After exposure, the free electron concentration increases by two orders of magnitude and remains elevated for days.

The photovoltaic effect is also based on the internal photoelectric effect. Charge carrier pairs that arise in the space charge zone , i.e. at the pn junction of a photodiode , are separated in p- and n-layers. The electrons go into the n-layer and the holes into the p-layer, and a current is created against the direction of the junction. This current is called the photocurrent.

Large-area photodiodes ( solar cells ) are used to convert the radiant energy of the sun into electrical energy.

If the atoms or molecules of a gas are deprived of one or more electrons by short-wave radiation, one speaks of photoionization or atomic or molecular photoeffect. For this, photons with much higher energies are necessary than for the loosening of the bond in a solid. These are contained in ultraviolet , x-ray or gamma radiation .

If the photon is absorbed and gives off all of its energy to an electron, this is commonly referred to as a photo effect in nuclear physics . This is z. B. exploited in radiation detectors . In addition, the Compton effect also contributes to photoionization , in which the electron only takes over part of the energy, while the rest of the energy is emitted again as a photon of greater wavelength. 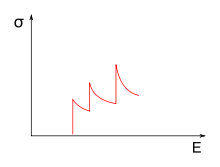 The cross section , i.e. the probability of photoionization occurring, depends on the photon energy and the atomic number of the material:

So it is approximately proportional to the fifth power of the ordinal number. This means that materials with a high atomic number absorb X-rays and gamma rays particularly well . Lead ( ) is therefore better suited for shielding X-rays than, for example, aluminum ( ).

With increasing photon energy, the cross-section decreases, as the negative power in the formula shows; However, this only applies as long as a constant number of electrons in the atom is available for ionization. As soon as the photon energy reaches the binding energy of the next more firmly bound electron shell , the cross-section jumps to a correspondingly higher value, from which it then gradually decreases again as the energy increases. This results in the absorption spectrum to characteristic structures, the absorption edges . Electron binding energies range from a few eV to around 100 keV in elements with a high atomic number.

The photoionization of air by means of ultraviolet radiation by ionizers is used to increase its conductivity and thereby to dissipate electrostatic charges .

The measurement of the conductivity of the air was used for the first time to prove the cosmic origin of a part of the natural radioactivity by measuring it during balloon ascents: the cosmic radiation produces showers of ionizing particles and partly radioactive spallation products .

There is also a nuclear photo effect , in which a very high-energy gamma quantum is absorbed in the atomic nucleus and, with a nuclear reaction , releases a neutron , proton or alpha particle . This is also referred to as (γ, n), (γ, p) or (γ, α) reactions.