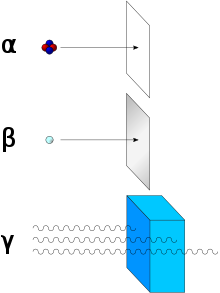 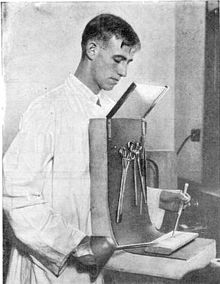 Personal shielding for working with radium (1929)

Charged particles, for example alpha or beta radiation , have a specific range in matter , which depends on the type of particle, particle energy and material. A shield that is thicker than completely suppresses the incident radiation. The range in air from atmospheric pressure is z. B. for electrons with the energy 10 MeV about 3 m, for alpha radiation of the same energy only 10 cm.

The specific range is explained by the fact that the particles do not release their energy to the absorber all at once, but in many small steps - by exciting outer shell electrons and, to a lesser extent, by knocking out internal electrons from the atom (see also Linear energy transfer , LET). Elastic scattering processes on the electron shell and the Coulom scattering on atomic nuclei also contribute somewhat to absorption by lengthening the path of the charged particles in the absorber.

For non- relativistic particles of mass and charge , the linear energy transfer is inversely proportional to the energy and depends on the density and the ratio of the atomic number to the mass number of the material:

The inverse dependence on the energy (which is continuously decreasing along the way) is reflected in the Bragg curve . The abrupt drop beyond the Bragg peak determines the range . For alpha particles of the emission energy in air, this corresponds to Geiger's empirical, non-relativistic range law :

For electrons this range begins at around the energy of 5 MeV, for protons only in the TeV range:

(for electrons, in MeV) 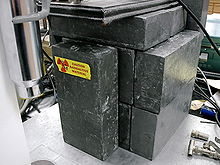 High-energy electromagnetic radiation such as X-rays or gamma radiation is weakened almost exponentially in matter . It therefore has no specific range, but its reduction can be described by a half-value thickness that depends on the quantum energy and material . This is z. B. for quanta of 2 MeV in lead about 1.3 cm. (However, in the case of high quantum energies, the radiation dose initially increases slightly with increasing depth when entering matter, see build-up effect )

The exponential attenuation - described by the mass attenuation coefficient - is essentially based on three different interaction processes, the relative contributions of which depend on the quantum energy and on the atomic number (atomic number) Z and mass number A of the shielding material. Two other mechanisms, nuclear photo-effect and normal elastic scattering, are normally negligible for the shielding effect.

The single most important process is

At low and high energies , heavy elements, i.e. elements with a high atomic number, absorb particularly well. This is why most gamma and X-ray shields are made of lead . Glass with a high lead content is used for viewing windows. In the middle energy range, where Compton scattering is important, the properties of the shielding materials differ only slightly. Low-neutron light nuclides are somewhat more effective with the same mass occupancy , but are not very common in practice because of the greater layer thickness required.

When the radiation is weakened, electrons are released as secondary particles and, at very high energies , protons and neutrons are released due to the nuclear photo effect . You are u. U. for their part new sources for gamma radiation and tertiary particles. In order to avoid spallation reactions with heavy elements, shields against high-energy radiation consist of a combination of heavy and light materials.

Neutron radiation generally penetrates matter easily because its interaction only takes place with the atomic nucleus and not with the electron shell. Shields against neutrons mostly work through a combination of scattering (elastic or inelastic) and absorption in nuclear reactions .

Thermal neutrons can be shielded very effectively with materials containing boron or cadmium , as these elements have large absorption cross sections . A sheet of cadmium 1 mm thick reduces the thermal neutron flux passing through it about 10 −5 times, i.e. to 1 hundred thousandth. However, neutron radiation with a purely thermal energy spectrum rarely occurs because free neutrons always have much higher energy when they are released.

For fast or mixed neutron radiation, a hydrogen-containing material such as water, paraffin or polyethylene, which acts as a moderator, is suitable in a mixture with e.g. B. a boron compound. For neutrons in the MeV range, it is usually more material and space-saving to first slow them down by inelastic scattering in, for example, iron and only to arrange the moderator and boron or cadmium behind them.

Because of the only weak interaction of the neutrinos, it is not possible to shield against these particles by practical means on earth. However, since their interaction with matter, including the tissue of living beings, is so extremely low, shielding for radiation protection is not necessary.

Interactions between radiation of high particle or quantum energy and matter generate secondary radiation , which in many cases is more difficult to shield than primary radiation .

For radiation measurements, e.g. B. in gamma spectroscopy , shields are usually necessary to keep radiation other than the one to be examined away from the measuring device. When measuring weak sources, materials must be used that emit as little or no gamma radiation as possible. Any electrons or alpha particles from the shielding material can be suppressed by an additional inner lining of the measuring chamber with, for example, plastic. However, two very commonly used materials, steel and lead, usually have some natural radioactivity that also produces gamma radiation. In the case of lead, this is caused by the lead isotope 210 Pb (half-life 22 years), which is contained in lead ore as a product of the uranium-radium decay series; in the case of steel, it is caused by various radionuclides contained in the alloy. For this reason, low -radiation lead or steel material is used for the above-mentioned applications , which has either been cleaned using complex technical processes, is made from special ores or has been produced a long time ago (i.e. many half-lives of the interfering nuclide), such as hull material or lead ballast from sunk Ships. 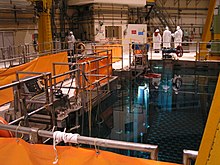 Water as a screen in a cooling pool.

Swimming pool reactors use a layer of water several meters thick as a coolant and shield. In nuclear power plants spent fuel are in similar cooling pond stored. The water in the basin is used for