Johannes Geiger is a redirect to this article. For other people see Johann Geiger . 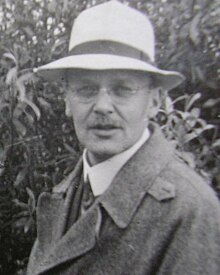 Johannes "Hans" Wilhelm Geiger (born September 30, 1882 in Neustadt an der Haardt ; †  September 24, 1945 in Potsdam ) was a German physicist . He became famous and named by him after he along with his doctoral Walther Müller developed Geiger counter (also Geiger-Müller counter called). 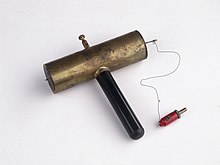 From 1902 Hans Geiger studied physics and mathematics in Erlangen , where he was a member of the Bubenreuth fraternity and in the first two semesters did his one-year military service on the side. In 1904 he also spent a semester at the Ludwig Maximilians University in Munich . In 1906 he passed his second state examination and received his doctorate in Erlangen under Eilhard Wiedemann with the work of radiation, temperature and potential measurements in discharge tubes with strong currents . After graduating, he became assistant to Arthur Schuster of Manchester and remained so from 1907 under his successor Ernest Rutherford , whose 1,911-positioned atomic model was partly based on Geiger's discoveries (see Rutherford scattering ). In addition to Rutherford, he also worked with Ernest Marsden, among others . At the end of his time in Manchester in 1912, Geiger was considered an international authority for measurements of radioactivity, which was also reflected in a book with Wilhelm Makower.

In 1912 Geiger went back to Germany to the Physikalisch-Technische Reichsanstalt in Berlin -Charlottenburg, where he set up a laboratory for radioactivity and worked with James Chadwick , who had followed him from Manchester and whom he also supported during his internment during the First World War , as well as with Walther Bothe . During the First World War he served as an artillery officer and worked in Fritz Haber's gas troops (the 35th Pioneer Regiment ) for the gas war. After completing his habilitation in Berlin in 1924, Geiger switched to the Christian Albrechts University in Kiel in 1925 as a professor . From 1924 to 1925 he and Bothe introduced the method of coincidence measurement , which they used to study the Compton effect . For this experiment, Bothe later received the Nobel Prize - after Geiger's death. Among other things, with their experiment they also showed the validity of the conservation laws of energy and momentum at the atomic level, which was at times doubted (by Niels Bohr among others ). Together with his doctoral student Walther Müller, he developed the Geiger-Müller counter tube in Kiel in 1928 (commonly known as the "Geiger counter"), which was presented to the public in 1929.

In 1929 Geiger moved to the Eberhard Karls University in Tübingen and finally became director of the Physics Institute at the Technical University of Berlin in 1936 as the successor to Gustav Hertz, who had been forced out of office by the National Socialists . There he dealt in particular with cosmic rays .

Geiger was founding editor of the Zeitschrift für Physik with Karl Scheel in 1920 and was one of the editors until 1945. After Scheel's death, he was editor-in-chief from 1936. In 1926 he was editor of the handbook of physics in Springer Verlag.

In 1939 he took part in the founding meetings of the Uranium Association and his advice to intensify research into nuclear energy was of decisive importance at their meeting in September. At the meeting of the Reich Research Council in 1942 on further support for nuclear energy research, he spoke out against further continuation of the work.

Hans Geiger died on September 24, 1945, shortly after his house in Potsdam had been vacated (it was in the restricted area of ​​the conference of the victorious allied powers in Potsdam) in a hospital. He had already retired from his scientific posts in 1942 due to a serious rheumatic disease.

Hans Geiger was buried in the New Cemetery in Potsdam . His grave has been preserved. The family who moved to West Berlin had a second tombstone erected in the Grunewald cemetery , which has also been preserved.

One of his doctoral students is Otto Haxel , who was also his assistant at the TH Berlin.

A moon crater was named after him in 1970 and the asteroid (14413) Geiger in 2000 . The Hans-Geiger-Gymnasium in Kiel-Ellerbek and a lecture hall of the physics center of the Christian Albrechts University in Kiel are also named after him, as well as a primary school and a street in his birthplace Neustadt; in other cities new roads are named after him.

Hans Geiger was the son of the grammar school teacher and later professor for Indology and Iranian Studies Wilhelm Geiger and the brother of the climatologist Rudolf Geiger . Geiger was married to Elisabeth Heffter, daughter of the Berlin pharmacologist Arthur Heffter , and had three sons: Jürgen, Klaus and Roland.

Until his death in 1945, Geiger never spoke publicly for or against the Nazis. He was not a friend of German physics and was rejected by Philipp Lenard in 1927 as an "Anglophiler" as a successor to his chair. Wolff writes that Geiger together with Max Wien and Werner Heisenberg with a memorandum, quote: "[...] opposed German physics [...]".

There are also indications that Hans Geiger stood up for colleagues and students who had problems because of the Nuremberg Laws . Lieselott Herforth , a student who took the diploma examination with Hans Geiger, comments: "... he also took my college friend, who as a" half-Jewish "was only allowed to be registered as a listener (only because her father was a doctor during the First World War) , as a graduate student. And that in 1939/40! As an external student, she was able to take the diploma examination with me in 1940. " Ernst Stuhlinger remarks: “It was only much later that it became known that Professor Geiger helped some of his unfortunate colleagues who were forced to emigrate to establish a new existence abroad through his close and very friendly relations with Lord Rutherford and other influential Englishmen has " . After the war ended, Soviet soldiers confiscated Geiger's house in Potsdam . Swinne comments on this fact: "In June 1945 Geiger's house was confiscated and sealed off because the Potsdam Conference was being held nearby."

But Geiger did not always advocate the interests of colleagues. Hans Bethe , who was dismissed from civil service due to the Nuremberg Laws (his mother was Jewish) and who was currently in Tübingen for a professorship in theoretical physics, asked Geiger for his help, which Geiger refused. Bethe wrote to Sommerfeld “[...] in any case, when asked what was going to happen, I received the enclosed letter from Geiger, the brevity of which I actually find almost offensive and according to the wording I no longer believe that I would have to say many more words in Tübingen I have to talk. ”The exact content of the letter is not known. In an oral history interview with Charles Weiner in 1967, Bethe expressed her disappointment with Geiger's reaction, but without mentioning him by name. 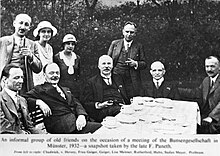 Bunsentagung Münster 1932, Hans Geiger seated 2nd from the left, behind him his wife