This article is about the physicist Gustav Hertz. For the lawyer and politician see Gustav Ferdinand Hertz . 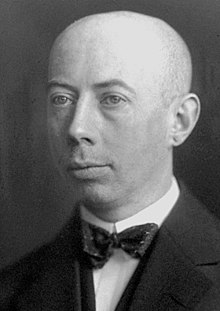 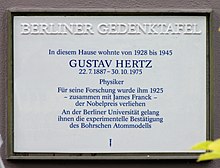 Gustav Ludwig Hertz (born July 22, 1887 in Hamburg , † October 30, 1975 in East Berlin ) was a German physicist and nephew of the physicist Heinrich Hertz . For the Franck-Hertz experiment he received the Nobel Prize in 1925 together with James Franck .

Hertz grew up in Hamburg and attended the Realgymnasium of the learned school of the Johanneum . He studied physics with a focus on the newly developing quantum physics in the centers of modern physics in Göttingen , Munich and Berlin . After receiving his doctorate in 1911 under Heinrich Rubens at the University of Berlin , he worked as an assistant at the Physics Institute of the University of Berlin.

Together with the physicist James Franck , who also teaches at Berlin University , he designed electron impact experiments in 1912/1913, which later proved to be an essential pillar of Bohr's atomic and quantum theory and which would go down in history under the name of the Franck-Hertz experiment . In 1925 they both received the Nobel Prize in Physics .

In the first World War

From 1914 Hertz took part in the First World War as an officer and in 1915 was seconded to the special force for gas combat , the so-called Pioneer Regiment 35 under the direction of Fritz Haber . Hertz did not take part in the first use of chemical weapons near Ypres on April 22, 1915, because at that time he was testing another section of the front for its suitability for gas attacks. On July 7, 1915, Hertz was seriously wounded in a gas attack on Russian troops in Poland because the wind turned during the attack and Hertz himself was exposed to the gas. After spending several months in a hospital, Hertz was released from the army. In 1917 he completed his habilitation with a thesis on the exchange of energy during collisions between slow electrons and gas molecules and was then until 1920 a private lecturer in physics at the University of Berlin.

In 1920 Hertz took over the management of the physics laboratory of the Philips incandescent lamp factory in Eindhoven for five years , where he dealt with the physics of gas discharge . From 1925 he worked as a professor of physics at the University of Halle (Saale) . After receiving the Nobel Prize for Physics in 1925, Hertz received a call to the Technical University of Berlin-Charlottenburg in 1927 , where he became professor of physics and head of the newly established Physics Institute. In 1931 he was elected a corresponding member of the Göttingen Academy of Sciences .

Persecuted during the Nazi era

In 1935 his examination authorization was withdrawn because of his Jewish ancestors, whereupon he renounced his teaching post (his successor was Hans Geiger ). Although he remained an honorary professor, he preferred to work as director of Siemens & Halske Research Laboratory II in Berlin over “half a professorship” . His apartment was in Berlin-Dahlem , Fabeckstrasse 11. At the research laboratory, he worked on diffusion separation systems for light isotopes , which later turned out to be the central technology in the system of uranium bomb development.

As a nuclear researcher in the Soviet Union

For this reason, Hertz was brought to Sukhumi on the Black Sea by a special unit of the Red Army in April 1945 together with Manfred von Ardenne , Max Steenbeck and other “atomic specialists” . In Agudsera in Sukhumi Hertz had then to conduct a research institute with German specialists - according transcribed G ertz Institute G called, in which his nephew HardWin Jungclaussen six years has worked.

In addition to the work by Nikolaus Riehl on the purest representation of uranium , the groups at Institute G in Agudsera , who developed separating cascades for 235 U generation, received high prizes, including Hertz himself, together with Heinz Barwich, with the Stalin Prize as the highest civilian award in the former Soviet Union.

Return to the GDR

Grave of Gustav Hertz in the Ohlsdorf cemetery in Hamburg

His return as early as autumn 1954 was part of the GDR's preparations for re-entry into nuclear technology. He took over these preparations and in 1955 became head of the Central Scientific Council for the Peaceful Use of Atomic Energy at the GDR Council of Ministers . All preparations, from the concentration of the scattered institutes to the expansion of the new Dresden Central Institute for Nuclear Research (now the Dresden-Rossendorf Research Center ) were carried out there.

From 1954 he was also director of the physical institute at the Karl Marx University in Leipzig , member of the Academy of Sciences of the GDR and founding member of the Research Council of the GDR . In 1958 he was accepted as a foreign member of the then Academy of Sciences of the USSR . He received prestigious awards such as the GDR National Prize and, as the author and editor of a three-volume standard work on nuclear physics, the first volume of which appeared in 1958, was a central figure in the development of nuclear physics in the GDR. In 1975 he died in Berlin as the only Nobel Prize winner ever to have worked in the GDR after the award ceremony.

Gustav Hertz is buried in the family grave of the Ohlsdorf cemetery in Hamburg, with Heinrich Hertz among others.

Gustav Hertz was a son of the Hamburg lawyer Gustav Theodor Hertz (1858–1904) and his wife Anna Augusta nee Arning. His grandfathers were the Senator Gustav Ferdinand Hertz and the district court president Christian Arning . Gustav Hertz had been married to Ellen Dihlmann since 1919. His sons Carl Helmut Hertz and Johannes Heinrich Hertz from this marriage also became physicists. After the death of his wife in 1941, Gustav Hertz married Charlotte Hertz, née Jollasse, in 1942. His nephew Hardwin Jungclaussen , who also worked as a nuclear physicist , emerged from the marriage of his sister Susanne Hertz to the pastor Hermann Jungclaussen . Gustav Hertz's uncle was the famous physicist Heinrich Hertz , the discoverer of electromagnetic waves, after whom the physical unit Hertz (Hz) for frequency was named. Gustav Hertz is buried in Hamburg in the Ohlsdorf cemetery near the grave of his uncle Heinrich Hertz.

During his activity in the GDR, Gustav Hertz lived in a house built especially for him on the course of the Dahme in Berlin-Köpenick , Lienhardweg 47. A memorial plaque was placed there. After him, the long-standing and penultimate President of the Academy of Sciences of the GDR, Werner Scheler, lived in this house until his death in 2018.