The title of this article is ambiguous. Further meanings are listed under Heinrich Hertz (disambiguation) . 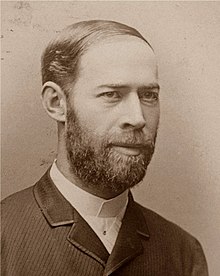 Heinrich Rudolf Hertz (born February 22, 1857 in Hamburg , † January 1, 1894 in Bonn ) was a German physicist . In 1886 he was the first to generate and detect electromagnetic waves in experiments and is therefore considered to be the discoverer. In his honor, the international unit for frequency was called Hertz (abbreviated to the unit symbol Hz ).

Heinrich Rudolf Hertz came from a respected Hanseatic family. His father Gustav Ferdinand Hertz (original name David Gustav Hertz, 1827–1914) came from a Jewish family, but converted to Christianity. He had a doctorate in law, a judge from 1877 and a senator and president of the Hamburg judicial administration from 1887 to 1904 . The mother Anna Elisabeth b. Pfefferkorn was the daughter of a garrison doctor.

Heinrich Hertz had four siblings, the brothers Gustav Theodor (* 1858), Rudolf (* 1861) and Otto (* 1867) as well as the sister Melanie (* 1873). The brother Gustav Theodor Hertz was the father of Nobel Prize winner Gustav Ludwig Hertz and the grandfather of the atomic physicist and information scientist Hardwin Jungclaussen .

Hertz did his Abitur at the Johanneum in Hamburg and then prepared for an engineering degree in a design office in Frankfurt am Main . He broke off his studies in Dresden after the first semester because only the mathematics lectures there could inspire him. After a year of military service, he began to study mathematics and physics at the Technical University of Munich .

In 1878 he moved to the Berlin Friedrich Wilhelms University . He received his doctorate at the age of 23 with a thesis on the rotation of metal balls in a magnetic field and stayed for two years as a research and lecture assistant at Hermann von Helmholtz in Berlin, where he began to investigate the physical nature of cathode rays.

In 1883, Hertz became a private lecturer for theoretical physics at the Christian Albrechts University in Kiel . From 1885 to 1889 he taught as a professor of physics at the Technical University of Karlsruhe .

From 1889 he was professor of physics at the Rheinische Friedrich-Wilhelms-Universität Bonn , after rejecting appointments to Berlin, Giessen and America.

Heinrich Hertz was working in Karlsruhe at the time and continued his research into invisible electromagnetic waves (radio waves). He demonstrated that they propagate in the same way and at the same speed as light waves (see refraction , polarization and reflection ). At the Berlin Academy of Sciences he taught on December 13, 1888 in his research report "About Radiation of Electric Force" on electromagnetic waves. Heinrich Hertz's results provided the basis for the development of wireless telegraphy and radio .

In 1886, Hertz investigated the external photoelectric effect discovered by Alexandre Edmond Becquerel in 1839 . This investigation was continued a year later by his assistant Wilhelm Hallwachs ( Hallwax effect ). The effect played a special role in the formulation of the light quantum hypothesis by Albert Einstein in 1905.

As a Bonn professor from 1889, he continued the investigations into the nature of cathode rays that had already begun in Berlin and, in his last experimental study in 1891, showed that they can penetrate thin metal foils. His assistant Philipp Lenard later expanded this experiment, using a metal sieve with an aluminum foil instead of the thin foil. Cathode rays from the vacuum tube could escape into the air through this “Lenard window”. "For his work on cathode rays" Lenard then received the Nobel Prize in Physics in 1905. 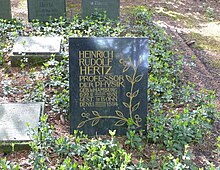 Grave in the Ohlsdorf cemetery

In 1892, after a severe migraine attack, Hertz was diagnosed with Wegener's granulomatosis , and in 1894 he died of it in Bonn. He is buried in the Ohlsdorf cemetery in Hamburg. His wife Elisabeth did not remarry. The two daughters did not marry either and had no offspring.

Heinrich Hertz never defined himself as a Jew and was Lutheran all his life, as his father's family had converted to Evangelical Lutheran Christianity. The name Hertz, a common name among German Jews, did not mean that as a physicist he was exposed to anti-Semitic prejudices. It was only during the Nazi era that people posthumously distanced themselves from the successful scientist , who in the racist jargon of National Socialism was called a “ half-Jew ”. Because of his Jewish descent, his portrait was removed from Hamburg City Hall, and institutions and streets named after him were mostly renamed. There were also considerations to rename the Hertz unit named after him , which had been introduced internationally in 1933, while retaining the abbreviation “Hz” in “Helmholtz”.

His daughter, the biologist Mathilde Hertz , and his nephew, the Nobel laureate in physics, Gustav Hertz, were removed from the public service under the law to restore the civil service. Mathilde Hertz emigrated to England in 1935, where her mother and sister followed in 1936. 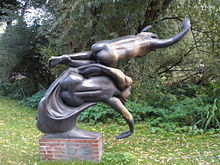 Bust on the south campus of the Karlsruhe Institute of Technology

The following were named after Hertz: 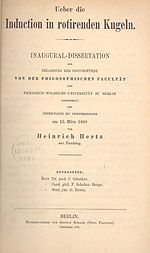 About induction in rotating spheres
(Berlin, 1880)