The Germany radio is a broadcasting company in Germany, the three nationwide radio programs produced: Germany radio ( Dlf , the broadcasting center in Cologne ), Germany radio culture ( Dlf culture , in Broadcasting House on Hans-Rosenthal-Platz Berlin) and Germany Radio Nova ( Dlf Nova , the radio station of Cologne) . Together with ARD and ZDF , Deutschlandradio forms the public broadcasting service in Germany . As a multi-country institution , it is subject to the sovereignty of allFederal states .

Deutschlandradio is a not-for-profit corporation under public law founded on January 1, 1994 , partly with the structure of a radio station. Double seat is Cologne and Berlin ; the headquarters of the directorship and administration are mainly in Cologne. From April 1, 2009 to August 31, 2017, Willi Steul was the general manager and, since September 2011, Andreas-Peter Weber was the program director. The administrative and operational management has been headed by Rainer Kampmann since 2014 . On September 1, 2017, Stefan Raue , editor-in-chief of the MDR , elected on June 8, took over the management.

It has an annual budget of around 249 million euros (2020). The budget volume and the number of employees are somewhat below the level of a medium-sized state broadcaster, which, however, also produces television. However, Deutschlandradio, as an independent, national radio pillar of public broadcasting, is only comparable to a limited extent.

With the shutdown of the long-wave transmitters on January 1, 2015, Deutschlandradio's programs for the area of ​​Germany will only be broadcast over DVB-S . Due to the limited number of FM frequencies available, Deutschlandradio relies on DAB + in particular. The digital radio standard now covers 98 percent of the area in Germany. 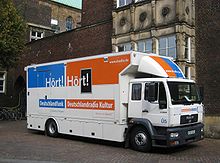 Funkhaus Berlin , photo from 2012 with the RIAS logo at the top right

The creation of the corporation under public law Deutschlandradio (until March 2005 written DeutschlandRadio ) was agreed on June 17, 1993 through a founding treaty for national radio and a transitional treaty between the federal government and the states. The Effective Date January 1, 1994 was also the date it began broadcasting. The founding director is the then director of ZDF, Prof. Dieter Stolte; the television editor-in-chief of the SDR, Ernst Elitz, is elected on March 3, 1994 by the radio council as the first director of the new station.

The state treaty on national radio stipulated that a national German-language radio program should be produced in Berlin and Cologne. In 2010, with Dradio Wissen, a further, exclusively digitally distributed offer was added. The programs are free of advertising and are financed with 50 cents from the broadcasting fee. In addition to the advertising-free offer, the principles include high-quality journalism and a program mainly focused on information and culture that reflects the federal diversity and can be received anywhere in Germany.

ARD and ZDF are both sponsors and members of the corporation . There is no such thing as a membership body that is common to corporations.

The management of Deutschlandradio is incumbent on the director, who is elected by the radio council at the suggestion of the board of directors for a term of five years. The radio and administrative boards act as supervisory bodies.

The members of the eight-member board of directors are appointed for five years - two representatives each from ARD and ZDF, three country representatives from the prime ministers and one from the federal government. Tasks are the creation of a statute for the corporation, the appointment of the directors, the support of the director - especially with economic or technical questions - as well as the control of the director, regulations of his employment relationship like conclusion of the employment contract or dismissal from it. The council also decides on the budget and the annual accounts drawn up by the artistic director and forwards both to the radio council for approval. A special feature is that the board of directors can propose candidates for the office of artistic director.

The chairman of the board of directors has been WDR director Tom Buhrow since March 2019 . In 2002 the MDR director Udo Reiter and in 2004 the ZDF director Markus Schächter chaired the committee.

The Radio Council consists of 45 members. The term of office is five years. The composition is intended to express social diversity.

The Radio Council is, so to speak, the " parliament " of the Deutschlandradio corporation and the control body on the program side. He creates guidelines for the program, checks compliance with the provisions contained in the founding state treaty and elects the director. Like the Board of Directors, this body not only has a controlling role but also an advisory role. After the criticism of the excessive influence of the state in the committees and the ruling of the Federal Constitutional Court on the composition of the supervisory bodies of public media, the remoteness of the committees is to be ensured by the fact that the proportion of state and state-affiliated members is a maximum of one third.

Deutschlandradio broadcasts a total of three radio programs and one special channel:

Deutschlandfunk is the information and cultural program. The name DeutschlandRadio Köln , established in 1994 when the DLR was founded , has not caught on.

On January 18, 2010, DRadio Wissen started as the third full program . Under the motto “The brain wants work”, his program items are agenda (current knowledge), nature (exact sciences), media (communication, journalism and knowledge organization), globe (worldwide close-ups of what moves people), culture (philosophy, history , Social sciences and pop culture), my future (career and opportunities in school, apprenticeship and studies) and leeway (brain gymnastics for the ears). There were also takeovers (“Radiolinks”) from other ARD radio stations and international broadcasters ( RFI , BBC , Radio SRF ). The website won the Grimme Online Award in 2011 for the concept and the editing.

Since February 2014, DRadio Wissen has been broadcasting as a youth radio, especially for young adults, with a new program scheme and a new direction. The music color is heterogeneous, editorially selected pop music, the word share is still high, but less than before. In addition to a morning show and a new daily program, various themed programs were introduced for the evening. The editorial conference and lecture hall have been preserved from the old scheme . Since March 2019, the program has been broadcasting a moderated evening program under the name "Ab 21" from Berlin. Unlike Deutschlandfunk and Deutschlandfunk Kultur , Deutschlandfunk Nova cannot be received via FM , but only via DAB + .

Since November 2010, the broadcaster has been publishing part of its news (category “knowledge news”) under the CC-NC-ND license (non-commercial and no changes) with appropriate labeling.

On March 1, 2017, Deutschlandradio launched its own news portal under the name Dlf24 . This was renamed on April 17, 2019 in Deutschlandfunk - Die Nachrichten .

In August 2017, the institute launched an app called Dlf Audiothek for iOS and Android operating systems. The three programs can also be heard in the live stream , and the application also offers an audio media library and a search function for older posts.

With its programs, Deutschlandradio produces numerous podcasts such as “Der Tag”, “One Hour History” or “Lakonisch Elegant”. The podcasts can be heard on the programs' websites and via podcatchers.

Sound body of the Deutschlandradio

Deutschlandradio does not have its own orchestra ( radio orchestra / choir), but is the main shareholder of the radio orchestra and choir gGmbH, which has existed since January 1, 1994 . This is the carrier of the following sound bodies:

All three programs can be heard nationwide digitally via the Astra satellite system of SES SA and via DAB + as well as online via live stream. Programs are broadcast via antenna via regional DAB + transmitters, depending on the network expansion (currently mainly in metropolitan areas ). According to the state treaty, Deutschlandfunk Nova is only broadcast digitally in order to promote the “urgently needed acceptance of digital broadcasting channels for radio”. Broadcasts in the standard DRM , as well as broadcasts on shortwave , are no longer carried out.

Similarly , the programs Deutschlandfunk Kultur and Deutschlandfunk were broadcast regionally via VHF . The medium wave transmitters were switched off on December 31, 2015. The nationwide analog broadcast of the programs, which took place via long wave , was switched off without replacement on January 1, 2015. According to the head of the Technology and Infrastructure department, Deutschlandradio is following the requirements of the Commission for determining the financial needs of broadcasters (KEF) with what he believes is cost-intensive and inefficient long-wave broadcasting . The KEF had pushed for a shutdown and justified this with KEF's own reports, according to which the use of this technology is decreasing and the digitization of radio is progressing at the same time. Deutschlandradio is now investing the savings in the further expansion of the DAB + transmitter network.

The FM -Sendeanlagen to disseminate the programs of Germany radios since July 1, 2018, two-thirds from Düsseldorf network operator Uplink Network operated GmbH. The remaining systems of Deutschlandradio are operated by other public broadcasters such as HR, BR, NDR, RB, SWR and WDR. The DAB + transmitter network (channel 5C) is operated by Media Broadcast . The only station owned by Deutschlandradio for broadcasting Deutschlandradio Kultur's programs on UKW (in Berlin-Britz ) was switched off in 2013. This broadcasting location was completely abandoned in 2016.

A list of the live streams can be found in the articles on the programs.

Sea weather reports were broadcast daily at 1:05, 6:40 and 11:05 a.m. via the Neumünster medium-wave transmitter (1269 kHz) operated by Deutschlandfunk . Since the switch-off of the medium wave, the sea weather report has been broadcast daily at 1:05 am, 6:40 am and 6:10 pm on the special digital channel "Documents and Debates" via DAB +, via DVB-S in ZDFvision and as a live stream on the Internet.

The sea weather report can also be found on the Deutschlandradio website (text and audio on demand). Free apps are available for Android and iPhone, including: contain the sea weather report. There is also a telephone announcement under the number: +49 (0) 221 345 29918