The title of this article is ambiguous. Further meanings are listed under Parliament (disambiguation) . 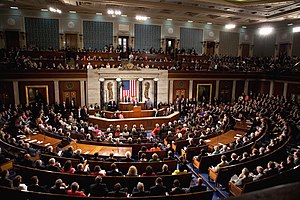 Example of a modern parliament: The US Congress during a government statement by President Barack Obama .

The parliament (from old French parlement 'talk'; French parler 'talk') is the political representation of the people , which usually consists of one or two chambers or houses ( one-chamber system or two-chamber system ), but can also be made up of three chambers ( three-chamber system ) can. In the constitutional sense, parliament is understood to be the representative body elected and legitimized by the people of the state in representative democratic states , which exercises the legislative power ( legislative ) and, among other things, controls the government and administration ( executive ). However, there are also parliaments in countries with a non-democratic political system.

Every democratically constituted nation state ( unitary state or federal state ) has a parliament at the national or federal level. In federal states, there are also parliaments at the level of the member states , as this state quality and thus a limited, shared sovereignty under constitutional law with its own political system (executive, legislative and judicial ).

In the figurative and broader sense, other political assemblies are also referred to with the term. However, these meetings do not constitute a direct or only partially legitimized by the people People's representatives are:

In contrast, according to prevailing opinion and state practice, the representative bodies of the residents of local authorities (without their own statehood) in Germany, France, the Netherlands, Austria and other states are not parliaments with legislative powers in the sense of state law. In Germany, this includes the organs of the municipalities (e.g. municipal council ) as well as the bodies working for districts and other bodies under public law belonging to indirect state administration . They are part of the executive branch there, since from the prevailing constitutional point of view the municipalities as a whole are merely self-governing bodies within the state executive.

Structure, tasks and functioning of parliaments

In one democracy , the representatives of a parliament are determined by elections , in other systems of government appointments also take place.

In democratic states, in addition to legislating , parliament also exercises budget rights and controls the government . MEPs have the right to obtain information from the government and individual ministers and, if necessary, to motion of no confidence . The regulations for this are laid down in the constitution of the respective state and in the parliamentary rules of procedure .

Around 30 to 40 percent of parliaments worldwide consist of two chambers; the members of the smaller chambers are often not elected directly but are sent by member states. Important organs are parliamentary president and deputy, parliamentary group chairmen of the parliamentary parties and the thematic committees in which the bills are prepared.

With regard to the working method, a distinction is made between so-called working and speech parliaments:

The delegate assemblies of parliamentary assemblies are sometimes also referred to as parliament in the broader sense . In many cases, party congresses also have the function of a “party parliament”, although their delegates cannot always be elected, but can also be appointed or nominated.

Parliaments whose members only work on a voluntary basis or part-time are referred to as after-work parliaments .

The following explanations for the above list are particularly noteworthy:

The English parliament developed from the aristocratic advisory circle of the Anglo-Saxon kings, the witan . It was not only represented by personal confidants of the king, but also by aristocrats and nobles as well as high clerical dignitaries who, because of their power, were entitled to membership. The advice of the king by the witan was understood not only as a duty of his members, but also as their right. So the king was obliged to seek advice. Under the early Norman kings, parliaments were only convened as needed when important issues were to be discussed (these meetings coincided with the Christian celebrations of Easter and Christmas). The history of the Anglo-Saxon Witan ended with the invasion of the Normans in 1066, who replaced it with a curia regis (court of the king); however, it was still known under the traditional names Witan or Witenagemot until the 12th century .

On January 20, 1265 invited Simon V. de Montfort , who against his brother-in-law Heinrich III. rebelled, his supporters without prior royal approval to a parliament. In addition to 120 churchmen and 23 earls, two knights from each county and two citizens from each borough were invited - the first time that commoners took part in an English parliament. De Montfort's new rules were formally confirmed in 1295 by Edward I with the Model Parliament . Over time, the English parliament developed from this. After the Wars of the Roses in the 15th century, Parliament increased its self-confidence and power, as did the number of members. Parliament saw itself not only as an advisory, but increasingly as a control body vis-à-vis the king. In addition, it claimed the function of the Supreme Court and above all the right to approve taxes. Even the summoning was no longer solely dependent on the will of the king. The members of parliament were increasingly able to meet on their own initiative. However, this also made the English Parliament more and more the scene of disputes between the country's aristocratic groups.

In the France of the Ancien Régime , Parlement was a court of law that was considered to be one of the oldest institutions in the empire. Parliament was able to confirm or correct the royal jurisprudence by referring back to the king, especially in the 18th century, a law on "remontrance". The various chambers of parliaments were differentiated according to their areas of jurisdiction: "grande chambre", "chambre des enquêtes", "chambre de requêtes", "tournelle criminelle" and also the "chambre de l'édit" (until 1685, see revocation of the edict from Nantes ). Especially in the 18th century the parliaments were considered a refuge for the opposition of parts of the nobility (“ noblesse d'épée ” as well as the “ noblesse de robe ”) as well as parts of the third estate against an absolutism perceived as despotic, to which the Jansenist opposition to the Jesuits and the Gallican opposition to the ultramontane church.

The current French parliament has consisted of a Senate and a National Assembly since 1958 .

The first Polish Sejm in Łęczyca 1180 (painting by Jan Matejko )

The general Polish parliament - the Sejm walny - was established at the end of the 14th century. It was composed of representatives of the state parliaments - Sejmiki - who in turn were elected by the aristocratic population groups. The nobility made up 10-12% of the population in the Polish-Lithuanian Rzeczpospolita . The Sejm walny met once a year and for the election of a king. With the privileges of 1454, the role of Sejm walny grew and he wrested more and more rights from the king in favor of the nobility. With the Nihil Novi constitution - “Nothing about us without us” - from 1505, the legislature was transferred to the Sejm walny , and the king was no longer allowed to enact any laws without its express consent. During this time, the Sejm walny was transformed into three chambers - “three estates” - the Sejm (House of Representatives), the Senate (King's Council) and the King. A far-reaching reform was told the Sejm walny with the Lublin Union of 1569, the Real Union between the Kingdom of Poland and Grand Duchy of Lithuania created and the Warsaw Constitution of 1573 , in particular the political equality of all denominations in the Sejm, civil rights and the freedom of religion guaranteed. It was also determined that the Sejm should meet at least once every two years. At the end of the 16th century the meeting place of the Sejm walny was moved from Petrikau to Warsaw . From 1673 he met every third time in Grodno . In 1654 the Liberum Veto was used for the first time, which stipulated the unanimity of resolutions. If only one MP voted against a project, then negotiations had to be continued. The four-year-old Sejm , who met in the Royal Castle in Warsaw from 1788 to 1792 , enacted the constitution of May 3rd in 1791 , the first modern, liberal constitution in Europe in terms of the Enlightenment and second in the world after the USA . With the Third Partition of Poland , the Polish-Lithuanian state was destroyed by Prussia , Austria and Russia in 1795 and the Sejm walny was dissolved. In the Polish Duchy of Warsaw (1807-1815) established by the French Emperor Napoleon I and at the beginning of the Russian-dominated Kingdom of Poland (1815-1831) there was a Polish Sejm in Warsaw. After 1867, a Polish state parliament was set up in Lemberg in Austrian Galicia . It was not until the Second Polish Republic (1918–1939) that an all-Polish Sejm was formed with two chambers (Sejm and Senate). In the People's Republic of Poland , after the end of World War II in 1945, there was only one Sejm with one chamber. After the end of communism in Poland in 1989, the Senate was reinstated.

The first democratically elected German parliament was the Frankfurt National Assembly of 1848 in the Paulskirche . The resolution on the Paulskirche constitution was passed here, but it was never implemented.

On the European continent, the Europe-wide liberal movement succeeded only in Switzerland in establishing a permanent national and constitutional state with a purely parliamentary system with the constitution that came into force in 1848.