This article or section needs to be revised. Details should be given on the talk page. Please help to improve it , and then remove this mark.

The General Assembly examines and approves the budget of the United Nations (Art. 17 I UN Charter ). Her further tasks include the deliberation and the adoption of recommendatory resolutions . The General Assembly may deal with practically any question of international importance as long as it is not dealt with at the same time by the UN Security Council (Art. 12 Paragraph 1 UN Charter).

In contrast to the resolutions of the UN Security Council, those of the UN General Assembly are not binding under international law , but can have political weight because they represent a decision by a majority of the member states. That does not mean, however, that its decisions have to have no effect under international law: The UNGA resolutions can, under certain conditions, contribute to the development of binding customary international law . In addition, the decisions of the UNGA, which concern internal organizational matters such as administrative or budget matters (budget), are binding for the Secretariat .

In order to facilitate the work, the General Assembly has set up committees ( committees ) on various topics, which in turn can convene working groups . 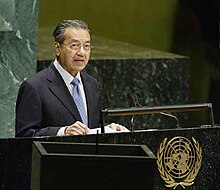 The main committees of the General Assembly are in detail:

Each member state has one vote in the General Assembly (Article 18 of the UN Charter), which means that the vote of every state is equally valuable. Criteria such as size, population or economic strength are irrelevant. In the case of important questions, resolutions are passed with a majority of two thirds of the members present and voting. These include, for example:

On other issues a resolution is passed with a simple majority.

When voting, approvals, votes against, abstentions and non-votes (mostly due to absenteeism) are recorded. Subsequent entries are sometimes also recorded.

According to Resolution 377A (V), which was adopted by the General Assembly on November 3, 1950, there is the possibility of calling emergency meetings within 24 hours if the UN Security Council is unable to take a decision or take action to take to maintain international peace and stability. The latter is usually the case when the Security Council is divided, i.e. blocked by a veto by one or more of its members. Such emergency meetings are called if at least seven representatives of the states represented on the UN Security Council or a majority of the UN member states so request. The plenary meeting called by emergency meeting can then decide on measures to resolve a crisis with a two-thirds majority of the members present. This also includes military measures.

There have been ten emergency meetings in the history of the United Nations:

In the course of reform efforts, it was proposed to add a parliamentary assembly at the United Nations to the nation system, which could consist of delegates . Such a body could be set up as a subsidiary body to the General Assembly in accordance with Article 22 of the UN Charter or as a main body in accordance with Article 108 of the same. The establishment of an international organization that would be linked to the United Nations through a cooperation agreement would also be conceivable .