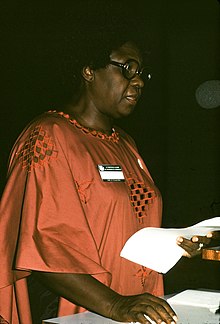 Brooks completed his law studies at various universities in the United States and in London with a doctorate . In 1953 she was the first woman to be admitted to the bar in her home country of Liberia. She also taught law as a professor in Monrovia from 1954 to 1958 and represented her country from 1954 as ambassador to the United Nations . During her time as UN ambassador, Brooks was also Liberia's Deputy Foreign Minister from 1958. Within the United Nations, Brooks was heavily involved in the bodies responsible for the administration of the UN trust territories ; in 1964 she headed the UN Delegation to the Trust Areas in the Pacific, and in 1966 she was the UN Committee on the Trust Areas.

Brooks also represented her country as an ambassador to Cuba . Finally, in 1977, Brooks-Randolph became the first woman to become a Supreme Court Justice in her homeland.