The Antillean state of Antigua and Barbuda is one of the so-called Leeward Islands . It is located between the Caribbean and the Atlantic Ocean , approx. 650 km southeast of Puerto Rico . The total area of ​​442.6 km² - located on land - includes two main and a few smaller islands. The largest is the 280 km² island of Antigua , on which the capital Saint John’s is also located. Barbuda covers 161 km² and is 48 km north of Antigua. 56 km southwest of Antigua is the only 1.6 km² large uninhabited rock island of Redonda . Other islands over 1 km in length are Long Island , Guinea Island and Green Island off the coast of Antigua, as well as the spit 11 Mile Beach on Barbuda.

Even if the main island of Antigua is mainly made up of limestone formations , it goes back to a submarine volcano that erupted in the southwest of the island about 34 million years ago. With the growth of hard corals , calcium deposits spread to the northeast. The highest point of the island and at the same time of the island state is the 402 m high Mount Obama , formerly Boggy Peak . It is the remainder of the volcanic crater in southwest Antigua. Barbuda is the surface of a large coral reef. The highest point of the still largely untouched and natural coral island rises only 44.5 m from the sea. The coastlines of the two main islands are extremely richly structured. They have a number of beaches, lagoons and numerous natural harbors (bays). The islands are surrounded by a number of coral reefs and shallows . The small rock island Redonda is the remainder of a 296 m high extinct volcano.

The climate is tropical . Average monthly temperatures range from 22 (December to February) to 30 ° C (June to September). With an average annual precipitation of 900 to 1000 mm, it is relatively dry by Caribbean standards. Most of the precipitation falls between September and November. In summer (July to October) there is a risk of tropical cyclones .

See also : List of Places in Antigua and Barbuda

In 2017, 94,731 people lived there. A large part of the population lives on Antigua, Barbuda only has about 1600 inhabitants (as of 2011), Redonda is uninhabited. The population development has been almost entirely positive over the past 50 years. Between 1961 and 1969 the population grew from 55,000 to 65,000. After that, it stagnated at around 63,000 until the early 1990s. From 1993 onwards there was a renewed increase to the current level. The fertility rate (TFR) is 2.0 (Germany 1.46) just above the conservation level and causes low natural growth. In contrast, however, the infant mortality rate is four times as high as in Germany. The migration balance is also negative; In 2005 alone, 420 people left the island nation. In 2017, 28.1% of the population was born abroad.

The following figures show the status of 2017 (excluding tourists).

Common languages ​​are English (the official language) and a Creole language based on it . Ethnically, the population consists of 87.3% black Africans and 4.7% mixed race. There are also Europeans and Asians.

From around 10,000 BC. Indians from the Siboney tribe ("stone people") settled the islands. By 1200, the Arawak Indians displaced the Siboney from the Orinoco region . Subsequently, Caribs invaded from South America and spread in the area.

In 1493, Christopher Columbus landed in Antigua. In the following years, the Indians living on the islands were deported to Hispaniola and other Spanish colonies by the Spaniards for slave labor . A large part of the Indians died within a short time as a result of work or illness. After 1500 the Spaniards, French and British tried alternately, each unsuccessfully, to settle the islands permanently and to bring them into their possession. Pirates used the islands as retreats at that time.

Barbuda (1628) came into British possession over 100 years later. However, efforts on the part of the government to colonize the area failed. Four years later, Antigua was colonized by British settlers from St. Kitts and Nevis . The settlers first grew tobacco there. The first settlers from England arrived there in 1663. The first permanent settlement was also built on Barbuda in 1666.

In 1680 large parts of Barbuda became the property of the Codrington family, who established the place named after them as an administrative center. Five years later, sugar cane plantations were set up on the islands , most of which were managed by African slaves. 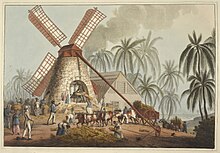 Admiral Horatio Nelson built a British naval base on Antigua in 1784 . Due to the storm-proof port, English Harbor was expanded to become the headquarters of the fleet stationed in the Antilles. The fleet presence drove away the last of the pirates. The slavery was abolished in 1834, making the plantations , the economic base was lost, ushering in a difficult period of economic downturn and restructuring. In 1860 Antigua and Barbuda were united; the name of the colony was just Antigua.

Under the leadership of the future Prime Minister Vere Cornwall Bird, an independence movement formed from 1940. Six years later, the islands received their own parliament. The women's suffrage was introduced in the 1951st Antigua and Barbuda received the status of an independent colony in 1956. From 1958 to 1962 the islands belonged to the province of the West Indian Federation .

The islands joined the West Indies Associated States group in 1967 . This gave them complete domestic political autonomy; foreign policy issues were taken care of by Great Britain. In May 1968 the state became a member of the Caribbean Free Trade Association (CARIFTA). The sugar cane industry, which had dominated for centuries, was discontinued in 1972. On November 1, 1981, the islands gained independence from Great Britain under the new name of Antigua and Barbuda.

The state has been a constitutional monarchy belonging to the Commonwealth of Nations since 1981 . The structure of the political system is based on the British model. Antigua and Barbuda is a member of CARICOM , the OECS and the OAS and is one of the sponsors of the University of the West Indies .

Executive: The head of state is the monarch of the United Kingdom , represented by a governor-general . This office has been held by Rodney Williams since August 14, 2014 . The real government power rests with the Prime Minister , who relies on the majority of the MPs in the House of Representatives . The office of prime minister was between 1967 and 1971 and 1976 and 1994 Vere Cornwall Bird and his son Lester Bird between 1994 and 2004 . He was followed by Baldwin Spencer , who served from 2004 to 2014. Gaston Browne has been acting Prime Minister since 2014 . The Prime Minister appoints the members of his government from among the ranks of parliament. As of 2018, the cabinet comprised 13 ministers. Unlike the United Kingdom, Antigua and Barbuda has a written constitution.

Legislature: The parliament, which has existed since 1946, consists of two chambers : a House of Representatives and a Senate with 17 seats each. While the members of the Senate are appointed by the Governor General, the members of the House of Representatives are determined in elections that take place every five years. The last parliamentary elections took place as early elections on March 21, 2018. With 59.39% of votes won the Labor Party (Antigua Labor Party, ALP) election. It received 15 seats and continues to provide the Prime Minister. A seat was accounted for by the United Progressive Party ( United Progressive Party , UPP) and a seat to the People's Movement of Barbuda ( Barbuda People's Movement ).

Active and passive women's suffrage has existed since 1951.

The state is divided into six administrative districts ( Parishes ) and the two secondary areas ( Dependencies ) Barbuda and Redonda .

The share of government expenditure (in% of GDP) in the following areas was: 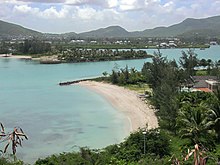 There is no regular rail network on Antigua and Barbuda. However, there is a 77 km long narrow-gauge network that is used to transport sugar cane . It includes lines with a gauge of 760 mm (64 km) and 610 mm (13 km).

The main burden of transportation is on road traffic. In 2011, the road network was 1,170 km long. Of that, only 386 km were paved. There are no motorways at all. Overland traffic is handled by some bus routes. In 2013, almost 30,000 vehicles were registered in the island state.

The international airport VC Bird International ( IATA airport code: ANU) is located in the northeast of the island of Antigua, about eight kilometers northeast of the capital Saint John's. It was laid out as an American military base during World War II and today has a 2744 m long runway. From there flights to North America and Europe are offered. There are flights to Puerto Rico (one hour), Miami (three hours), New York (four hours), Baltimore (four hours), Toronto (four hours), London (eight hours), Paris (eight hours) and Frankfurt am Main (nine hours). The airport is the home base of Caribbean Airlines , which flies to destinations in the Lesser Antilles and South America from Antigua . The following airlines also fly daily to weekly to St. John's on Antigua: Air Canada , American Airlines , Continental Airlines , Delta Airlines and US Airways . Other airlines offer their flight services to Europe: British Airways , Virgin Atlantic , Sunsail Airways and Condor Flugdienst . LIAT , Air St.Kitts / Nevis , Carib Aviation , Caribbean Airlines, Montserratt Airways and Caribbean Star Airlines Ltd connect St. John's with most of the islands in the Caribbean.

The overseas port is also located in Saint John's and is used by cruise ships, among others. In 2005 a total of 981 ships with a size of over seven million gross tons were registered under the flag of the island state . But underneath seized 953 ships, the flag of Antigua and Barbuda as a flag of convenience . 1094 of the flagged ships came from Germany.

Member States of the Bolivarian Alliance for America (ALBA)