The title of this article is ambiguous. Further meanings are listed under Montserrat (disambiguation) .

Montserrat is an island in the Caribbean and belongs to the Lesser Antilles . It is part of the West Indies and an overseas territory of the United Kingdom . Its name goes back to Christopher Columbus , who sighted the island on his second trip to America in 1493 and named it after the monastery of Santa Maria de Montserrat in Catalonia .

The island is southwest of Antigua , southeast of Nevis and northwest of Guadeloupe .

It is of volcanic origin and essentially consists of three volcanic massifs: the Silver Hills in the north, the Center Hills in the middle and the Soufrière Hills in the south. The volcanic complexes get younger from north to south. The Silver Hills were active 2.6 to 1.2 million years ago, the Center Hills 950,000 to 450,000 years ago and the Soufrière Hills volcano, which is still active today, was formed around 175,000 years ago. The remains of the old volcanic centers Silver Hills and Center Hills still characterize the interior landscape of the islands as steep hills up to 741 meters (Katy Hill). The flanks of the ancient volcanic domes are covered by soft volcanic sediment deposits ( ash , tuff , pumice , deposits of debris and mud flows ).

Montserrat has a tropical climate with temperatures between 23 and 30 ° C. Precipitation falls throughout the year, which is broken down into the rainy season (July to November) and the dry season (February to April). 70 percent of the annual groundwater renewal takes place between July and December. The west side of the island and the Center Hills have a rainy microclimate and therefore lush rainforest vegetation. In contrast, the northern Silver Hills and the east coast of the island are characterized by an arid microclimate and mostly overgrown by dry thorn bushes.

About 290 meters off the north coast lies the tiny rocky island of Little Redonda ( measuring less than 1000 square meters) (not to be confused with the island of Redonda, which is located about 21 kilometers northwest of Antigua and Barbuda ).

Geoscientists date the last eruption on Montserrat to the 16th century, thus before the colonization of the island by Europeans. The first historically documented eruption is therefore also the island's youngest phase of activity: after a 370-year break, swarms of earthquakes announced the imminent eruption of the Soufrière Hills volcano from 1992 onwards. The volcano has been active since 1995 and devastated a large part of the island including the capital Plymouth in the course of the eruption . The activity of the volcano initially followed a cyclical pattern of two to three years of high eruption activity ( volcanic eruptions , pyroclastic flows and the build-up of a lava dome ) alternating with three to four year periods of volcanic inactivity on the surface, but persistent soil deformation due to renewed pressure build-up in the interior of the earth. A partial cathedral collapse in 2010 marks the last eruptive activity (as of June 2020). However, geodetic measurements show a further increase in pressure in the magma chambers .

Due to the volcanic eruption, two thirds of the island and a radius of ten nautical miles around the southern part of the island are designated as a restricted area. Navigating the coastal waters is risky because there are no current sea charts. When volcanic activity permits, guided tours of the island's restricted area are offered. Further information about the volcano, its monitoring and the current danger situation can be obtained from the Montserrat Volcano Observatory (MVO) (visits possible).

Montserrat has 4649 inhabitants (as of 2018). At the time of the 2011 census, Look Out was the largest settlement with 670 inhabitants. 88.4 percent of the population are of black African descent , followed by mixed race with 3.7 and Hispanics with three percent (all data as of 2011).

Montserrat has been populated for around 7,000 years. From 400 BC Arawak immigrated to the region , who made up the majority of the population until the European conquest. In the 15th century they were conquered by the warring Caribs . However, the Arawak culture remained dominant. In 2016, the first petroglyphs were discovered on the island, the age of which experts estimate to be 1,000 to 1,500 years. Further investigations should determine the time of origin more precisely and clarify the possible meaning of the signs.

Christopher Columbus was the first European to sight the island on November 3rd, 1493 and took it under the name of Santa Maria de Montserrat , after the famous Montserrat monastery in the mountains of the same name in Catalonia ( Spain ), for the Spanish crown. However, the island of Montserrat was never settled by the Spaniards.

The English took advantage of the Spanish lack of interest and founded a first settlement in 1632. The tensions between Catholics and Anglicans in the motherland which culminated in the English Civil War had reached the Caribbean. The Irish residents of the neighboring island of St. Kitts were relocated to Montserrat. Irish immigrants from other British colonies in America were added later. Even today, a large part of the inhabitants of European descent are of Irish descent.

1674 formed Montserrat together with Antigua , St. Kitts and Nevis a confederation of English island colonies with a common House of Representatives under the governor Wiliam Stapleton.

The settlers grew tobacco , sugar cane and cotton . West African slaves were introduced to work in the fields . Their descendants form the majority of the population today. In 1838 slavery was abolished.

From 1871 to 1956 Montserrat was part of the Federal Colony of the Leeward Islands , and in 1958 it became a member of the West Indian Federation . After the dissolution of the federation in 1962, the islanders voted to become a British crown colony again. The territory has been on the UN list of sovereign territories without self-government since 1946 .

In September 1989, the island was hit with full force by Hurricane Hugo and severely destroyed.

Much of the island was devastated by a series of Soufrière Hills volcano eruptions that began on July 18, 1995. The only airport in Montserrat was also affected . 75 percent of the population fled the island. The capital Plymouth was officially abandoned in 1997 because of the volcanic eruptions. A transitional government seat was established in Brades on the northwestern end of the island.

In February 2005, the terminal of the new John A. Osborne Airport on the northern half of the island was inaugurated by Princess Anne ; on July 11, 2005, the airport was officially opened. A new capital is under construction in Little Bay .

September 17th is a "fateful day" for the residents of Montserrat, combined with three catastrophic events:

Montserrat is a British overseas territory based on the constitution of 2010. It is a member of CARICOM and the OECS and is one of the sponsors of the University of the West Indies .

The head of government of the island is the premier of Montserrat .

The defense of the island is the responsibility of the British armed forces . With the Royal Montserrat Defense Force, founded in 1899, Montserrat maintains a volunteer force of around 20 soldiers who mainly perform ceremonial tasks. 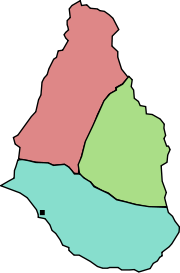 The communities in the east and south are in the restricted zones that were established after the eruption of the Soufrière Hills volcano, and only exist de jure . The entire population is concentrated in the Parish of Saint Peter in the northwest of the island, where the provisional seat of government Brades is also located.

Originally there was a fourth Parish St. Patrick (now the eastern part of St. Anthony).

The Montserrat economy was hit hard by the 2005 volcanic eruptions. The nominal gross domestic product, at about 73 million in 1994 US dollars had been lying, fell to 2001 to less than half that value. In 2018, GDP was nominally around $ 62 million. Public administration generates around a third of the total added value.

There is left-hand traffic . After the destruction of WH Bramble Airport by the Soufrière Hills eruption in 1997, Montserrat could only be reached by ship or helicopter until the newly built John A. Osborne Airport in northern Germany on July 11, 2005 for around US $ 18.5 million Island was opened.

In the 1980s, the " Air Studios " of the former Beatles producer George Martin , who lived temporarily on Montserrat , were located on Montserrat . A number of well-known musicians recorded famous albums in the studios. B. Dire Straits , The Police , Orchestral Maneuvers in the Dark , Paul McCartney or Phil Collins . Many of these artists took part in the “ Music for Montserrat ” charity concert for the benefit of the island on September 15, 1997 in London's Royal Albert Hall .

Ian Anderson , front man of the band Jethro Tull , processed events in Montserrat in the song of the same name on his third solo album ("Secret language of birds").

The poet and playwright EA Markham (1939-2008) was born in Harris on Montserrat, and since 1956 he has lived mainly in England. He toured the Anglophone Caribbean with the Caribbean Theater Workshop from 1970 to 1971.

Montserrat is an independent member of FIFA and CONCACAF and takes part in their competitions with its own team . As a rule, Montserrat loses very high and is traditionally one of the last positions in the FIFA world rankings . A portrait of football on Montserrat is offered by the documentary “ The Other Final ”, which reports on the international match against Bhutan , the second bottom of the FIFA world rankings, which took place in 2002 parallel to the World Cup final . Montserrat lost the game in Bhutan 4-0.