In volcanology, the term volcanic ash refers to very small pyroclasts of any shape (<2 mm) that arise during an explosive eruption of a volcano. Volcanic ash, together with the volcanic lapilli (> 2 mm), the volcanic bombs (> 64 mm, rounded, originally melted) and the volcanic blocks (> 64 mm, angular, already solid at the time of ejection) form the pyroclastic sediments . These are also called tephra if they are not yet solidified or pyroclastic rocks after solidification.

Volcanic ash has a positive effect on soil improvement , but as an ash cloud it has a negative effect on health, the climate and the safety of air traffic .

The well-known ash , which consists of mineral combustion residues of organic material (cigarette ash, wood ash), has nothing to do with ash in the volcanological sense. 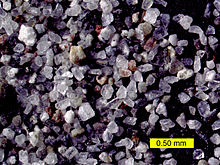 A sample of ash from the 1980 eruption of Mount St. Helens, Washington, at high magnification 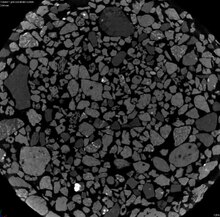 Play media file
“Flight” through the µCT stack of images of a sample of volcanic sand from the southern tip of Iceland. Different grain sizes (partly already in the lapilli range), porosities and densities are visible.

Volcanic ash is defined solely by grain size, i.e. H. the chemical-mineralogical composition and the shape of the components are irrelevant. The term ash in the volcanological sense simply refers to pyroclasts that are smaller than 2 mm. Volcanic ash consists of fine lava shreds, glass fragments , finely ground volcanic rock or even single crystals. According to the definition of the IUGS ( International Union of Geological Sciences ) in

According to the older division by Sohn and Cough (1989), the ash fraction can also be divided into three:

It is currently used in part in parallel to the IUGS recommendation above.

Volcanic deposits including layers of ash in Weibern in the Eifel

If volcanic ash is solidified (lithified) to a pyroclastic rock, this is called tuff or more precisely ash tuff if it contains more than 75% ash particles. The term "tuff" is or was ambiguous in the literature, which is why the term "ash tuff" is preferable. Ash tuff can be further subdivided into coarse ash tuff and fine ash tuff (or dust tuff ).

Effects of volcanic ash on the climate

Ash fungus over the Guagua Pichincha near Quito, Ecuador, during the eruption in 2000

A volcanic eruption can release massive amounts of volcanic ash. One example of this is the island volcano Krakatau , which is located in the Sunda Strait between Java and Sumatra . When it erupted on August 27, 1883 , it delivered 18 km 3 ash particles that were hurled up to 25 km high into the earth's atmosphere and orbited the earth for three years . In many places they caused haze , twilight phenomena and discoloration of the sky. In addition, there are “thunderstorms” within the ash clouds: the ash particles are electrostatically charged by the friction , causing lightning and thunderstorm-like phenomena, in which the differences in charge are reduced.

The explosion of Tambora in 1815 had even more extreme effects. So much ash and aerosol were thrown into the atmosphere that the global climate was affected for years to come. The following year 1816 even went down in history as the year without a summer .

Similar long-lasting clouding of the earth's atmosphere occurred several times in the history of the earth due to large meteorite impacts , which also led to the mass extinction of many species.

Thanks to their mineral content, volcanic ashes have a high soil-improving value. In favorable climates , they can be used for agriculture after just a few years.

Volcanic ash sometimes contains large quantities of substances that are toxic to humans and animals. In addition, the ash particles can collect in the lungs and cause coughing, shortness of breath and scarring of the lungs. For this, however, the concentration must be considerable. When the Eyjafjallajökull erupted in Iceland in 2010 , only people in Iceland would have been affected by this danger, but they were evacuated in good time. In the rest of Europe, the concentration of the particles was too small to be dangerous.

Very fine-grained volcanic ash, which rises into the higher layers of the atmosphere during an eruption, represents a serious danger to aviation - at least in larger concentrations . For the period between 1973 and 2000, around 100 aircraft encounters with ash clouds have been documented. Damage to the aircraft occurred within a maximum radius of 3300 km (1800 mi) around the corresponding volcano. In seven of these cases, at distances of approx. 270 to 1100 km (150 to 600 mi) from the corresponding volcano, engine failures occurred during the flight, in three cases even a brief failure of all engines. However, no such event has yet resulted in a crash. The total financial damage of all events is put at a quarter of a billion dollars. P. 1

For a long time there was a lack of clarity about the real danger that volcanic ash poses to aircraft. On the one hand, ash cloud passages with an almost catastrophic outcome are known, on the other hand, there are also those without any abnormalities. The flight ban imposed over large parts of Europe in connection with the eruption of Eyjafjallajökull in 2010 was controversial . Subsequent considerations showed that the comprehensive flight ban could not be justified in this way because the ash concentrations measured in the corresponding period were well below the limit of 2 milligrams per cubic meter, which the British civil aviation authority and manufacturers regarded as critical. However, the limit was only introduced after the incident.

The following dangerous effects of volcanic ash, in particular on commercial aircraft, are listed:

Damage to the outer skin

Due to their relatively high Mohs hardness (5.5–7) and their sharp edges , ash particles act like a sandblasting blower due to the high airspeed . This is especially true for the larger particles, which, however, due to their weight, fall relatively quickly to the ground and are not carried to great heights.

When flying through air containing volcanic ash, engines can be damaged and fail temporarily or completely, depending on the type and density of the ash cloud and the duration of the flight. The following effects can occur:

The deposits in the hot section of the engine interior are particularly dangerous . Crusts on the guide plates in front of the high-pressure turbine leading to an increase of the pressure in the combustion chamber and the compressor discharge pressure, which makes it at a greater flying height at a stall in the engine (engl .: engine surge ) and thus to a flameout (engl .: FLAME- out ), which in turn means a complete engine failure. Reduced performance of the compressor due to erosion and insufficient atomization of the fuel in the combustion chamber as a result of the clogging of the swirl vanes of the fuel nozzles can also contribute to engine failure. After descending into denser air layers in gliding flight, provided the fuel nozzles are not blocked too much, the engine can usually be restarted and the flight can be continued normally. This is also possible because the passive air flow ( ram air ) in the failed, cooled engine has by then torn away a certain amount of the brittle crust from the machine parts of the “hot section”.

There is the risk that the ash, the sensors for speed and altitude clog, which can be directly dangerous as aircraft fall into uncontrollable flight conditions outside of a defined speed range, this secure area and becoming smaller with increasing height to the so-called coffin corner is .

It is assumed that under circumstances where ash ejected by volcanoes is accompanied by a lot of water, this leads to the ash particles as condensation nuclei being largely surrounded by ice at a corresponding height. During the NASA flight in 2000, this was seen as a possible explanation for why, although (subsequently discovered) very costly engine damage was recorded, there was no damage to the aircraft hull or windows. P. 17

The first serious incident was the temporary failure of an engine on a Lockheed C-130 on May 25, 1980 during a reconnaissance flight over Mount St. Helens in Washington (USA) following the eruption of Mount St. Helens on May 18, 1980 . Seven other aircraft were damaged externally and to the engines by abrasion in the weeks after the eruption.

On June 24, 1982, a Boeing 747-200 on British Airways Flight 9 over the Indian Ocean at an altitude of 37,000 ft (approx. 11,300 m) south of the Indonesian island of Java was caught in a cloud of ash from the Gunung Galunggung volcano . This led to a failure of all four engines. Only after a descent into denser layers of air at an altitude of about 4,000 meters did the crew manage to restart the engines and make an emergency landing at Jakarta / Halim Perdanakusuma airport .

On December 15, 1989, something similar happened with KLM Flight 867 over Mount Redoubt in Alaska. All four engines of the Boeing 747-400 failed for almost a full minute. The machine went into descent and only after a loss of altitude of around 3000 m could the engines be restarted outside the cloud. The plane then landed in Anchorage , Alaska, the destination airport that was planned anyway.

From the NASA a flight has been documented, a measurement plane flew 7 in which in February 2000 minutes by an ash cloud. The pilots did not register any technical abnormalities. The measuring instruments alone recorded the presence of volcanic ash during this period. The report describes that the starry sky was not visible for this period. P. 11, 19 However, later inspections discovered impairments that led to the overhaul of all four engines. The resulting damage amounted to US $ 3.2 million.

The eruption of the Eyjafjallajökull volcano on April 14, 2010 led to an extensive cessation of air traffic over Northern Europe and large parts of Central and Eastern Europe for several days from April 15, resulting in economic damage amounting to several billion euros. On April 16, 2010, for the first time in history, all civil airports in the Federal Republic of Germany were closed to flight operations according to instrument flight rules.

Monitoring of the airspace

Starting in 1993, the International Civil Aviation Organization ( ICAO ) set up nine Volcanic Ash Advisory Centers , which monitor the airspace for volcanic ash around the world and warn air traffic if necessary.

Although the volcanic ash warning centers have been active for years, binding statements have apparently never been made about the concentrations in which ash-containing air poses a specific danger to commercial aircraft. Instead, one always assumed 'the ash cloud'. This situation continued until the eruption of the Eyjafjallajökull volcano in April 2010 , which led to extensive airspace closures, which were criticized in retrospect, and complete air traffic outages for days.

On April 20, 2010, the British Civil Aviation Authority announced a binding limit value for the first time. Restrictions for British airspace only apply where a value of 2 milligrams of volcanic ash per cubic meter of air is exceeded. This value was never even remotely reached over Central Europe due to the eruption of Eyjafjallajökull.

On May 4, 2010, the EU transport ministers agreed on a 3-zone regulation. Flight bans apply to areas with more than 2 milligrams of volcanic ash per cubic meter including a safety distance of 110 km (zone 3). Stricter maintenance intervals apply between 2 and 0.2 mg / m³ (Zone 2). There are no restrictions below 0.2 mg / m³ (Zone 1).

At the moment, detectors that can detect volcanic ash from the cockpit are practically not available. The built-in weather radar cannot detect the ash particles because they are too small. P. 3