The title of this article is ambiguous. Further meanings are listed under Lava (disambiguation) . 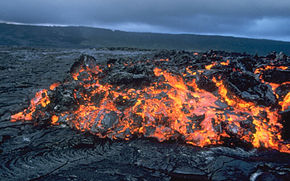 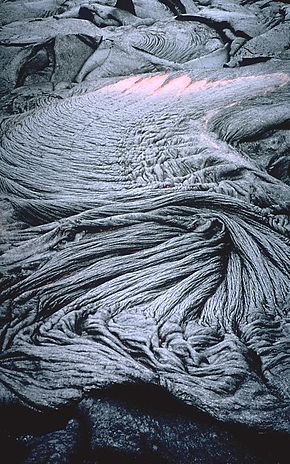 Knitted lava during the formation in Hawaii

Lava is a volcanic product and belongs to the group of volcanic rocks . Other volcanic extraction products are the pyroclastics and the gaseous and thus volatile components such as carbon dioxide , water , sulfur dioxide , ammonia and noble gases that the magma has lost through pressure relief. Magmas emerge comparatively rarely directly to the surface, as this requires considerable forces. So-called intrusions , in which magma solidifies in the earth's crust, are more common .

Lavas are usually silicate melts with a weight proportion of 45–70% SiO 2 , but there are seldom occurring lavas that contain lower proportions of silicates, such as the carbonatite lavas from Ol Doinyo Lengai . In addition to the silicates, magnesium and iron compounds can be included. A distinction is made between acidic or rhyolite lava (SiO 2 content> 65%, highly viscous ) and basic or basaltic lava (SiO 2 content <52%, low viscosity). In between are the intermediate or andesitic lavas (SiO 2 content between 52% and 65%). When the magma rises , various processes take place that influence the composition of the exiting lava ( magmatic differentiation ), so that it can deviate from that of the primary magma. Since lava cools quickly when it emerges from the surface, its structure is usually fine-grained or glassy . The escape of gases through the pressure relief during the ascent can cause smaller or larger gas bubbles to form in the lava . The temperature of lava when it emerges is between 800 ° C (rhyolithic lava) and 1200 ° C (basaltic lava). Solidified lava forms volcanic rock .

Depending on the conditions of the ascent and the cooling, lava forms different forms, which depend very decisively on the viscosity of the lava. The most popular forms are: 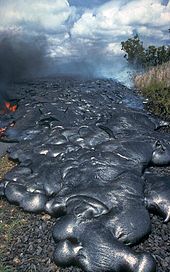 ʻAʻā-Lava [ ˈʔɑʔɑː ] - also lump lava - is a viscous basaltic lava that solidifies into sharp-edged chunks and lumps. A lava flow can consist of Pāhoehoe lava in its upper part, while ʻAʻā lava dominates in its lower part (due to the increasing viscosity through cooling and outgassing ).

Flood basalts are formed from extremely thin basaltic lava, which forms thin volcanic blankets in flat terrain . In individual cases, however, the delivery rates are also sufficient to produce mighty tablets, which in the past were also referred to as Trapp , today more as an igneous large province . Examples are the 160,000 km² Columbia River Plateau ( Oregon , Washington and Idaho ) in the USA, the Karoo basalts of South Africa , which extends over 250,000 km², or the 500,000 km² Dekkan Plateau in India ( Dekkan-Trapp ).

Pillow or pillow lava consists of clusters of round or elliptical, tubular basalt structures with a diameter of approx. 1 m or more. It arises when lava cools down very quickly in water. Pillow lavas can also be found on the mainland by uplifting rock bodies that were originally below the sea surface.

Typical of viscous andesitic and dazitic lavas is the formation of short, squat lava flows, the surface of which has broken down into compact, pore-free blocks with a wide variety of surface shapes through auto-contraction .

Bread crust bombs are made of lava, which cools down during the flight phase and takes the form of loaves of bread .

Lava lakes such as Erta Ale or Nyiragongo are a special feature .

Some lava lakes are created by filling craters with lava from above-ground lava flows; they are then called secondary lava lakes . Such lava lakes can have depths of up to 100 meters. The lava in such a lake cools down slowly (over several hundred days) and thus offers the opportunity to study the solidification processes of lava.

When low-viscosity lava flows cool down, large cavities can arise because the cooled surface has already solidified, while the liquid lava below can continue to flow away. If the ceiling of such a lava tube collapses, a lava channel is created.

If the lava is so tough when it emerges that it cannot flow away, a lava dome is created . This is a short and thick, often pancake-like lava flow. Often lava domes also fill a crater throat in a finger-like shape, which had previously been emptied by an explosive eruption.

The formation of lava domes takes a long time and is therefore a well-documented process by scientists. The lava domes on Mount St. Helens , for example, are famous , where one formed before the eruption of 1980 and has since begun to form a new lava dome. Other well-known examples are the lava domes of the Unzen and the Usu on the island of Hokkaidō in Japan, where it was probably the first time that a volcano was seen to expand and deform before an eruption. The Puy de Dôme in southern France is an example of European lava domes . 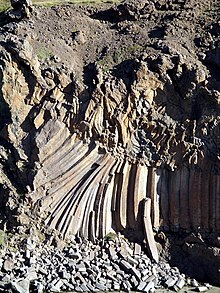 Basalt columns are formed when the lava cools under certain conditions. Lava contracts and shatters during the cooling process. However, this phenomenon is not limited to basaltic rocks, but may occur. a. also with rhyolite or phonolite (see e.g. Devils Tower ).

If v. a. When Pāhoehoe lava flows cool rapidly, the lava pillars do not become as conspicuous and are irregularly shaped. However, it can be explained by the fact that the lava fields i. A. Are very prone to erosion.

On the other hand, nicely formed basalt lava columns are formed when the cooling is slower. The pillars are always perpendicular to the cooling surface. Therefore, in lava layers and flat-lying intrusions, the pillars are vertically aligned, such as in the Lava Dome in Mendig in Germany , near Gerðuberg in Hnappadalur in Iceland , the Giant's Causeway near Bushmills in Ireland or near St. Flour in Auvergne in southern France ; however, lava columns are horizontally aligned in steep corridors.

Lava does not cool evenly, but faster on the surface and slower in the depths; therefore, the upper columns are often thinner than the lower ones.

Fan patterns and rosettes , on the other hand, are formed in lava passages and caves. Such formations can be found z. B. in Barranco de Agaete on Gran Canaria or at Hljóðaklettar in Jökulsárgljúfur National Park in Iceland.

Most of these basalt columns are hexagonal, but there are also pentagonal ones, such as at Dvergasteinn near Kirkjubæjarklaustur in southern Iceland, and heptagonal ones .