The interior of the Thurston Lava Tube in Hawaii Volcanoes National Park . On the side walls, roughly at the level of the lamps, the level of a long-term lava flow can be seen. 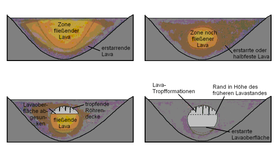 Schematic representation of the formation of a lava tube (cross section). 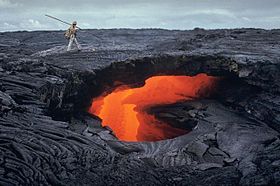 View through a so-called “skylight” into a lava tube during an eruption of Mauna Ulu ( Kilauea , Hawaii).

The essential prerequisites for the creation of lava caves are slope angles of at most 5 ° and a low viscosity of the lava, i.e. This means that the lava must be relatively thin and therefore be able to flow relatively quickly. Both conditions are found mainly on shield volcanoes , whereby the volcanic morphology is directly related to the viscosity of the extracted lava. The viscosity and also the temperature of the lava is in turn determined by its chemical composition. Low-viscosity lavas that build up shield volcanoes are always alkaline and can reach temperatures of up to 1200 ° C.

A lava tube is created when this thin liquid lava flows down the volcanic slope in a kind of channel during an eruption. Since the flow velocity and the temperature of the lava are lowest at the edges and especially on the surface of the lava flow, the lava solidifies there first. So starting from the edges of the lava channel, a kind of roof grows over the lava flow. The lava continues to flow below the “roof” as long as the volcano supplies supplies. After the eruption has ended, the lava flow subsides and the level in the tube sinks because the lava flows further down the slope due to its low viscosity. After the rest of the lava has solidified and cooled, a cavity is ultimately left behind.

The width of such a tube can be more than 30 m on earth, the height up to 15 m and the length sometimes more than 50 km. Structures on other celestial bodies, which are interpreted as lava tubes or their remains, reach even larger dimensions (see below ). On volcanic islands , lava caves can also extend below sea level. Since the roofs of the tubes are of different thicknesses, they can collapse for static reasons , possibly triggered by subsequent erosion . Occasionally, small areas of the ceiling collapse while the eruption is in progress and the lava is still flowing. The narrowly delimited openings that are created are called skylights (“skylights”). 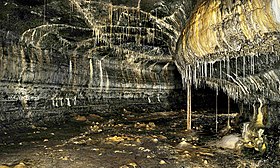 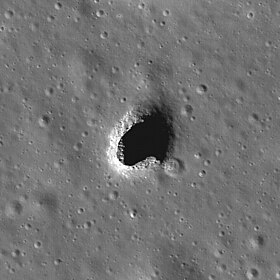 A 130 m wide hole in the surface of the moon of Mare Ingenii interpreted as a skylight (light comes from the top right). Unlike in the Marius Hills (see text), this opening is not associated with a "groove". 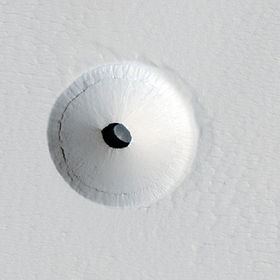 This possible candidate for a skylight of a lava tube is about 35 m wide and is located on the northern flank of Pavonis Mons , the middle of the three large shield volcanoes of the Tharsis region on Mars (light comes from the bottom left). Apparently, before the cave ceiling collapsed, a large amount of loose material had accumulated on it, which had sunk into the cave, which is now about 20 m deep at the opening.

As a rule, lava caves can only be found on active and inactive volcanoes, but geologically relatively young, where the necessary conditions (see above ) are met. That is why they are particularly numerous in Hawaii . The Thurston Lava Tube is one of the attractions of the Hawaii Volcanoes National Park and the Kazumura Cave is 65.5 km as the longest single lava tube in the world. In general, oceanic volcanic islands - but not the islands of volcanic island arches - offer favorable conditions for the formation of lava tubes. Hence they come from a. also on Réunion and the Galapagos Islands , as well as on the volcanic island Jejudo in the north of the East China Sea.

In Europe there are many lava caves, especially in Iceland , such as Surtshellir and Viðgelmir . The lava caves on Mount Etna in Sicily are considered the only ones on mainland Europe. There are also lava tubes in the Canary Islands . The longest of these tubes at 17 km, the Cueva del Viento on Tenerife , is also the longest lava tube on the territory of the European Union . In Lanzarote , the Cueva de los Verdes and the Jameos del Agua , which are sections of the lava tunnel system of the Monte Corona volcano, are open to the public. Likewise the Cueva del Llano on Fuerteventura , which can no longer be assigned to any existing volcanic structure.

There is a very extensive fossil lava tube system in Australia's Undara National Park . It belongs to the Undara volcano, which was extinct around 190,000 years ago, and is over 100 km long. 69 of the lava tubes are accessible. In 8 of these tubes (as of 2008) there are tours for tourists. 300 have collapsed. The longest accessible cave is almost 1 km long.

As early as the late 1960s, the curved shapes of the elongated depressions known as " grooves " (rimae) on the side of the moon facing the earth, which is characterized by basaltic volcanism, have been interpreted as old lava flows or at least partially collapsed lava tubes. In 2009 a discovery was finally made that seems to confirm this interpretation: In the Marius Hills in the Oceanus Procellarum Basin there is an approximately 65 m hole in one of the grooves. This so-called Marius Hills Hole is probably a counterpart to the earthly skylights and was created when part of the ceiling of the corresponding lava tube collapsed. Later, in the vicinity of the Marius Hills Hole, double radar echoes were recorded, of which the second echo could have been caused by the reflection from a cave floor. In addition, this area shows a negative gravity anomaly , which indicates a mass deficit and thus larger cavities in the subsurface. All of this suggests that there is a larger intact lava tube system in the Marius Hills. The thickness of the cave ceilings should be between a few dozen and 200 m.

Particular importance is attached to the lava tunnels on the moon with regard to the establishment of manned lunar bases, as a. Provide protection from micrometeorites , solar radiation, cosmic rays and cosmic cold.

Mars is characterized by basaltic volcanism and, with Olympus Mons, has the largest shield volcano in the solar system. Structures are also known from Mars that closely resemble the curved rims of the lunar surface and that also appear on the flanks of shield volcanoes. Finally, on the northern flank of the Arsia Mons , the southern of the three large shield volcanoes of the Tharsis region , holes have been discovered in the Martian surface, which could be skylights of lava tubes, especially since they are on a line with numerous other collapse structures, their the immediately underlying cavity, however, appears to be completely filled with loose material.

Similar to the lava tubes on the moon, those on Mars are also considered to be potential locations for permanent manned stations on the planet.