Particles of viscous liquids are more strongly bound to one another and therefore less mobile; one speaks of internal friction . It results not only from the forces of attraction between the particles of the fluid ( cohesion ). With thinner fluids, the viscosity results from an impulse flow in the fluid. The viscosity of solids is comparatively high and therefore difficult to determine. Instead of viscosity, terms such as loss factor , storage and loss module are used.

The word viscosity goes back to the typically viscous juice of the berries in the plant genus mistletoe ( Viscum ). Bird glue was obtained from such mistletoes . "Viscous" means "tough like bird glue".

The blue-green liquid on the left is of low viscosity like water, the orange on the right is highly viscous like honey.

The viscosity appears in the calculation of the viscous stress tensor . 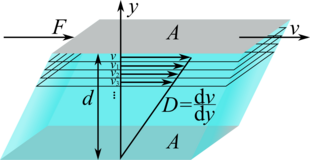 Figure 2: Definition of viscosity: The fluid (blue) is sheared between the stationary plate (below) and the moving plate (above).

Imagine two panels of the surface arranged parallel to one another at a distance . Between these plates there is a liquid that adheres to both plates. In our imagination, the space with the liquid should be divided into layers. If the upper plate is now moved with the speed , the layer in the immediate vicinity also moves with the speed due to the adhesion . Since the lower plate is at rest, its neighboring layer is also at rest. The inner layers of liquid slide past each other at different speeds. The speed increases from the stationary plate to the moving one.

This gives the equation

The constant of proportionality is the dynamic viscosity. The change in speed perpendicular to the direction of movement, i.e. the speed gradient

also referred to as or , is called deformation rate, shear rate or shear rate. With the shear stress

The following applies to the SI unit of the kinematic viscosity:

In practice, in addition to the Pa · s (pascal second), the thousandth part of the SI unit mPa · s (millipascal second) is used for media of low viscosity for the dynamic viscosity.

The Engler degree is an outdated unit of viscosity. This unit indicates the viscosity in comparison to water. 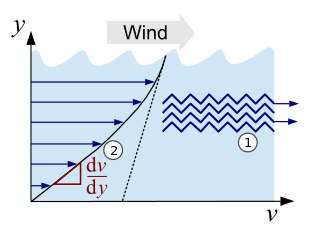 The effect of internal friction can be imagined in simplified form as the movement of two interlocked molecular layers lying on top of one another (see Fig. 1, point 1). The molecules slide past each other as they flow, and a certain amount of force is required to overcome the interlocking . The relationship between this force and the properties of the fluid in question defines the viscosity. This relationship can be recognized particularly well by the homologous series of alkanes (chain-like hydrocarbons), here the viscosity increases continuously with the chain length and thus with the increasing intermolecularly acting Van der Waals forces . In the case of the middle alkanes (from nonane , nine carbon atoms) it already has a value similar to that of water.

The viscosity can also be illustrated very well with the following example: if wind glides over the water of an ocean, this creates a movement of the water layer on the surface. The deeper you dive, the calmer the water becomes until you reach a point where there is no current. The individual layers of liquid move at different speeds , creating a speed gradient (see Fig. 1, point 2).

If the fluid layers are very thin, the velocity curve is linear, as in the above derivation. This connection was assumed by Isaac Newton as early as 1687 :

"The resistance which arises from the lack of slipperiness originating in a fluid - other things being equal - is proportional to the velocity by which the parts of the fluid are being separated from each other."

"The resistance that arises from the lack of lubricity within a liquid is - provided that all other conditions remain the same - proportional to the speed with which the liquid particles are separated from one another." 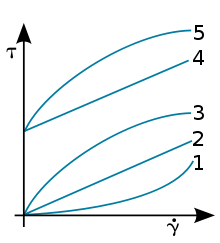 Liquids that follow this linear relationship are therefore called Newtonian fluids . Is of dependent, is called the liquid as a non-Newtonian . With Newton's law of viscosity, laminar flow and temperature and pressure independence of the fluid properties are always assumed. The linear velocity profile shown in the shear stress-shear rate diagram is established for these substances (Fig. 3, curve 2: Newtonian fluid).

In the rheological models , the Newtonian behavior is represented by the Newton element, a damping cylinder similar to a shock absorber .

However, many substances do not follow this law, but show a behavior that is dependent on time or shear rate . A distinction is made between different types of deviation:

In the general case, the shear gradient has to be calculated from the shear angle in the liquid and not from the velocity gradient. The ratio in this case is also called the apparent viscosity .

Viscoelastic materials can be described with the complex viscosity , which is based on a sinusoidal shear.

Typical non-Newtonian fluids are compound substances such as blood and ketchup . Since blood consists of both the solid substances of the hematocrit and the blood plasma , but the mixing ratio varies greatly, the viscosity also changes. With a high proportion of solid substances z. B. the performance in endurance sports is significantly increased, if too high through doping this can lead to death.

The dynamic viscosity of most liquids decreases with increasing temperature and can often be described using the Arrhenius-Andrade relationship :

The dependence of the kinematic viscosity on the temperature is described in the case of oils by the viscosity index . 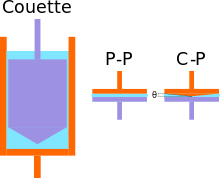 The viscosity of liquids can be measured with a viscometer z. B. measured according to EN ISO 3219. A rheometer also makes it possible to determine other rheological properties, including those of solids. With both device types, the sample to be measured is placed in the gap between two bodies (e.g. two coaxial cylinders or two parallel plates) according to the viscosity definition. One part of the arrangement rotates or oscillates at a defined speed, while the other is at rest. The shear rate results from the geometry of the measuring arrangement and the speed of the moving part. The torque required to maintain the movement is measured, from which the shear stress and thus the viscosity can be determined.

The flow cup is a quick and simple, but also very imprecise method of determining viscosity . 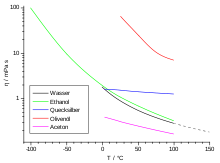 Viscosity of different liquids depending on the temperature

Viscosity of the solutions of glycerine or sucrose (cane sugar) in water, depending on the mass fraction, for the glycerine solutions even at different temperatures 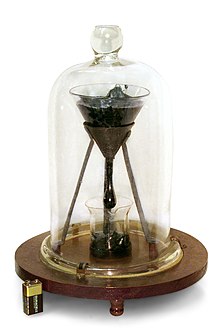 The pitch drop experiment - a long-term experiment on the viscosity of pitch that has been ongoing since 1927 ; a super tough material.

In the case of fluids with a low viscosity, the picture of internal friction “does not correspond to the physically correct ideas about molecular transport processes in fluids”. Instead, resulting here in the viscosity of a fluid momentum flux, which can be illustrated with the following image: The current paths in the flow are carried trains symbolizes that travel at different speeds in parallel side by side and are loaded with sandbags. The sandbags correspond to the fluid elements in the stream filament. People on the trains throw the sandbags at the other train, which equates to the accidental thermal movement of the fluid elements between the stream filaments. If a sack of the slower train lands on the faster one, the sandbag picks up the impulse that the faster train sends to it and thus slows down itself. Conversely, if a bag from the faster train lands on the slower train, the train takes up the impulse of the sandbag and thus becomes faster itself. This exchange of momentum slows down the faster train and accelerates the slower one.

Viscosity therefore represents a flow of momentum from a faster flowing stream to a slower one. In a continuum flow, the fluid elements exchange impulses via the voltages acting between them . Shear stresses occur between the streams flowing next to each other at different speeds , which macroscopically make themselves felt as viscosity. 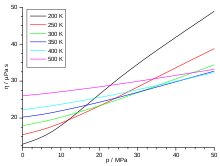 Viscosity of nitrogen as a function of pressure for different temperatures 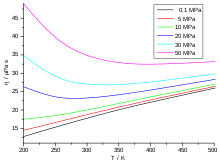 Viscosity of nitrogen as a function of temperature for different pressures

For gases, the viscosity can be estimated using a microscopic observation of the momentum flow:

The viscosity of gases is independent of the pressure at low pressures (≈ 0.1 to 10 bar) . This applies as long as the free path is small compared to the dimensions of the vessel and large compared to the dimensions of the molecule. In other words: for a very thin or a very dense gas, the viscosity is again dependent on the pressure or the density of the gas.

The viscosity is basically dependent on the temperature. The viscosity increases with increasing temperature, since the mean particle speed increases proportionally (see below). This behavior is exactly the opposite for most liquids. The following table lists the viscosities and free path lengths for some gases.

According to Hirschfelder, the viscosity of pure gases can be calculated with the help of the kinetic gas theory in a large temperature range (approximately from 200 to 3000 Kelvin).

Physics of the friction tensor

The viscosity is based on the experiment according to which a force is required to maintain a shear flow. This force causes an exchange of momentum within the flow or with the edge, which is why it belongs to the category of surface forces. Continuum flows exchange momentum via mechanical stresses , with an increase in stress causing acceleration. In the continuum, the accelerating force can be formulated in the most general form as the divergence of a tensor :

From the experiment it follows immediately that the friction tensor is a function of the spatial change in the flow velocity:

Causes tension. The superscript T forms the transposition . With the further assumption of an isotropic liquid , the immediate material properties are described by scalar quantities. With this the friction tensor becomes:

It contains the Kronecker delta , the bulk viscosity , the first Lamé constant , the trace operator and is the unit tensor . The first term describes the viscosity through true-volume deformation (the tensor in the square brackets is non-marking or deviating ). The second term represents the viscosity through volume change. This term will disappear in the case of incompressibility , because then it is .