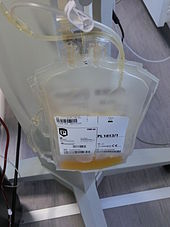 Blood plasma ( ancient Greek πλάσμα plásma 'structure') or plasma for short , is the liquid and cell-free portion of the blood that is obtained when a blood sample that has been rendered incoagulable is centrifuged . As a result of the centrifugation, this liquid no longer contains any blood cells ( erythrocytes , thrombocytes and leukocytes ). In contrast to blood serum , blood plasma still contains all the coagulation factors and is the starting material for plasma fractionation . Blood plasma accounts for around 50–59% in men and 54–73% in women of the blood volume.

Does all information relate to the individual references given as footnotes?

Blood plasma serves as a transport medium for glucose , lipids , hormones , metabolic products, carbon dioxide and oxygen . The oxygen transport capacity is, however, significantly below that of hemoglobin in the red blood cells ; it can increase under hyperbaric (increased pressure) conditions. It is also the storage and transport medium for coagulation factors and its protein content is necessary to maintain the colloid osmotic pressure of the blood.

Blood plasma accounts for around five percent of body weight, which corresponds to a volume of around 3.5 liters for a person weighing 70 kg. The density is 1028 g / l.

Blood plasma can be obtained by centrifuging blood that has been previously mixed with an anticoagulant (see Coagulation ) , such as sodium citrate . The plasma obtained in this way is usually yellowish-clear and is used for plasma donation (referred to here as fresh frozen plasma ). However, if the plasma obtained is milky-white, it is referred to as " lipemic " (fatty) and is not released for transfusion . This may be due to a problem with the donor's lipid metabolism or simply an immediately preceding high-fat meal. If the plasma obtained is reddish to red in color, it is described as "hemolytic": red blood cells have burst and hemolysis has occurred.

Blood plasma consists of 90 to 91% by weight of water , the remainder being dissolved substances. These include blood proteins , inorganic electrolytes , glucose and urea .