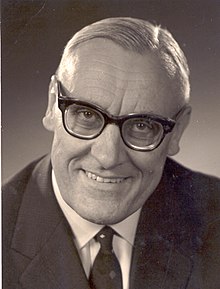 After attending the Maxgymnasium in Munich and graduating from high school in 1917, he was drafted into the military. At the beginning of May 1919 he took part in the suppression of the Munich Soviet Republic as a volunteer with the Epp Freikorps . In 1919 he began to study medicine in Munich, which he completed after passing the state examination in 1925 with a doctorate and medical license . After a brief period as an assistant in Munich at Ernst von Romberg's clinic , he began working at the Jena Medical University Clinic in 1926 , where he was granted a teaching license in 1927 and was appointed private lecturer in 1928.

Heilmeyer was a member of the Stahlhelm from 1933 to 1935 , according to his own statement, in order to offer resistance against the NS in this context. This was probably not uncommon among the Jena professors in 1933, although the background was usually nationalistic. He took part in training courses on racial politics at the State School for Leadership and Politics in Thuringia. In 1936 Ludwig Heilmeyer was appointed associate professor.

In 1941 Heilmeyer was called up as an air force doctor. He was initially employed in the air force hospital in Halle-Dölau , from 1943 in Rowno ( Ukraine ) and finally in 1944 as head of the internal department of the former university clinics in Krakow . In addition, he had been a consultant internist at Luftflotte 4 since 1944 .

After temporary work at the Medical Academy in Düsseldorf , where he was appointed full professor in 1945, and Wuppertal - Barmen , he took over the chair for internal medicine at the University Medical Center Freiburg i. Br. , Which he held until 1967, and became director of the University Medical Center. Heilmeyer began his work with two senior physicians and a few assistants. He made a decisive contribution to the reconstruction of the clinic that was destroyed in the war.

Heilmeyer's role as a member of an expert commission on Wilhelm Beiglböck set up by the German Society for Internal Medicine is questionable . Beiglböck was sentenced to 15 years imprisonment in the Nuremberg Doctors Trial in 1946/47 (later reduced to ten years) because he conducted human experiments on " Gypsies " to make seawater drinkable in the Dachau concentration camp in 1944 . In December 1951 he was released early. The expert commission had come to the conclusion that “ mistakes had been made in the type of selection and recruitment of test subjects and in the choice of a concentration camp as the test site, but that these mistakes were not crimes. “After his release from prison in 1951, Beiglböck initially worked for Heilmeyer in Freiburg and in 1952, on his mediation, became the head doctor of the internal department of the hospital in Buxtehude .

In 1967, after his retirement in Freiburg , he moved to the Medical and Natural Sciences University of Ulm as founding rector and chairman of the founding committee .

Heilmeyer died in Italy in 1969 of a tension pneumothorax .

From the winter semester of 1946/1947, Heilmeyer introduced psychosomatics into the classroom and into everyday life in the medical clinic and promoted psychotherapeutic treatment methods, an unusual innovation for the time.

Ludwig Heilmeyer founded the quantitative-chemical hematology . In addition to iron deficiency anemia , one of his main areas of work was leukemia , for which he introduced chemotherapeutic treatment with cytostatics . He also dealt scientifically with high-voltage electrophoresis as well as iron and copper metabolism and is the first person to describe chronic erythroblastosis , which is known as "Heilmeyer-Schönersche disease".

In the tuberculosis therapy Heilmeyer sat with the use of antituberculosis important impetus.

In 1949 he was one of the first to use radio isotopes with the associated diagnostics and therapy in clinical research. He later created a nuclear medicine department within the medical clinic. In 1963 he founded the Society for Nuclear Medicine in Freiburg and became its first chairman.

He dedicated the textbook on internal medicine published by Heilmeyer (from 1955) to his friend, the surgeon Hermann Krauss , on his 60th birthday.

In 2016 the “Commission for the Review of Freiburg Street Names” came to the conclusion that Heilmeyer was appropriating third-party services from Jewish scientists who had been expelled from the office, in particular when Heilmeyer re-published the “Handbook for Hematology” with Anton Hittmair from 1959 to 1969. Heilmeyer took the place of first editor , the Jewish doctor Hans Hirschfeld (editor from 1934). Heilmeyer and Hittmair did not refer to Hirschfeld's achievements in the foreword or elsewhere, nor did they think of his murder in the Theresienstadt concentration camp.

The following parts of this section seem to be out of date as of February 22, 2020 : A ward of the Center for Internal Medicine of the University Medical Center Göttingen bears Heilmeyer's name
Please help to research and insert the missing information .

Ludwig Heilmeyer had honorary doctorates from the universities of Athens , Frankfurt am Main , Leuven , Santiago de Chile and Vienna . In 1960 he received the Robert Koch Prize and the Robert Koch Medal . He was a bearer of the Great Federal Cross of Merit . The Society for Advances in Internal Medicine (today Walter Siegenthaler Society for Advances in Internal Medicine and formerly known as the Ludwig Heilmeyer Society) awarded every two years for fundamental scientific work on current topics in internal medicine to deserving researchers the " Ludwig Heilmeyer Prize ”or medal (today named after Walter Siegenthaler like the company).

In Freiburg, the two internal intensive care units of the Medical University Clinic were named after Ludwig Heilmeyer.

Heilmeyer's name also bears a station at the Center for Internal Medicine at Göttingen University Medical Center , where his student Werner Creutzfeldt worked .

The city of Ulm honored Heilmeyer with the “Heilmeyersteige” street in the Eselsberg district , on which the city's largest student residence is located. In September 2018, the city council of Ulm decided to rename the previous Heilmeyer-Saal in the Grünes Hof Ulm due to Heilmeyer's Nazi past. In July 2019, the Ulm municipal council also decided by a majority to rename the Heilmeyersteige. In February 2020 the new name "Eselsbergsteige" was decided; the renaming is to take place with the timetable change in December 2020.

In Günzburg, Ludwig-Heilmeyer-Strasse is named after him, where the BKH Günzburg, Clinic for Psychiatry and Psychotherapy II at Ulm University is located. However, on February 18, 2019, the Günzburg city council decided that the street should get a new name: Heilmeyer's services to Günzburg and the Reisensburg are undisputed. With his involvement in the Nazi era and his support for former concentration camp doctors, Ludwig Heilmeyer no longer serves as a role model by today's standards.

The "Ludwig-Heilmeyer-Weg" in the Freiburg district of Rieselfeld, which has existed since 1994, was renamed to "George-de-Hevesy-Weg" in 2018 following the recommendation of a commission of experts to review the Freiburg street names . The commission named Heilmeyer's Nazi burden as a reason.