The medieval university was in various buildings in Stubenviertel of Vienna's city center housed. Her first house was the Herzogskolleg, opened in 1385, at today's Postgasse 7-9. After the incorporation of the Jesuit College in the University in 1623, the early Baroque Jesuit college was built at the same place, which, together with the University Church and some additions today as Old University is preserved and for example, the archive of the University of Vienna contains. In 1753/55 Maria Theresa had a new main building, the New Aula , built right next to the Jesuit College . The auditorium was a central meeting place during the revolution of 1848 . After the violent suppression of the revolt, the university was occupied by the military and the students were expelled; the building was given to the Academy of Sciences in 1857 . The studies took place in temporary alternative quarters.

→ Main article : Main building of the University of Vienna

Main building of the University of Vienna

From 1854, a space was initially provided behind the choir of the Votive Church for the construction of a main building for the university . In 1868, however, an area on the Ringstrasse became available and the university was built there. Construction began in 1877. Architect Heinrich Ferstel chose the style of the Italian High Renaissance for the building , with the universities of Padua and Genoa as inspiration. The eye-catcher on the Ringstraße is the prominently protruding columned hall. In the gable, a relief depicts the birth of Minerva , the goddess of wisdom. In 1884 the university was completed. The area of ​​the university covers 21,412 m², of which 14,530 m² are built-up. The cost was 7.7 million guilders (approx. 68 million euros).

Today, this main building at Universitätsring 1 houses the rector's office, most of the dean's offices, the central service facilities, the main library, a few institutes with their specialist libraries and numerous lecture halls.

Important secondary locations of the university are the new institute building  (NIG) built in 1962 and the university campus , opened in 1998 , which was created through the renovation of the old general hospital and houses a large number of institutes and specialist libraries. The University Center Althanstrasse (UZA 1-4), built in several parts from 1978–1995, is located above the former freight yard of the Franz-Josefs-Bahnhof in Althangrund (9th district of Vienna). The Juridicum in the 1st district, Schottenbastei 10-16, completed in 1984 , is one of the most important postmodern buildings in Vienna. The other scientific facilities of the institutes are spread over 60 locations in Vienna and other federal states. 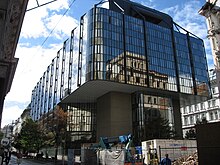 Law Faculty of the University of Vienna

The University of Vienna has 15 faculties and five centers: 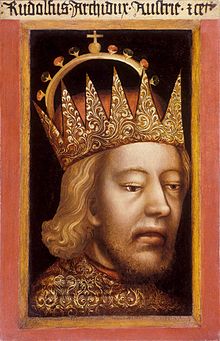 The founding deed, now kept in the archive , was signed on March 12, 1365 by Duke Rudolf IV and his brothers Albrecht III. and Leopold III. signed. Hence the name of the university Alma Mater Rudolphina . The charter of founding contains in a programmatic way the guiding principle of the university that “common good, right courts, human reason and humility receive and grow [...] and at the same time a possibly wise person who is sensible and ain unwise to human reason in right understanding with divine learning and will be withdrawn. "

After Charles University in Prague, the University of Vienna is the second oldest university in the then Holy Roman Empire north of the Alps and the oldest existing university in the German-speaking area. However, almost twenty years would pass before regular teaching and learning operations began; 1383 used Duke Albrecht III. a dispute at the Sorbonne to call numerous professors from Paris to Vienna, and after the papal reservation, still expressed in 1365, to set up a theological faculty, Albrecht III issued. In 1384 a second letter from which the continuous development began.

Up until the end of the Middle Ages, the university grew steadily and had over 6,000 students during the humanist era (around 1500), making it the largest university in the empire. In the 1520s, the plague epidemics, the threat from the Turkish army and the Reformation led to a sharp decline in student numbers; in the 16th century the university temporarily had only 30 students. On October 13, 1623, the university was merged with the Jesuit College , founded in 1551 , and the entire theological and philosophical faculty was handed over to the Jesuits (the Society of Jesus ). After this reform, the university took off again.

Far-reaching reforms were then carried out under Maria Theresa and Joseph II from 1749, with which the influence of the Jesuits was pushed back and finally eliminated and the university was converted into a state institution, which was associated with an almost complete loss of university autonomy. Little emphasis was placed on research and teaching was tightly organized.

The 1848 revolution was directed not least against these restrictions on freedom of teaching and learning, which then became the principles of the university reform of Education Minister Leo Thun-Hohenstein in 1849 . In this context, the Faculty of Philosophy was upgraded and put on an equal footing with the three “higher” faculties (theology, law, medicine).

The Evangelical Theological Faculty was founded in 1850 , but was not incorporated into the university until 1922. With the university reform in 1975, the university was reorganized into eight faculties: Catholic theology, Protestant theology, law, social and economic sciences, medicine, basic and integrative sciences, humanities, and formal and natural sciences.

In 1897 women were admitted as full listeners for the first time, albeit initially only in the philosophical faculty . The remaining faculties followed, some at a considerable distance: the medical one in 1900, the legal one in 1919, and the evangelical theological one in 1923. In 1945 the Catholic theological faculty finally admitted women as regular students. Eight years after starting women's studies at the University of Vienna, the Romance philologist Elise Richter was the first woman to complete her habilitation in 1905; she also became the first associate professor in 1921. The first Ordinaria was only appointed at the University of Vienna in 1956: the physicist Berta Karlik .

Long before the “Anschluss” of 1938, anti-democratic and anti-Semitic students, benevolently tolerated by some professors, were active at the university. The Institute for the Care of German Knowledge was founded in 1924, in 1928 there were university riots, in 1932 there were also student riots that were combined with demonstrations in front of the main entrance to the university. In June 1936 the physicist and philosopher Moritz Schlick , founder of the Vienna Circle , was shot dead by one of his former students on the Philosophenstiege in the main building of the university; the murderer was released from prison two years later by the Nazi regime.

After Austria's annexation to the German Reich, the university was “brought into line” under Rector Fritz Knoll in 1938 according to National Socialist criteria and a large number of teachers and students were expelled for racist and political reasons, with a third of the teaching staff the largest such measure worldwide. In 1943 he was followed by the anatomist Eduard Pernkopf .

Occupation of the Audimax

In April 1945 Kurt Schubert , then only 22 years old and later recognized doyen for Jewish studies at the University of Vienna, obtained permission from the Soviet occupying forces to resume university operations, which is why he is the unofficial first "rector" of the university after the war. On April 25, 1945, however, the constitutional lawyer Ludwig Adamovich senior was elected full rector of the University of Vienna.

On October 22, 2009, after a solidarity rally for the squatters of the Academy of Fine Arts, the Audimax, the largest auditorium in Austria (opened in 1936), was occupied (see Student Protests in Austria 2009 ). The protests were directed against (among other things) the implementation of the Bologna Process in Austria, against the reintroduction of tuition fees, against access restrictions and against precarious working conditions at universities. Demand was raised to increase the university budget to 2% of GDP in order to expand human and spatial capacities as well as to better equip universities and an education and curriculum that was independent of private-sector interests.

In 2015, the Vienna Philharmonic dedicated part of the program of their New Year's Concert to the University of Vienna on the occasion of the 650th anniversary on March 12, 2015. 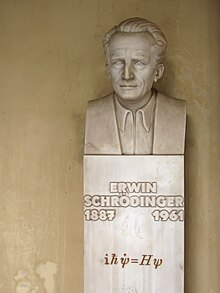 Erwin Schrödinger monument in the courtyard of the university

The university on the reverse of the 1000 Schilling banknote (1983)
See also : Category: Person (University of Vienna)

→ Main article : List of rectors of the University of Vienna

→ Main article : Faculty honor boards of the University of Vienna

Monuments in the arcade courtyard