The institute building "Freihaus"
(moved into in the 1980s)

University library of the Technical University of Vienna
(opened in 1987)

The Technical University of Vienna (TU Wien) is Austria's largest scientific and technical research and educational institution and, together with TU Graz and MU Leoben, forms the Austrian Universities of Technology (TU Austria) association with more than 42,000 students, 460 million euros in total assets and 8,800 Employees.

From the mid-1970s, the institute building "Freihaus" was built on the former Freihaus grounds (Wiedner Hauptstrasse 8-10) according to plans by the architects Alexander Marchart and Roland Moebius . The topping-out took place in 1979, but the reference was postponed because “post-planning” and official requirements caused extensive changes. Subsequently, the library building of the Vienna University of Technology (Wiedner Hauptstrasse 6) , located immediately to the north, was built according to plans by the architects Justus Dahinden , Reinhard Gieselmann , Alexander Marchart and Roland Moebius and opened in 1987.

With the entry into force of the Universities Act 2002 (UG 2002), the Vienna University of Technology acquired full legal capacity. Since then, it has been headed by a rector and four vice-rectors together with the newly created university council. The university's statutes and the nomination for the rector are drawn up by the senate.

The Vienna University of Technology is divided into eight faculties and numerous service facilities.

The range of courses comprises 53 courses (18 Bachelor, 31 Master, one teaching and three doctoral programs). Since the winter semester of 2006, all courses, with the exception of the remaining teacher training course, have been offered in the Bachelor-Master system in accordance with the Bologna architecture that is valid throughout Europe . In April 2012 it was decided to cancel four of the five teacher training courses offered from the 2012/13 winter semester.

In addition, the Vienna University of Technology offers a number of advanced training courses:

At the Vienna University of Technology there are currently admission restrictions for computer science studies. With the 2013/14 winter semester , there should have been access regulations in the fields of architecture and spatial planning as well as computer science at the request of the then Federal Ministry of Science and Research (BMWF). However, the minimum number of places to be offered by the ministry was too high and not aligned with real capacities. The rectorate had therefore decided not to conduct any admission procedures. The decision meant that the Vienna University of Technology continued to grant unrestricted access to all courses, but did not have unrestricted places. In 2016, admission procedures for computer science courses were introduced and the number of study places was limited to 581 per academic year. 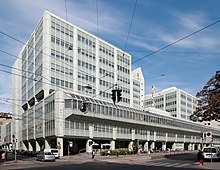 Most of the Vienna University of Technology buildings are located in the city center of Vienna on Karlsplatz , in the 4th district of Vienna , in the vicinity of many important cultural monuments ( Karlskirche , Wien Museum , Musikverein , Künstlerhaus , Secession ).

At the beginning of 2006, a change of location of the Vienna University of Technology within Vienna to Aspern and an associated new building as a closed campus university was discussed. In June, however, after a detailed debate with the staff and the students, the rectorate decided to consolidate the existing location in Vienna's 4th district instead of relocating.

The four major locations are:

In 2010, the TU Vienna, together with the Technical University of Graz and the Montan University Leoben, founded the association "TU Austria". This cooperation represents 43,000 students, a total of 440 million euros and 8,600 employees.

Awards given by the Vienna University of Technology