from Wikipedia, the free encyclopedia
This is the spotted version , flagged on April 1st, 2020 . There is 1 pending change that has yet to be viewed.

Art Academy is a redirect to this article. Further meanings are listed under Art Academy (disambiguation) .

An art college or art academy or academy of the arts , partly an art university , is an artistic or artistic-scientific university where artist-professors and scientists from different disciplines teach and aspiring artists (in the broadest sense: visual artists, musicians, architects, directors, Actors, designers etc.) as well as art educators and art scholars.

In addition to colleges for the fine arts or fine arts , the term music colleges , colleges for drama , film schools and universities of special arts such as media or dance . Architecture and Applied Arts ( arts and crafts , such as design / design ) is taught both in art schools as at technical colleges / universities, literary and linguistic art forms ( literature , rhetoric ) and on normal liberal arts colleges.

Study of nudes in an academy around 1720, drawing by Giovanni Battista Tiepolo 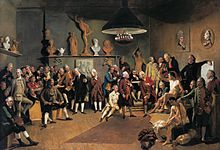 Portraits of the academics in the Royal Academy , painting by Johann Zoffany , 1771/72
→ Main article : “History” in the art school article

The beginnings of the art academies lie in Italy. It was here in 1563 that the Accademia delle Arti del Disegno in Florence, or Accademia for short, was the first academy for painting in Europe. It was under the patronage of the Duke of Tuscany, Cosimo I de 'Medici. The academy's training model as a princely art school was copied across Europe. The popes established the Accademia di San Luca in Rome in 1593 , and the French king followed suit in 1648 with the Académie royale de peinture et de sculpture , whose successor institution, the Académie des Beaux-Arts , still exists today.

The first art college or art academy in the empire was founded in 1662 by the engraver and publisher Jacob von Sandrart in Nuremberg with the painter academy (today's Academy of Fine Arts Nuremberg ) . In the academies founded later in the 17th and 18th centuries by princely sovereigns, artists were supposed to train the students as professors so that the success of the schools contributed to the fame of their country. In most of the European royal cities, art academies were established under the patronage of the rulers, for example in Berlin in 1696 (now Europe's largest art academy ), in Vienna in 1725 , in Stockholm in 1735 and in London in 1768 . There were also important German academies at the princely seats in Dresden , Mannheim, Düsseldorf and Munich . In contrast to these academies, the Augsburger Kunstakademie, established in 1710, was founded by the city, but received an imperial privilege in 1755 and achieved a great reputation through its art publications. From the end of the 18th century onwards, the school-based training and the rigid, classicistic set of rules of the academies triggered counter-movements that set artistic freedom against teaching. Artist groups like the Nazarenes broke away from the official art doctrine and looked for new ways. Throughout the 19th century there was a contrast between the established painting, as taught at the art academies, and the great individualists and innovators. In France, for example, Delacroix , Courbet and the Impressionists stand for art development outside the state academies. However, private art schools also called themselves academies at that time (for example the Académie Julian ). There mainly those who did not meet the admission requirements of the state École des Beaux-Arts , including women as artists, learned . With the liberalization of teaching in the 20th century, the art academies have largely given up their role as guardians of a traditional conception of art.

In Anglo-American countries, art colleges are usually integrated into regular university operations as faculties; in Denmark , France or Italy , art colleges exist parallel to higher education as independent institutions that are subordinate to the ministries of culture, not the ministries of science. They do not award academic degrees , but their own diplomas. The former special status of art academies in relation to universities had been taken over in some non-European countries. Many art colleges today offer accompanying studies, and universities create courses that correspond to studying at an art college. In Bangkok , Thailand , for example, there is art studies at Chulalongkorn University, which was formerly organized according to traditional faculties, as well as at an art college that has been expanded into a university, Silpakorn University .

In Germany, the art colleges are generally on an equal footing with the universities ; many of them have the right to award doctorates in the artistic and scientific field. Art universities within the scope of the University Framework Act serve the further development of art and science through teaching and research, especially in the realization of artistic development projects .

Art colleges train young artists and scientists. The condition for admission is a special artistic aptitude, which can be proven by submitting work samples and determined in an entrance examination. The pedagogical basis usually includes the assumption that students have to find their own creative work and artistic identity because art cannot be taught, but artistic techniques, methods and research strategies can.

The departments are either separate or interdisciplinary linked to one another, depending on the subject-specific requirements of the teaching . In certain departments, the study place can be linked to individual tuition, to a small group or to a certain class of a professor, in others the students are free to combine the courses offered for their own artistic work and to organize their studies.

In addition to the courses for freelance artists, there are also degrees at colleges for fine arts that should enable them to work in media , design , fashion design and stage design . Some also offer courses for restorers and art educators.

Studying at art colleges in Germany leads to different degrees. In addition to the usual diploma degrees in a personal (e.g. Dipl.-Mus.-Päd. - Diplom-Musikpädagoge ) or often impersonal (e.g. Dipl. Vis. Komm. - Diploma for visual communication ) form or Bachelor - and master's degrees and doctorates , depending on the content, there are degrees such as graduate artist , academy letter , master class student , stage maturity or concert maturity .

The first art college was founded in 1692 as a private academy of the court chamber painter Peter Strudel (re-established in 1725 as the kk court academy of painters, sculptors and architecture , today's academy of fine arts). The first music academy is based on the foundation of the Wiener Musikverein in 1819 and became state-owned in 1909 (kk Academy for Music and Performing Arts) .

See also : List of music colleges and conservatories in Austria

In a broader sense, the private university of the creative industries for applied arts (industrial, graphic and interior design), founded in 2004, is an artistic university.

In Switzerland , the art colleges are assigned to the respective technical colleges.

The École nationale supérieure des beaux-arts de Paris has the status of a grande école . In France, parallel to the traditional art academy, the École des Beaux-Arts , faculties for arts plastiques (visual arts) were created at universities as a result of the 1968 movement . The concept of arts plastiques related to the anthropologically and sociologically expanded concept of art and was deliberately directed against the traditional concept of fine arts .