The École nationale supérieure des Beaux-Arts (short ENSBA Paris ; German  State Academy of Fine Arts Paris , to 1968 Ecole des Beaux-Arts ) is an under the auspices of the French culture minister standing, the Grandes écoles delivered rechnetes state Établissement public in Paris . This most traditional and most famous of the French universities of fine arts is located in the central quarter of Saint-Germain-des-Prés .

It was founded on April 20, 1797 as École spéciale de peinture, de sculpture et d'architecture, officially confirmed by royal decree in 1819 as École royale et spéciale des beaux-arts and - after changing its name several times - in 1968 under its current name The name has been raised to the rank of an art college , but traces its actual origin to the oldest of its predecessor institutions: the École Royale de Peinture et de Sculpture, founded by the Académie royale de peinture et de sculpture , founded in 1648 .

In addition to imparting subject-specific knowledge, ENSBA Paris offers several hundred students a wide range of artistically oriented practical and theoretical subjects. The Écoles nationales supérieures d'architecture , which is now responsible for this area, emerged from the architecture department, which has been separate from the ENSBA since 1968 .

The facilities, which extend over an area of ​​about two hectares, occupy the site of the former Augustinian monastery Couvent des Grands-Augustins , whose chapel has been preserved. They are accessible through the main entrance on rue Bonaparte . The advantageous location in the city center on the Rive Gauche of the Seine on the northern edge of the Saint-Germain-des-Prés district means that the Louvre , which is located in the immediate vicinity and rises across the river, can be reached in a few minutes on foot. 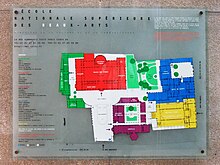 Building plan of the ENSBA

The ENSBA consists of a variety of buildings, most of which were constructed between the 17th and 19th centuries, with a few others in the 20th century.

The oldest building is the Chapel of the Petits-Augustins , which dates from the 17th century. One of the first art collections in Paris was created here by Queen Margot and later Katharina von Médici . During the French Revolution , art treasures were stored in the chapel to protect them from destruction, for example the tombs of the French kings from the cathedral of Saint-Denis . In 1795 Alexandre Lenoir opened the Musée des Monuments français, France's first public museum. It contained some of the most important sculptures in the country. After the museum closed in 1816, this place was assigned to the art college. Countless parts of the collection can still be seen there today, such as a number of copies of the most famous sculptures.

Other buildings of the art college are the Bâtiment des Loges , where the entrance exams take place, the Palais des Études , the main building designed by Félix Duban based on Florentine city palaces and the Hôtel de Chimay , a neighboring city palace that was later added to the campus.

The École nationale supérieure des beaux-arts was originally a monastery: the Couvent des Petits-Augustins. In the old enclosure, the archaeologist Alexandre Lenoir planted a Chinese mulberry tree, which gave this courtyard its name. In 1836 the French architect Félix Duban converted the enclosure into an ancient atrium surrounded by arcades . During the Second Empire , Duban had the walls painted and made copies of ancient sculptures.

Organization of the university

The École nationale supérieure de beaux-arts de Paris is divided into ateliers in which between 10 and 20 students from different semesters work. Most other French art schools are more like schools with different subjects and timetables. At the end of each year, the Friends of the Fine Arts Prize is awarded (Le Prix des Amis des Beaux-Arts). The Friends of the Art School are an association of gallery owners and art collectors .

After three years, after successfully passing the exam, the Diplôme national d'art plastique , DNAP for short (roughly “National Diploma for Fine Arts”) is awarded. The latter corresponds to a Bachelor of Arts .

In the fourth year either an internship (in an art gallery , a museum , with an established artist etc.) or a semester abroad has to be completed. The ENSBA maintains partnerships with art schools and academies from all over the world, for example the famous Hunter College or Cooper Union in New York , CalArts in Los Angeles , the Musashino Art University in Tokyo , or the Instituto Superior de Arte , Havana .

At the end of the fifth year, the major diploma examinations take place to obtain the Diplôme national supérieur d'art plastique , or DNSAP for short, which corresponds to a Master of Arts degree.

The media library in the Palais des études is a documentation center for contemporary art . It was founded in 1989 and since then has continuously increased its stock of books, exhibition catalogs , artist monographs, French and foreign art magazines, audiovisual documents, and documentation of the students' work. As a rule, access is reserved for students and professors and alumni of the art college. Art scholars , critics and artists can, under certain conditions, have access to the media library.