The École polytechnique ( French often short l'X , X ' called) is one of the most prestigious and selective two typical French as écoles Grande designated elite universities. The Ecole Polytechnique has an engineering degree polytechnicien and two-year master's programs at and doctoral studies. She was a founding member of the University of Paris-Saclay , but has been part of the Institut Polytechnique de Paris since summer 2019 .

The college was founded by Gaspard Monge in 1794 during the French Revolution and was declared a military academy by Napoleon I in 1804 . It is still subordinate to the Ministry of Defense today. The duration of study for the Polytechnic is now four years (total duration of study 6 years), with the last year being spent as an application study in another university (in France or abroad). The degree is called Ingénieur de l'École polytechnique . Among the graduates are many personalities from business, politics and science, for example three Nobel Prize winners , a Fields Medal winner, as well as three French presidents and four marshals of France .

It was founded on March 1, 1794 as the École centrale des travaux publics in Paris and was intended to remedy the shortage of engineers and natural scientists . The foundation resulted from the fact that France by Prussia and Austria after the execution of King Louis XVI. (21 January 1793), the war had been declared and that at the same time many of the previously existing professionals under the dictatorship of Robespierre (1793/94) emigrated as enemies of the regime were imprisoned or even beheaded.

In 1795 it was renamed École polytechnique . Under Emperor Napoleon Bonaparte , it was rededicated in 1805 as a training center for technical army officers , particularly in the artillery and pioneering sectors , and placed under the Minister of War.

Today, the École polytechnique sees itself as a technical and scientific-oriented university, which at the same time provides a broad general education and tries to shape personalities who can function as leaders in civil service and business. Only a small minority of the graduates become career officers. 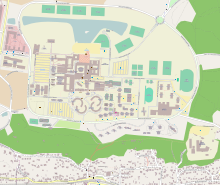 General plan of the campus of the École polytechnique

Students of the École polytechnique in their parade uniform

Candidates for the nearly 500 study and boarding places that are awarded annually to a female competition (must concours ) undergo. As a rule, in order to have a chance at all, they have previously completed two years of preparatory classes ( classes préparatoires ), which are offered at selected high schools for graduates who have already been selected. On concours foreigners can participate. Some of them (who mostly come from former French colonies or protectorates and have attended preparatory classes either there or in France) take part in the concours like the French, the others have been selected in their universities around the world and compete in an international concours for the few Places. Women have also been admitted since 1972 .

The students of the École polytechnique (like those of the other grandes écoles ) are not referred to as students ( étudiants ), but as pupils ( élèves ) . This comes from the designation of the university as école (school) and not as a university .

Those applicants who went empty-handed at the concours , d. H. the majority either find a job at other elite universities (because one usually applies to several at the same time) or they switch to a university. As a rule, the two-year preparatory class is fully credited to the relevant course and they are by no means considered a failure, but rather the best “student material”.

The first year of study at the École polytechnique includes, in line with the university's military tradition, ten months of basic military service or an alternative service that ends with promotion to reserve officer . And throughout its construction, the (French) are Polytechniciens as the military, get a pay and wear on formal occasions uniform . The foreigners are also allowed to wear the uniform, but they are not military (but they usually get a scholarship). The college is subordinate to the Ministry of Defense and the rector is a general .

Since the curriculum is more general than subject-specific (a lot of mathematics and physics, but also at least two foreign languages, history, style and presentation techniques as well as sport), the fourth and final year of study consists of a technical or scientific special training at a relevant institution in Germany or abroad .

The places at the École polytechnique are extremely sought-after, which is why a multiple of the number of those subsequently admitted to the concours is registered. The requirements in the examination procedure, which also refers to the applicants' ability to act skillfully and confidently, are correspondingly high. The requirements in the course itself are also high, but those who are accepted will almost always go through it without any problems. Dropping out of studies is extremely rare and usually caused by disciplinary problems. In order to be accepted into the grands corps de l'État (highest post in the civil service), a very good place on the ranking list of graduates is necessary. The higher someone ranks in this ranking, the greater their options in terms of the items available. But even the less well placed do not experience any difficulties in finding accommodation.

The students are classified according to their doctorate (year of entry into the Ecole Polytechnique), so X1965 means start of studies in 1965.

The teaching staff ranks well above that of the universities in terms of status and prestige. As at all grandes écoles , part of the teaching is given part-time by executives in the state and business who create a closer practical relevance to the course.

Portal of the former École polytechnique in the Latin Quarter

There are ten faculties:

The École Polytechnique cooperates with many partner universities around the world. 35% of the students are in their 4th year of study at one of the partner universities or are enrolled in a double degree program. In particular, she has close partnerships with North American universities such as Stanford , MIT , UC Berkeley , CALTECH and Columbia University .

The year in brackets indicates the date of entry into the Ecole Polytechnique.