The Arts et Métiers ParisTech (formerly: École Nationale Supérieure d'Arts et Métiers , ENSAM) is one of the elite universities in France . Arts et Métiers is known for its three-year engineering course, the cursus étudiant ingénieur généraliste , a course that is very mechanical engineering, but aims to train universal engineers. In terms of numbers and prestige, this course is by far the most important course at ENSAM. The Gadz'Arts are the well-known ENSAM student association. Almost all students in this course (whose didactic program has been called the Formation d'Ingénieur en Technologie pour l'Europe (FITE) since 2004 ) are members of Gadz'Arts. Students from other degree programs are excluded from regular admission to the compound. The Gadz'Arts admission rituals at the beginning of the course are an example time and again the subject of the French press about the phase de transmission de valeur (PTV) existing at many elite universities , or the legally forbidden Bizutage (German: desecration ). In addition to the classic cursus étudiant as an elite university education, there is now also the option of becoming an engineer généraliste in dual training or in military dual training ; these paths are far behind the traditional path in terms of reputation. In addition, Arts et Métiers also offers two-year master’s courses and doctoral courses . 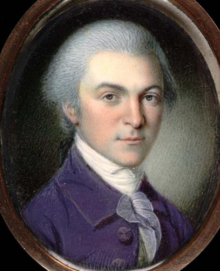 Inspired by his travels in Germany and England and the associated study of industry there, Count François Alexandre Frédéric, duc de La Rochefoucauld-Liancourt , founded a vocational school for French industry in Liancourt in 1778 . In this vocational school, practical vocational training was combined with general education . After the Duke fled France from the Revolution in 1792, this vocational school was moved to Compiègne and attached to the Prytanée national militaire - a French military school. Napoléon Bonaparte helped the vocational school to regain its independence in 1803 and gave it the name École Imperial d'Arts et Métiers . The curricula were designed by scholars such as Louis Monge , Pierre-Simon de Laplace and Claude-Louis Berthollet . In 1804 another campus was founded in Beaupréau . In 1806 the vocational school was moved from Compiègne to Châlons-sur-Marne in a confiscated monastery. The oldest ENSAM campus still exists there today. Due to this fact, the date ENSAM was founded is often incorrectly given as 1806. The count was appointed general supervisor of ENSAM. Shortly afterwards, the second campus was relocated from Beaupréau to Angers in the Abbaye de Ronceray. The Angers campus still exists today. In 1823 the count was urged to resign from his leadership position within ENSAM. He passed away 2 years later.

1828 until the Second World War

On May 22, 1843, the French parliament decided to set up a campus in Aix-en-Provence . This campus still exists today. In 1847, after several attempts and against the opposition of the university administration, the Société des Anciens Élèves (SOCE) was founded, but it did not appear publicly until the 1860s. Further campuses that all exist to this day were founded in the following years: Lille 1900, Cluny 1901, Paris 1912.

After the war until today

During the two world wars, most of the teaching at ENSAM came to a standstill. Almost all of the students did military service. The memorial plaques with the names of the fallen students in the campuses founded before the war testify to this. In 1963 the Bordeaux campus was founded. In 1993, the decision was made to found a Franco-German ENSAM campus in Metz. This campus opened in 1997. The aim was to have a campus with a high proportion of German students. At the same time the double diploma with Karlsruhe was established. Karlsruhe was unofficially seen as the ninth campus by the student union, since ENSAM offered its students to complete their first 2 years in the cursus étudiant ingénieur généraliste in Karlsruhe until 2012 and therefore there was also a PTV and "Karlsruhe classes" of ENSAM. The development of the Metz campus as "German-French" fell far short of expectations. Between 2012 and 2017 there were fewer than 5 German students per year at ENSAM.

Applicants for the more than 1,100 places that are awarded annually have to take part in an admissions competition ( concours ). As a rule, they have previously completed two years of preparatory classes ( classes préparatoires ), which are offered at selected high schools for high school graduates who have already been selected. The ENSAM recruits students from different prépas PSI, PT, MP, PC and their numerous variations. Foreigners can also take part in the concours. Some of them (who mostly come from former French colonies or protectorates and have attended preparatory classes either there or in France) take part in the Concours like the French, the others are selected in their universities around the world and compete internationally for the few Places. At the moment, the study regulations for the Formation d'Ingénieur en Technologie pour l'Europe are called FITE for short. In contrast to the usual, rare revisions at German universities, these study regulations are revised annually.

The focus of ENSAM is on manufacturing technology. Every campus is equipped with a large number of production equipment for this purpose. Every campus has its specialty and orientation. The orientation of the Metz campus is z. B. automobility. The local centers of ENSAM are often embedded in local research communities with the universities and institutes on site.

The three main subject areas are: 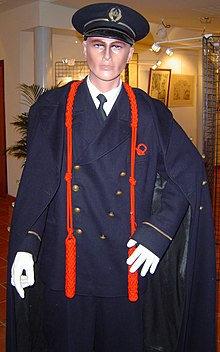 Current uniform of a sophomore student

Most of the students are members of Gadz'Arts (from Garçon des Arts et Métiers ), sometimes further abbreviated to Gadz . There are also 30,000 former students of Arts et Metiérs in this association. The Gadz'Arts are thus one of the largest student associations in the world. The 2017 vintage is expected to be the year in which the number of Gadz'Arts (including deceased members) exceeds 100,000. Organizationally, there is a separation between the Gadz'Arts who are still studying, the PG (petit gadz) and the no longer studying Gadz'Arts den Archis (from archive ). The PGs are organized in the union des élèves des Arts et Métiers , which is made up of sub-associations on each campus. The Archis are often members of the Soce , the Société des ingénieurs Arts et Métiers .

In this connection, the new students should not only acquire the technical skills they acquire at the university, but also social values ​​such as B. Convey brotherhood. These values ​​are passed on at the beginning of the academic year in a "value transfer period", the PTV ( période de transmission des valeurs ) to the freshmen. The PTV is often the subject of sharp criticism in the media and is subject to special legal regulations and is monitored by the French Ministry of Education. PTV is designed differently depending on the campus. Characteristic of the Gadz'Arts is the uniform, which is reminiscent of a naval uniform from the 19th century. However, this uniform is only worn on official occasions. There is also the unofficial uniform, which consists of a wide range of smocks with torn buttons. The most widespread variant for first and second year students is a gray coat called Biaude , which is individually decorated by hand by the students.

The Gadz'Arts speak a sociolect the Argadz (suitcase word from Argot and Gadz'Arts). Argadz is characterized by the fact that French serves as the basis, but the vocabulary is greatly expanded by terms, some of which are of unknown origin. A characteristic feature is the abbreviation of words (beyond recognition) and the total substantivability and desubstantivability of all Argadz words, which is unusual for French. The Argadz serves to exclude non-Gadz'Arts and should make it difficult for outsiders to understand Gadzart's internal communication and also have a humorous effect.

Each ENSAM campus has at least one anthem. There is also a Gadz'Arts hymn and other songs on various topics. These songs are i. d. Usually learned by heart by the students in the first semester during the PTV. The songs are performed publicly in a monome on festive occasions . The students march in a row in unison and sing the songs.

In order to strengthen the Franco-German exchange, the Metz Technopôle campus was built in 1996 as a location near the German border. The German students of the double diploma (today at the German universities B. Sc. & M. Sc.) Begin their studies after the intermediate diploma on this campus. The European branch of Georgia Tech is also located in Metz Technopôle . For the German students there are two options for the double diploma from Karlsruhe or Dresden. Group A: You study the third and fourth year of study (i.e. 3rd year B. Sc. And 1st year M. Sc.) At Arts et Métiers and can complete your studies with six months of extra regular study time in Karlsruhe / Dresden after 5, Quit 5 years. Group B You can complete the last year and a half (i.e. 9th - 11th M.Sc.) of studies in France. In the past, students at Arts et Métiers had the opportunity to start directly at KIT after completing the Concours . This option does not currently exist. For the French students, there is only option group B. You and your German fellow students switch to the third master's semester at the German university. The graduates of the double degree program receive the academic degrees "  Diplôme d'ingénieur d'Arts et Métiers ParisTech  ", Bachelor of Science and Master of Science, whereby the Bachelor of Science is reserved only for students starting at KIT.