MIT is a redirect to this article. Further meanings are listed under MIT (disambiguation) .

The Massachusetts Institute of Technology ( MIT , German  Massachusetts Institute for Technology ) is a technical college and university in Cambridge in the US state of Massachusetts . The college is on the Charles River in Cambridge, directly across from Boston and downstream from Harvard University . Founded in 1861, MIT is a private , non-denominational technical university that was the first to train chemical engineers and incorporated economics , social sciences, and humanities into engineering training. There are currently over 10,000 students studying at MIT.

MIT prides itself on the high level of education, with students getting involved in research activities early on. It is considered one of the world's leading top universities and has always achieved a top position in international comparisons. The university is a member of the Association of American Universities , an association of leading research-intensive North American universities that has existed since 1900.

A network of high-tech small businesses has established itself around MIT : In the late 1990s, venture capital was in abundance, so that the preferred career path of many students was to found a high-tech startup.

The university is also the founding organization and seat of the World Wide Web Consortium (W3C), the standardization body for the World Wide Web . Since 2002, MIT has been making all of its course materials publicly available on the Internet, thereby supporting OpenCourseWare . In the MIT OpenCourseWare project alone, almost 2000 courses in 33 subjects were made available in this way. 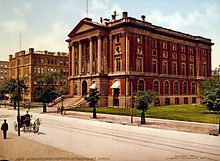 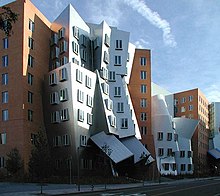 MIT was founded on April 10, 1861 as a three-part institution, based on the model of German and French-speaking polytechnic universities, consisting of “a society of arts, a museum of arts [industrial arts], and a school of industrial science.” The founder William Barton Rogers , a well-known naturalist, wanted to create an independent university that would meet the needs of an increasingly industrialized America. Because of the civil war , the first students could not be accepted until 1865. In the years that followed, MIT gained a first-class reputation.

Because of the ongoing funding gaps, a merger with the neighboring Harvard University was planned around 1900. However, this could not be enforced due to massive protests by former MIT students. In 1916 the campus was moved from Boston to Cambridge on the opposite bank of the river.

After the Second World War , in which MIT contributed to the development of radar technology , MIT's reputation continued to grow. The arms race and space travel of the Cold War created a state-sponsored demand for high technology . MIT also became known for the Whirlwind digital computer , which was developed and built there from 1944 to 1952 under the direction of computer pioneer Jay Wright Forrester .

Further developments from the MIT laboratories in the post-war period were the ferrite core memory and the automatic space probe control of the Apollo program . Since the advent of the personal computer , MIT has also played a central role in the key technologies of the information age.

In 2001, MIT President Charles Marstiller Vest stated that MIT as an institution had discriminated against the careers of women faculty members and researchers. He announced organizational steps to ensure gender equality. On December 6, 2004, Susan Hockfield , a researcher in the field of molecular neurobiochemistry, became the first female president after 15 male presidents. In July 2012 she was succeeded by Leo Rafael Reif .

On April 18, 2013, a police officer from the campus police from Tamerlane and Jokhar Zarnayev , who had perpetrated the attack on the Boston Marathon three days earlier, was shot dead in front of the Stata Center . 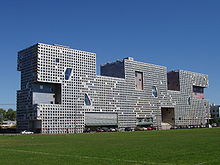 Simmons Hall (dormitory for all freshmen, completed in 2003)

The MIT campus is located in Cambridge not far from Harvard University, directly on the Charles River with a view of the Boston skyline . At the east end it borders the Longfellow Bridge , which leads to Boston.

From the founding years of MIT, the “Maclaurin Buildings” should be mentioned, which form the entrance area to the campus. They were designed by Welles Bosworth in the neoclassical style of the time. They were completed in 1916. Characteristic are the generous lighting and especially the central dome.

The friezes bear the names of great naturalists, for example Aristotle , Isaac Newton , Benjamin Franklin , Louis Pasteur , Antoine Lavoisier , Michael Faraday , Archimedes , Leonardo da Vinci , Charles Darwin and Nicolaus Copernicus , each surrounded by groups with names of suitable researchers who work on the have contributed to the respective research area of ​​the "big ones".

Later buildings from the years 1950 to 1970 lack charisma, even if some of them were designed by MIT graduate IM Pei , such as the Green Building (main building of the Faculty of Geo-, Atmospheric and Planetary Physics), the Institute of Chemical Process engineering as the tallest building on campus and the Wiesner Building, which houses the MIT Media Lab .

An extensive building program recently included the Stata Center, designed by Frank Gehry and completed in 2004, the Simmons Hall student residence designed by Steven Holl , the Zeisiger Sports Center and a new building designed by Charles Correa for the Picower Center for Learning and Memory ", the" Institute for Brain and Cognitive Science "and the" McGovern Institute for Brain Research ".

In 1998 an old building had to give way for the “Stata Center”, which was erected as a temporary measure during the Second World War. It was supposed to be demolished no later than six months after the end of the war, but despite its ugliness, it proved to be a hotbed for creative projects for many years.

The newest and most architecturally interesting buildings include:

The learning workload at MIT is very large in the lower semesters . Nevertheless, the rate of successful course completion is high. This is explained by the anti-authoritarian culture and the paradigm that acquired knowledge must be shared. In practice this means that older students and professors are there to help the younger ones.

Written exams take place regularly during the semester. It is less about specific knowledge than about examining the ability of the students to solve complex problems. There are hardly any multiple-choice tests; the work results can be freely formulated. The analysis and correction of these tests is correspondingly more complex.

There are also practical tasks to solve. The students are given a construction task and compete for the best design solution.

As part of the Undergrade Research Opportunities Program (UROP), even lower semesters are involved in the research activities of your institute . Most of the practical work on this takes place on Friday afternoons and on weekends, when normal teaching is idle.

Since 2007, lectures have also been broadcast over the Internet. The 71-year-old Dutch physicist Walter Lewin - physics lecturer at MIT - "has meanwhile advanced to become a star on the Internet."

In addition to the natural sciences and technology, MIT also has institutes for philosophy , economics , business administration , linguistics and anthropology .

Among the best known research institutes are:

There are some traditional cooperation partners:

These days, there are coordinated lower semester curricula so students can combine courses at MIT and Harvard. The same goes for the female students at Wellesley College , a traditional college for female students only.

For several years now, MIT has been increasingly entering into partnerships with various universities and publicly and privately financed research laboratories. The projects are generally to be financed by the external partner and thus serve to raise funds for MIT. In this way, MIT as a private sector organization markets its reputation and the research capacity of faculty members and students.

The university publishing house MIT Press has been an independent company since 1962 that publishes for the university. The publisher publishes around 200 books and 40 scientific journals per year.

45% of the "undergraduates" (17% of the "graduates") belong to an American minority:

Portions of this article appear since 2006 is out of date to be .
Please help to research and insert the missing information . 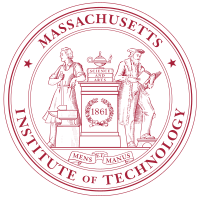 The students are confronted with high demands, but the majority are highly motivated. MIT has responded to allegations that the high requirements would even drive students into suicide: more intensive psychological care should improve the situation.

As at many American universities, the students usually live quite cramped in dormitories on campus. There are traditionally clear differences between different dormitories: some have a hippie culture, while others have a decidedly bourgeois style.

For a university that is not influenced by music, the proportion of students actively making music is quite high: there is a symphony orchestra and several classical choirs with student musicians.

The ethos of MIT is distinctly anti-authoritarian, at the same time one believes in the meaning of a performance elite, whose social status is justified by intellectual superiority, not by origin or formal hierarchical positions.

At MIT, it is customary for information to be disclosed. Every assertion is a possible subject of a critical examination, its acceptance must not rely on generally valid view or directives “from above”.

This ethical attitude is also adopted by many hackers : At MIT, the term hack is broadly defined in the sense of a surprisingly technically sophisticated device, whereby the best hacks have a humorous aspect. The term hacker was coined at MIT, and some of the roots of the hacker culture can be traced back to MIT in the 1950s and 1960s: the forefathers of the hacker scene such as Richard Stallman , Jay Sussman and Tom Knight worked at MIT .

The sports teams are the MIT engineers . The college is a member of the New England Women's and Men's Athletic Conference and thus participates in the third division of the National Collegiate Athletic Association .

see: Category: University Lecturers (Massachusetts Institute of Technology) , u. a .: