The title of this article is ambiguous. Further meanings are listed under Henry Cavendish (disambiguation) .

Henry Cavendish (born October 10, 1731 in Nice , † February 24, 1810 in London ) was a British natural scientist . His best-known achievements are the discovery of the element hydrogen and the first experimental determination of the mean density of the earth (“weighing the earth”), which subsequently made it possible to determine the gravitational constants .

Henry Cavendish was the son of Lord Charles Cavendish (a son of William Cavendish, 2nd Duke of Devonshire , 1704–1783), and Lady Anne Gray, daughter of Henry Gray, 1st Duke of Kent . The Cavendish family belonged to the long-established nobility and were closely associated with many other important noble families in Great Britain . Henry was born in Nice in 1731, where - according to George Cavendish, 1st Earl of Burlington - his mother stayed because of her poor health. His mother died in 1733 after the birth of his brother Frederick (1733-1812).

At the age of eleven, Cavendish was a student at Newcome's School in Hackney , one of the largest and most recognized private schools of the 18th century. On December 18, 1749 he became a student at Peterhouse College, University of Cambridge , which he left on February 23, 1753 without a degree. His first scientific work appeared in 1766 and was entitled Experiments on Factitious Airs ("artificial types of air", i.e. gases produced by chemical reactions). After traveling through Europe with his brother Frederick, he lived with his father in Soho (London) until his death in 1783 . During this time he carried out his electrical and most of his chemical research. He began as an assistant to his father, who carried out scientific experiments himself. At the age of 40, Henry Cavendish inherited a great fortune that enabled him to continue his scientific studies. After his father's death, he moved to a villa in Clapham Common, where he set up a large experimental laboratory. He also owned a town house in Bloomsbury, London, and another house for his library on Dean Street, Soho. He attended the meetings of the Royal Society, of which he became a fellow in 1760 and whose members he dined on Thursdays. Otherwise he avoided social events and even Lord George Cavendish , whom he later made his main heir, he only saw once a year for a few minutes. Apart from that, the inheritance hardly changed anything about his modest lifestyle.

Cavendish exhibited eccentric behavior . He ordered his dinner every day by a note he left on the hall table, and his female employees were instructed to stay out of sight if they did not want to risk being fired. He was extremely shy of women and strangers and avoided talking to them at all. He was a tall man with a high-pitched, thin voice and wore a worn, faded, purple velvet suit and tricorn hat from the previous century. He was a taciturn loner.

One of his most important collaborators was Charles Blagden , who was involved in a large number of his experiments. There is also an intensive correspondence between the two scientists. In 1790 Cavendish also met Alexander von Humboldt , who soon accepted his chemical knowledge. In 1803 he became a member of the Académie des Sciences in Paris.

Cavendish conducted innumerable scientific studies and experiments, most of which, however, remained unpublished during his lifetime. In his entire life, he has only published 20 articles and not a single book. It was not until long after his death, towards the end of the 19th century, that James Clerk Maxwell began to study Cavendish's research and realized that many scientific achievements had already been anticipated by him, such as Ohm's law , Dalton's law , the law von Gay-Lussac and the principles of electrical conductivity. In 1879 he published Cavendish's Experimental Researches . He also expressed his astonishment that he created a detailed manuscript of his research and extensively investigated special questions in his experiments, which at the time only he knew how to appreciate, but which he never published his elaborated manuscripts.

Cavendish died on February 24, 1810 and was buried in All Saints Church in Derby (now Derby Cathedral). He left an important fortune to Lord George Cavendish, the great-grandson of William Cavendish, 2nd Duke of Devonshire . Henry Cavendish was the grandson of the latter. His estate was £ 700,000 with property income of £ 8,000 a year and £ 50,000 with his bank. In 1871, William Cavendish, 7th Duke of Devonshire and principal of the University of Cambridge, donated the money to establish the physics department of the University of Cambridge called Cavendish Laboratory . James Clerk Maxwell was the first director and first Cavendish professor .

The lunar crater Cavendish and the asteroid (12727) Cavendish are named after him. 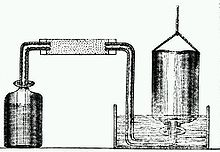 Cavendish's apparatus for generating and collecting the hydrogen

Discovery of hydrogen and rejection of the phlogiston theory

In 1766, Cavendish discovered a gas that was formed by the action of acid on metals, but failed to realize that it was a chemical element. He called the gas inflammable air and interpreted it to mean that the combustible air had escaped from the metal. Since it formed in the same way with different acids, he identified it with the long-sought hypothetical substance phlogiston , which is released from the body when it burns. He tested this by treating the limes, which were left over from the burning of metals and should no longer contain phlogiston , with acid. No flammable air was formed. Joseph Priestley also found in 1782 that metal limes were converted back into metal by the combustible air and the combustible air disappeared in the process. The next step took place after Cavendish repeated Priestley's oxyhydrogen tests in 1781 , in which a "rope" had formed. He found that the "dew" was pure water. Thus water was not elemental, but the long-sought compound oxide of the inflammable air. It consists of the combustible air discovered by Cavendish, soon to be called hydrogen, and oxygen, discovered by Priestley in 1774. In the meantime Lavoisier had also learned of Cavendish's experiments in 1783, quickly picked up on them and in some cases presented them in such a spectacular way that Cavendish's experiments were overshadowed by them. Cavendish's series of experiments to interpret the synthesis of water showed, as did Lavoisier's experiments, the great importance of quantitative measurements in chemistry.

Even after his experiments on the synthesis of water, Cavendish himself stuck to the phlogiston doctrine, which he only reinterpreted. According to him, what Lavoisier took to be the element hydrogen was water bound to phlogiston, while Lavoisier's oxygen was the water from which phlogiston was withdrawn. In the case of the formation of water from hydrogen and oxygen, only phlogiston would have been exchanged.

Determination of the gravitational force and the mass of the earth

Cavendish was the first to succeed in 1797 in an experiment with two bodies of known mass to observe their mutual attraction. This phenomenon had been postulated a century earlier by Isaac Newton in his law of gravitation explaining the motion of planets and the weight of bodies on earth. Using a sensitive rotating balance , Cavendish was able to demonstrate and measure the force with which the heavier test specimen with the mass m 1  = 158 kg and the lighter test specimen with the mass m 2  = 0.73 kg attract each other after shielding all known interferences . The experiment determined assuming the correctness of the postulated by Newton law of gravitation indirectly the mass M planet Earth and thus their average density. The experiment has therefore been popularly referred to as weighing the earth . It is sufficient to assume that the attraction of two spherical bodies is proportional to the product of their masses and inversely proportional to the square of the distance between their centers, so that the ratio of two gravitational forces depends exclusively on the ratio of the masses and distances. In detail, the following applies to the ratio of the force F sample , with which the light test specimen is attracted by the heavy one, and the force F earth , with which the light test specimen is attracted to the earth (i.e. its weight):

R 12 ,  R earth are the respective distances. The mass m 2 of the light specimen does not have to be known because it stands out. After measuring F sample , M earth is the last remaining unknown and can be easily determined. 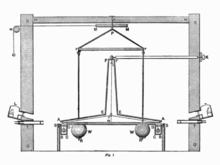 The measuring device - a torsion balance - originally came from the geologist John Michell , who completed it shortly before his death in 1793, but did not take any more measurements himself. Cavendish emphasized that Michell had the idea before Coulomb , who in 1785 had studied electrostatic attraction and repulsion in the same way. To prove the much weaker gravitation, Cavendish had to partially rebuild the balance in order to eliminate disruptive factors, in particular the influence of the slightest temperature fluctuations. He therefore operated his experiment from another room and read the measured values ​​with a telescope. The angular deflection of a dumbbell suspended on a torsion thread with two lead balls was measured when they were attracted by two larger lead balls brought into close proximity. According to Hooke's law, the restoring force was assumed to be proportional to the deflection angle. Cavendish carried out his experiment 17 times with 29 measurements over the course of a year, taking into account even the smallest possible disturbances. His final results for G deviate by 1.2 percent and for the density of the earth by 0.6 percent from today's value. With knowledge of the absolute earth mass, the masses of other bodies of the solar system could now also be determined from the law of gravitation, which like the earth are orbited by observable companions.

Cavendish's experiment is now considered a classic in the history of physics. It is evaluated as the first determination of the gravitational constant G , which is one of the three fundamental natural constants . Cavendish himself was still far from this point of view, even the term "gravitational constant" could only appear in the second half of the 19th century, after the conceptual prerequisite for it had been created in 1873 with the first general definition of a unit of force ( dynes ).