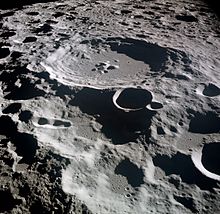 A lunar crater is a circular, mostly flat depression in the bottom of the earth's moon , which is enclosed by a ring-shaped raised wall ( crater rim ).

Nearly all lunar craters by the impact of meteorites resulting impact crater . Volcanic craters are rare and small in proportion.

On the side facing the earth, the moon has around 300,000 craters with a diameter of over 1 km - it is, so to speak, littered with them. The larger structures (60 to 270 km) are called ring mountains or whale plains . Their bottom is usually relatively smooth, so that in some of them you can even see the curvature of the moon ball in the grazing sunlight . As a rule, smaller craters can be seen in the crater floor, which can be traced back to later impacts.

Although the largest craters measure 6 to 8 percent of the "moon disk" (moon diameter 3478 km), they were only discovered after the invention of the telescope - probably in 1610 by Galileo Galilei . They are particularly clearly visible when the shadow boundary (the terminator) is close by twice a month and the crater wall casts long shadows. The bottom of many small craters is then largely in shadow, which is why their depth has long been overestimated.

A typical small crater 5 km in diameter has a fairly sharp ring wall 1 km high and its bottom is a few 100 m lower than the surrounding area. 100 km whale plains have ramparts about 1 to 5 km high; the ratio is on average 1:30 (1:10 to 1:80), so that an astronaut standing inside could often no longer see the wall. The moon's radius is only a quarter of the earth, so its surface is curved 4 times more. The inner walls are often terraced and inclined 20 ° to 30 °; the outer slopes are 2 to 3 times shallower. The center of the crater is often marked by a central mountain. All of this is related to the dynamics of a meteorite impact .

Crater with a concentric double wall

This rare crater shape is a circular crater with a double wall. It looks like a smaller crater is centered on a larger one. One example is Hesiodus A on the southern edge of the Mare Nubium. According to Interstellarum No. 40, about 50 of these craters are known; about 35 of them are on the edge of the Maria, the rest inside large craters. The concentric double craters are not evenly distributed on the lunar surface.

One theory assumes that these are normal craters in which fracture zones have formed. A lava with high viscosity emerged through the fracture zones and lifted the rocks with it. This lava is considerably more viscous than that which Maria formed. Several eruptions of this lava from the same fracture zone are also conceivable.

According to a classification formulated and applied by Charles A. Wood and Leif Andersson in 1978, the lunar craters that have not been significantly eroded or reshaped (e.g. by flooding with penetrating lava) are divided into five types:

Above all, the majority of the large craters were created in a phase of the formation of the solar system known as the Great Bombardment , in which numerous planetesimals and smaller bodies crashed onto the planets and moons that had already formed.

When a meteorite falls from space, it has a speed of 10 to 70 kilometers per second (30 to 200 times the earth's speed of sound). Upon impact, it penetrates up to 100 meters into the rock, which only takes a few thousandths of a second. During this short blink of an eye, all of its kinetic energy is converted into heat and it explodes. The surrounding material is blown away in a conical shape; at the edge of the resulting hole, part of it forms a wall.

When a large object or one hits at very high speed, the lunar surface springs back and forms a central mountain . Something similar happens when a ball falls into the water: A drop jumps up in the middle. This behavior can be simulated well with semolina porridge .

In general, a meteorite hits a crater that is 10 to 20 times larger than it is itself because of its evaporation and exploding. The material ejected from inside forms star-shaped radiation systems in some ring mountain ranges - probably through a kind of dust cloud . You can see them radiating hundreds of kilometers within a radius of 60 craters during a full moon - especially clearly in the 800 million years old, relatively young ring mountain ranges Copernicus , Kepler and Tycho . Since they do not cast shadows at the Terminator, these rays can only be flat, light traces on the dark basalt of the moon .

The mapping of the lunar craters began soon after the invention of the telescope (1610) and gave rise to the publication of numerous lunar maps and, from around 1800, entire lunar atlases. The visual measurement of astronomers was replaced from around 1870 by photographic recordings of larger observatories (especially the Paris and the Lick observatories) and is now mainly carried out by measurements using space or moon probes . The first such project (complete image of the moon including the back of the moon ) began in 1966 with NASA's lunar orbiter program.