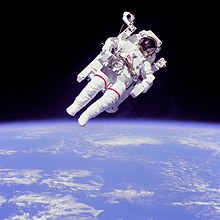 NASA astronaut Bruce McCandless II during a spacewalk on February 11, 1984

A spaceman (also known as a space traveler ) is a participant in a manned expedition into space . The first spaceman was Yuri Gagarin ; he orbited the earth once on April 12, 1961. Depending on the space organization, space travelers are also referred to as astronauts (e.g. NASA , ESA , CSA , JAXA ) or cosmonauts ( Soviet Union , GDR , Roscosmos / Russia ). The Chinese Space Agency(CNSA) mostly uses the term astronaut in English-language reports, but sometimes also the term taikonaut , and occasionally also cosmonaut (or cosmonaut ). Some countries tried to establish other terms such as Spationaute (in France ), Angkasawan (in Malaysia ) and Wiomanaut (in India , vyomanaut in English).

The question of which criteria must be met for space travelers is not without controversy.

According to the definition of the Fédération Aéronautique Internationale (FAI), space begins at an altitude of 100 km above the earth's surface; Space travelers are therefore people who have exceeded this limit, regardless of whether it was an orbital or suborbital flight.

The Association of Space Explorers (ASE), on the other hand, only recognizes people as space travelers who have completed at least one orbit of the earth during a space flight, which does not apply to suborbital flights. All international space agencies have followed this definition to this day. NASA, for example, did not award the first two Mercury pilots Alan Shepard and Virgil Grissom the astronaut wings as an outer badge for participating in space flights for their suborbital flights. Because of possible conflicts of interest with the official organizations, the US company Virgin Galactic, which in the future wants to organize excursions for tourists to the edge of space with the SpaceShipTwo rocket plane , only describes its candidates as “private astronauts”.

In general, people who are part of the astronaut corps of a space agency are often referred to as astronauts even though they do not meet any of the criteria mentioned:

Conversely, people who have been in space for purely tourist reasons are usually referred to as space tourists and not astronauts, even if they meet the definition.

The Soviet Union and the United States, the first countries with a manned space program, established cosmonaut ( Russian космонавт kosmonawt ) and astronaut ( English astronaut ), two differently derived terms for space travelers. This gave rise to the tradition of naming the occupation of a space explorer after the block affiliation of the space program. The first German spaceman Sigmund Jähn from the German Democratic Republic and the first Austrian spaceman Franz Viehböck , who both flew into space with Soviet space capsules, are referred to as "cosmonauts". In contrast, the space travelers Ulf Merbold , Reinhard Furrer and Ernst Messerschmid from the Federal Republic of Germany, who came into space on a space shuttle , were called "astronauts". Even after the fall of the Wall, German astronauts traveled with the now Russian space program as scientists. The astronaut Ulf Merbold became a cosmonaut even before the US astronaut Norman Thagard .

Even today, the term “cosmonaut” is used for participants in the Russian space program and “astronaut” for NASA space travelers. The European Space Agency (ESA) adopted “Astronaut” as its job title, while other countries with their own space programs also developed other names.

Both cosmonaut and astronaut refer to the term " aeronaut " from airship travel.The second part of the word "-naut", which is also used in most of the terms derived from both terms, comes from the ancient Greek ναύτης nautēs ("seafarer / sailor").

Cosmonaut spacesuit for a Soviet lunar landing project , which, however, never came to fruition

The word cosmonaut ( Russian космонавт ; from ancient Greek κόσμος kosmos "space", and -naut ) designates space travelers in a Soviet space program . The Russian space agency Roskosmos also uses this name. It is also used as a general term for space travelers in today's Russia, the CIS countries , in parts of Central and Eastern Europe and by the older population in the new federal states of the Federal Republic of Germany . The word was coined during the space race in the 1950s and, with Yuri Gagarin, became known worldwide as the first person in space. The image of the cosmonaut had a meaning in the Soviet Union that went beyond technical or political achievement as in the West. This is illustrated , among other things, in the Cosmonaut Museum in Moscow.

The title aviator cosmonaut is derived from it.

The NASA decided on 1 December 1958 its astronauts astronauts to name (from ancient Greek ἄστρον astron " star " and -naut ). She assumed she had invented a new word; however, it was already in 1880 by Percy Greg in the novel Across the Zodiac and in 1927 by the French science fiction author J.-H. Rosny aîné has been used in his book Les Astronautes . In large parts of the world today it also stands for “space travelers” in general.

"Taikonaut" is the name of a space traveler who flies into space within the Chinese space program. The term is made up of the words taikong ( Chinese 太空, Pinyin tàikōng  - “literally: great emptiness, so: the universe ”), which means “space” or “cosmos” in Chinese, and ren 人, on the other hand, means “man "Or" person ", together. The suffix -naut was borrowed from the words "cosmonaut" and "astronaut". The prefix “taiko-”, as a shortened form of the actual Chinese word taikong , results in an easier pronunciation, which is also closer to the term taikongren (太空人, tàikōngrén ), the Chinese term for “spaceman”. Individually, the characters tai 太mean “very” or “extremely” and kong 空“emptiness” or “heaven”.

China is the third country in the world to be able to send people into orbit with a self-developed missile system. To these Chinese astronauts of cosmonauts participating in the Russian space program and astronauts inside the space shuttle -Programms the NASA flying to distinguish, this term was coined. The new word also expresses the fact that China has its own manned space flight capacity.

The term "Taikonaut" was first used in May 1998 by Chiew Lee Yih from Malaysia in a newsgroup. Almost at the same time it was coined by Chen Lan from Shanghai and used on his website “Go Taikonauts!”. "Go Taikonauts!" Was the only reliable English-language source of information about China's space efforts at the time. Chiew Lee Yih and Chen Lan developed the word in parallel. Thanks to the “Go Taikonauts!” Website, the word was picked up by the mainly western media in a very short time and became a naturalized term within a few months.

The word spationaute , referring to the French espace “space” (from Latin spatium , “ space / space ”) and -naute , is a French made-up word for space travelers.

Vyomanaut was chosen for upcoming Indian spacemen in early 2010. The name is derived from Sanskrit (from vyomagami , "something that moves in the sky") and -naut .

In Russia, the cosmonauts are trained in the Yuri Gagarin cosmonaut training center. NASA's astronaut corps is based at the Lyndon B. Johnson Space Center in Houston . European astronauts are trained, among others, in Cologne at the ESA European Astronaut Center (EAC), a former DLR facility. 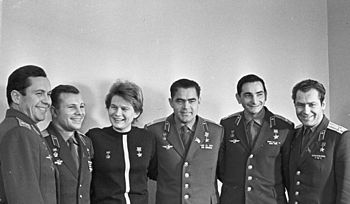 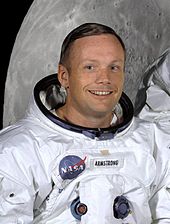 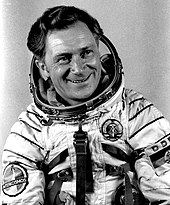 A complete list of all - male and female - astronauts can be found in the list of astronauts , for the record holders see records of manned spaceflight . 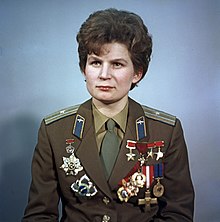 After the Soviet citizens Valentina Tereschkowa (1963) and Svetlana Savitskaya (1982), Sally Ride became the first American woman to fly into space in 1983 . The American Christina Hammock Koch (2019) holds the record for the longest space stay of a woman with 328 days.

The first European astronaut was the French Claudie Haigneré : As part of the Mir-Cassiopée mission , she spent two weeks on board the Russian Mir space station in 1996 .

In 1987, Renate Brümmer was nominated as the first German aspiring astronaut . She completed an apprenticeship at NASA, but was not used. In 2016, the aerospace engineer Claudia Kessler founded the foundation for the first German female astronaut non-profit company (“ Die Astronautin ” for short ) with the aim of bringing a German into space and to the ISS for the first time . Kessler is also the founder of the Women in Aerospace Europe (WIA-E) initiative , an offshoot of the international organization Women in Aerospace (WIA) based in Washington . These organizations promote women in the aerospace industry and represent their interests.

The sculpture Fallen Astronaut by Belgian artist Paul Van Hoeydonck is the only work of art on the moon. It was installed on the lunar surface in August 1971 as part of the Apollo 15 mission and, in addition to the aluminum sculpture of an astronaut, consists of a plaque with the names of eight US astronauts and six Soviet cosmonauts who perished during their service.

In Berlin-Kreuzberg , the mural Astronaut Cosmonaut by the French street artist Victor Ash shows an astronaut in the form of a stencil graffiti. The picture is one of the most famous murals in Berlin . However, it only stands for a small part of the rich panorama of artistic discussions with the motif of the astronaut, which now has a more extensive tradition.