SpaceShipTwo is a private, is located Direction in developing space aircraft manufacturer's The Spaceship Company , a former joint venture of the company Virgin Group and Scaled Composites , since 2012 a wholly owned subsidiary of Virgin Galactic .

The spaceplane was to perform suborbital space flights from 2015 and later be used for space tourism. On October 31, 2014, the prototype VSS Enterprise crashed during a test flight and was destroyed, with one of the two pilots dying. On February 20, 2016, the successor model, the VSS Unity, was officially presented in the Mojave Air & Space Port . On December 13, 2018, the VSS Unity first reached space as defined by the FAA . 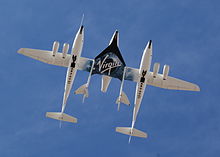 Look under SpaceShipTwo and White Knight

SpaceShipTwo is the successor to the SpaceShipOne type , the first privately financed spacecraft that reached space twice within two weeks as part of the Ansari X-Prize . Construction and development was largely done by Burt Rutan , who is also a co-owner of Virgin Galactic.

Virgin's CEO Richard Branson wanted to invest about $ 100 million in the construction over the next few years. Among other things, over $ 20 million in licensing rights went to Mojave Aerospace Ventures (MAV), a company founded by Rutan and Paul Allen to commercialize SpaceShipOne technology.

On May 4, 2011, during the 7th free flight, the so-called spring mode (see section flight sequence) was successfully tested over the Mojave Air & Space Port.

In June 2012, the Federal Aviation Administration (FAA) approved Scaled Composites for missile testing. The first test flight of SpaceShipTwo with rocket propulsion took place on April 29, 2013, the second on September 5, 2013.

Tourist flights should be operated from 2015. Approval by the FAA was still pending in February 2014, as not all of the required test flights had been carried out by then. About 700 passengers had already paid for a plane ticket. A second spacecraft of the SpaceShipTwo class is also planned, which will be named " VSS Voyager ".

On October 31, 2014, problems arose during a test flight of the VSS Enterprise a few seconds after the solid-fuel rocket of the hybrid drive had ignited. The space plane crashed over the Mojave Desert . The copilot, Michael Alsbury, died in this accident, the pilot, Peter Siebold , survived with serious injuries.

The following important information is missing from this article or section:
See more flights
Help Wikipedia by researching and pasting it . 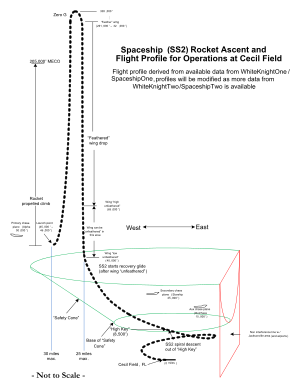 The carrier aircraft White Knight Two is to take off from Spaceport America in New Mexico , carry the spaceplane up to 15.2 km and release it there. After a few seconds of unpowered flight, the rocket engine of the SpaceShipTwo ignites and accelerates it on a steeply upward path up to Mach 3 within thirty seconds. The occupants are accelerated up to three times the acceleration of gravity . After about two minutes and at about 4200 km / h, the engine is switched off.

This is followed by a weightless , suborbital flight lasting about four to five minutes , during which the SpaceShipTwo first ascends further in a ballistic curve and then descends. At the highest point, the flight path is about 110 km above the earth's surface, in the thermosphere , beyond the space limit of 100 km specified by the FAI . There are portholes between 33 and 43 cm in size available to passengers.

Thereafter a nearly two minutes permanent brakes follows the descent in the spring mode ( feather configuration ), a defined stall , which is caused by a 90 ° rotation of the two tail boom including the tail upwards. At an altitude of 16,700 m, the tail girders are turned back and the aircraft goes into gliding flight. It lands at its home airport 25 to 50 minutes later.

According to the designer Rutan, SpaceShipTwo should fly higher and, at 100 to 200 miles, have a longer downrange (descent) phase than its predecessor SpaceShipOne. With a length of 18.3 m, it is almost twice as large and made entirely of carbon fiber reinforced plastic. To brake and stabilize the fall at great heights, the rear wings with the tail units can be pneumatically swiveled upwards so that - as with the predecessor - a defined spin occurs. The leading edges of the wing and the bow are equipped with heat protection.

The maximum number of passengers is six, the spaceship is piloted by two pilots. Test pilot Dave MacKay and chief electronaut Steve Johnson were named as pilots for the spaceship .

As with SpaceShipOne, a hybrid rocket engine is used as the drive . It consists of a tube made of solid plastic that burns as fuel and the gaseous nitrous oxide (laughing gas, N 2 O) supplied from a tank as an oxidizer .

In October 2013, the start of flight operations was postponed indefinitely. The reason was considered to be significant problems with the SpaceShipTwo drive. Up to this point in time, the engines had never been tested for the full required runtime, and according to unconfirmed information, they did not achieve the necessary thrust either.

On July 26, 2007, during ground tests on the further developed rocket engine, a powerful explosion occurred, in which three technicians were killed and three other technicians were seriously injured. The state health and safety agency OSHA in California investigated the accident, but could not determine the direct cause of the explosion until January 2008. Scaled then put together its own investigation team of experienced rocket engineers to investigate the process and rule out similar incidents in the future. The cause is suspected to be an incompatibility between nitrous oxide (N 2 O) and composite materials, which led to the ignition in the tank. Modified materials should then be used. However, objections to SpaceShipTwo's security concept continued to be raised.

Five SpaceShipTwo-class ships were planned. Only two were named in October 2007 and are currently being developed, the VSS Enterprise and the VSS Unity. The VSS Enterprise crashed on October 31, 2014 and crashed to the ground, VSS Unity was unveiled on February 19, 2016.

On September 9, 2016, the VSS Unity carried out the first successful test flight during which it remained connected to the carrier aircraft; the first glide flight took place on December 3, 2016.