This article covers the real spaceship. For the TV series see Raumpatrouille - The fantastic adventures of the Orion spaceship . 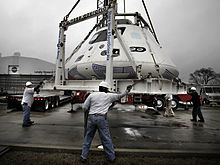 The Orion MPCV (formerly known as Multi-Purpose Crew Vehicle ( MPCV )) is a US manned spacecraft from NASA that is being built in cooperation with ESA . This was designed and partially developed as part of the Constellation program and the ESAS study, first under the name Crew Exploration Vehicle (CEV) and then Orion CEV , and is intended to transport cargo and people to the ISS , to the moon (analogous to the Apollo spacecraft ) and serve to Mars (as a spaceship feeder and landing). In 2010 the Constellation program including the Orion spaceship was canceled, but in 2011 it was announced that the spaceship would again be planned for ISS, lunar, Mars and asteroid flights under its current name. Its first manned flight to the moon is Template: future / in 2 yearsplanned for 2022 .

The name of the spaceship was accidentally disclosed by the astronaut Jeffrey Williams , who was in space at the time , and was subsequently confirmed by NASA. The name was chosen based on one of the brightest star constellations, which was also used for navigation, the constellation Orion .

The development was divided into so-called spiral phases.

The CEV had been in the drafting phase since 2004. In 2005, the industrial design concepts were handed over to NASA, after which NASA selected the concepts from Lockheed Martin and a team formed by Northrop Grumman and Boeing for further development. The original plan was to finance these two concepts until 2008, with an unmanned test flight with prototypes of both spacecraft taking place in 2008. After the results of the development and the test flights, it should be decided which concept should be pursued further.

However, NASA later announced that it would strive for the CEV to be operational by 2010. The aim was to keep the gap between the end of the shuttle program and the start of the CEV flights as short as possible or even avoid it entirely. Therefore, and in order to save money, the follow-up to two projects was canceled, as was the test flight of unmanned models of the spaceship. In November 2005 NASA published the Exploration Systems Architecture Study (ESAS), which contains the precise requirements and mission profiles for the CEV. On August 31, 2006, NASA announced that Lockheed Martin had been selected to build the Orion spacecraft.

NASA planned to develop the Orion spacecraft according to the following schedule:

In early May 2005, details of the project proposed by Lockheed Martin became known. This project saw the development of a space shuttle with the supporting body (Engl. Lifting body ) for four to six astronauts, who on top of a conventional rocket to be launched into space. The landing was planned with the help of parachutes and airbags . Parts of the spaceship should be reusable. In the case of a lunar mission, a mission module and a propulsion stage would also have to be added with the fuel and the engines, which would have been launched with their own launch vehicle and later docked to the CEV. The complete moon train consisting of the CEV, the mission module and the drive stage should weigh around 40 t.

After the ESAS study was published, Lockheed rejected the lifting body approach and also submitted a concept based on a landing capsule. All that is known about Boeing's discarded concept is that from the start it was a landing capsule approach that adhered very closely to the ideas of the ESAS documents.

The era since President Obama

Due to an announcement by President Barack Obama at the beginning of 2010 that he would no longer support the Constellation program , the continuation of the Orion concept and its developments were uncertain. In January 2011, NASA submitted a report to Congress containing a proposal for the fulfillment of duties relating to the NASA Authorization Act 2010: The Orion CEV should continue to operate under the name Orion MPCV and the Space Launch System (SLS) should become its launcher.

In 2014, the Exploration Flight Test 1 was the first unmanned test flight into space. The test service module was manufactured by Lockheed Martin. In July 2019 a test of the rescue system ( in-flight abort test ) was carried out on a special variant of the Minotaur rocket .

The European space agency ESA is supplying a central part of the spaceship, the European Service Module (ESM), which provides propulsion, air conditioning and the supply of electricity, water and breathing air, and would like to "swap" European astronauts with it. The module is being built at Airbus Defense and Space (formerly Astrium ) in Bremen and is technically based on the Automated Transfer Vehicle (ATV) previously manufactured there . In November 2015, the first test module from Europe arrived in the USA with an Antonov An-124 .

In June 2015 it became known that NASA is making one of the Space Shuttle Orbital Maneuvering Systems (OMS) available to ESA for further use in the EM-1 service module. This OMS had previously been used in 19 shuttle missions. In 2017, the use of up to four such units was negotiated.

At the beginning of November 2018, the service module for the first flight to the moon (EM-1) of the Orion spacecraft was flown from Bremen to the Kennedy Space Center / USA.

The list contains the current planning status of the NASA administration, which is still being discussed and whose funding is only considered secured until the EM-2 mission. A final decision on this will be made with the decision of the US legislature on the 2019/2020 budget (starting in October 2019). For an overview of the missions originally planned for Orion, but discarded after the Constellation program was discontinued, see List of Constellation Missions .

Elements of the Constellation program