The CSTS was known under the name Advanced Crew Transportation System (ACTS) until mid-2006 . A first concept should be available by June 2007. A year later the ESA ministerial conference decided on the actual construction of the CSTS.

With the CSTS it should be possible, similar to the planned US spaceship Orion , to operate in low Earth orbit as well as to carry out flights to the moon . A new development based on the Soyuz spaceship was planned , which was to be carried into space by an existing or planned launch vehicle (e.g. Soyuz 2-3 ).

The Japanese space agency JAXA might also have participated in the project.

At the end of January 2009, disagreements between Roskosmos and ESA became public. On March 18, 2009, the contracting parties made a joint declaration that the program had ended. The reason given was that it was not possible to reconcile Moscow's financial ideas with Europe's interests in an equal partnership. Roskosmos initially developed the project further under the PPTS . Later it became a "manned transport ship of the new generation" (PTK NP), which was finally named Orel (Adler).

In January 2004, US President Bush announced his " Vision for Space Exploration ". Among other things, the program stipulated that the United States of America should again carry out manned flights to the moon from 2020 and also manned flights to Mars from 2030.

However , in 2006 , NASA administrator Michael Griffin officially rejected international collaboration on the Orion spacecraft, which was being developed for this purpose .

Since 2004, Roskosmos had been planning a successor to the Soyuz spaceship named Kliper . Despite the positive attitude of the ESA management, the ESA ministerial conference in Berlin in 2005 refused to participate in Kliper, out of concern that ESA could only play a minor role in the development. The tender for Kliper was also closed by the Russian side without an award in the summer of 2006, officially on the grounds that no proposal had met the criteria.

Announcement of the study

On July 25, 2006, ESA Director Jean-Jacques Dordain announced at the Farnborough Air Show that the study of the CSTS would begin in early September 2006 and last about 18 months (through early 2008). The costs for the ESA for the study amounted to 15 million euros, which were raised by seven European countries, including Germany, France and Italy. The budget of the Russian side was not disclosed.

ESA had announced several times that the study on its own spaceship system should not represent a program in competition with the US Orion spaceship, but Marco Caporicci, team member in the manned ESA program, had made it clear:

"We don't want a race with the Americans, the systems should rather complement each other."

On the other hand, Daniel Sacotte, Director of Human Spaceflight at ESA, had said about ESA's goals:

“We will try not to let our dependence on other partners become too strong. That is our priority. "

"Our long-term goal is to develop and operate this new system together with the Russians."

The finished ship was to be "jointly owned" by Russians and Europeans.

Sub-areas of the study

According to a statement by Jean-Jacques Dordain, the sub-areas of the study included:

Preliminary design for a spaceship 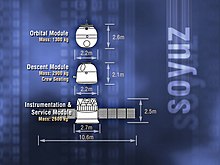 According to the media, the core of CSTS should be a spaceship based on the basic principle of the Soyuz spaceship . It should have storage space for more supplies for longer missions, an improved heat shield for a higher re-entry speed into the earth's atmosphere, a new interplanetary navigation system and space for a crew of three or four. The mission should last at least 18 days. The empty weight would have been at least 10 t (Soyuz-TMA: 7.2 t), especially due to the longer mission duration and the enlargement for four people.

The CSTS spaceship, like the Soyuz spaceship, should consist of three parts:

Advantages of a three-part concept compared to the two-part CEV or Apollo concept:

According to an ESA working paper on the status of the European strategic program for space exploration dated September 12, 2006, the CSTS study also dealt with other variants, such as lifting body concepts , in which the missile itself generates lift, and so-called "advanced" capsules ”, ie re-entry capsules with new external dimensions.

The most likely launch vehicle for the approximately ten-ton CSTS spacecraft was a further development of the Russian Soyuz rocket . From 2010 Soyuz rockets should be able to be launched from Baikonur in Kazakhstan as well as from the Kourou spaceport . Manuel Valls (ESA) was hoping for the construction of the Soyuz-2-3, a further development of the Soyuz rocket, which will be available from 2010/2011 and could launch eleven tons from Baikonur and 12.7 tons from Kourou. The use of so-called "heavy lifters" such as Ariane 5 or Proton , however, was not considered, as these are not approved for manned space flight and would therefore incur additional costs.

A flight to the moon would add at least 115% (if a stage with liquid hydrogen and liquid oxygen (LH2 / LOX) were used) of the mass of the CSTS spaceship for a moon flight module (earth departure stage). This module should accelerate the spacecraft to the escape speed required for a moon flight . After that, the CSTS spaceship would have to carry out all further acceleration thrusts or course corrections itself. In addition, the need for supplies (food, water, oxygen, etc.) would increase.

Since neither ESA nor Roskosmos wanted to raise the necessary funds for a new heavy-duty rocket the size of a Saturn V , an Ares V or an Energija , it made sense to split the CSTS into two or more rocket launches and to couple the parts in Earth orbit.

A CSTS spaceship should be used in 2012 or, according to other press articles, in 2014 as the first functional version of the CSTS for LEO flights (e.g. to the ISS). ESA's (preliminary) planning for a manned lunar mission as part of the Aurora program, however, assumed a possible start between 2020 and 2025.

In a variant, the CSTS would take off from Kourou or Baikonur and dock with the ISS. The space travelers will remain on the ISS until an additional stage of propulsion is launched into earth orbit. The CSTS spaceship would then disconnect from the ISS and connect to the propulsion stage before it accelerates the system into a lunar transfer orbit.

A manned moon landing would be different from a moon flyby, as the CSTS spacecraft would have to enter lunar orbit and leave it again at the end of the mission, which requires more fuel. In addition, at least a third rocket launch for a moon landing module would be required.