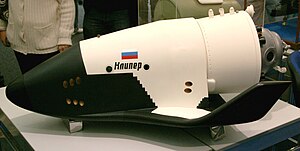 Kliper ( transliteration from Russian Клипер , in transcription also Clipper or Klipper ) was a concept of the Russian space agency Roskosmos for a partially reusable spaceship in a support hull design for low orbits (LEO, Low Earth Orbit ).

The preparatory work began in 2000 at RKK Energija , and the concept was first presented to the public on February 17, 2004 at a press conference in Moscow. The maiden flight was planned for 2013 at the earliest and should then replace the tried and tested Soyuz . The European Space Agency (ESA) was interested in the project, but switched to the joint Crew Space Transportation System project in summer 2006 , which in turn was discontinued in 2009. RKK Energija developed Kliper independently and planned to complete the project in its economic structure at the end of 2007. a 1: 1 mock-up was produced. After Roskosmos took over RKK Energija , the project was finally discontinued in July 2007.

In contrast to the space shuttle concept, the Kliper was supposed to be mounted on a normal launcher so that no separate engine was required. This makes Kliper more similar to the Buran space shuttle , which, however, weighs about six times as much and also has a cargo hold to launch satellites. Kliper did not have this option, so that no special launch vehicle was required.

Kliper consisted of a return module that should be reusable at least 25 times, offered space for six people (including two pilots) and should bring up to 700 kg of cargo into space or 500 kg of material back to Earth. As with Soyuz, a non-reusable service module was docked. a. Provided oxygen , water, fuel and avionics . The clipper's heat shields should also not be reusable. The entire spacecraft would have had a launch mass of approximately 14.5 t, of which 9.8 t for the return module and 4.7 t for the service module; the landing mass would have been 9.5-10 t. The landing itself should take place fully automatically on a controllable paraglider . Two versions of Kliper are to be investigated: a lifting body and a concept equipped with wings.

As a launch vehicle , RKK Energija initially proposed a planned further development of the Soyuz rocket called the Onega . However, since the Russian space agency did not want to raise the development costs of the Onega, an Angara A3 or a variant based on the Zenit was discussed. Of all the suggestions made, the Zenit was the only porter to make multiple flights. Since the Zenit is produced in Ukraine , the Angara would have been the more advantageous launcher for Russia. The first test start of an Angara was planned for 2011, but did not take place until 2014 for financial reasons. The final decision on the launcher was not made until the project was discontinued.

Computer graphics of the Kliper

The main task of Kliper would have been to transport space travelers and space tourists to low earth orbits or to the International Space Station and to use them as a crew rescue vehicle for the ISS. Theoretically, a spaceship similar to the American Orion could have been developed on the basis of Kliper as well, suitable for manned lunar or Mars space flights .

Despite the very low costs, the financing was not secured; however, there were signs of progress on the project. At the end of 2004, both the Russian TV station Pervy kanal and NBC reported about it. RKK Energija presented a 1: 1 mockup of the spaceship.

Russia had also invited other countries to develop Kliper. In July 2005 the first concrete talks were held with the European Space Agency. However, at a meeting of the European Space Council in December 2005, no funds were granted to Kliper. As a result, ESA was unable to contribute 51 million euros to the development as planned. The agency initially wanted to continue to participate in the project.

After ESA's participation in development was canceled, RKK Energija pursued the project until the summer of 2006. In July 2007, however, Roskosmos finally stopped it.