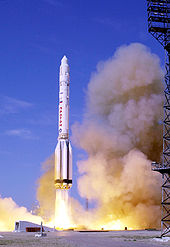 Start a Proton-K, which the module Zvezda to the International Space Station ISS promoted (July 2000)

Launch of a Proton-K with the ISS module Sarja (Baikonur, 1998) 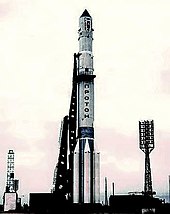 A four-stage proton-K / Blok-D with the garnet - Space Telescope (Baikonur, 1989)

The rocket was initially created in the first half of the 1960s as a design for a super-heavy ICBM , which was supposed to be used to transport 30 to 100 megaton warheads as part of the Soviet military's Global Rocket 2 program . A corresponding order to the OKB-52 was issued (by government resolution No. 409-183) on April 29, 1962. At the instigation of Vladimir Tschelomeis , the head of the OKB-52, came with a government resolution of August 3, 1964 (No. 655- 268) added a manned lunar orbit project with a spacecraft (LK) specially developed in OKB-52 as a civilian mission. After the military project of the UR-500 was abandoned with effect from May 15, 1965, a commission of experts decided in August to also cancel the lunar spaceship LK. Despite the meanwhile successful first take-off on July 16, 1965, the UR-500 was without a payload. Thanks to the intervention of Academy President Mstislaw Keldysch , the powerful rocket found further use in the manned lunar program . On the recommendation of the expert commission initiated by him, the merging of the competing lunar orbit programs of the OKB-52, which the UR-500 should continue to provide as a carrier, and the OKB-1, of which a modified version of the one that is in a mature phase of development Soyuz spacecraft should be used on October 25th by government order instructed.

With the proton all Soviet space stations (were Saljut , Alma , Me ), the base module Sarja the ISS , the Soviet planetary probes to Mars (from Mars-2) and Venus (from Venus-9) as well as the moon spaceships Zond 5 to 8 in the framework of the Soviet lunar orbit program started. However, the Proton's payload was not sufficient for a manned moon landing.

Since its first launch in 1965 and the frequent false starts in the first few years of operation, the Proton has undergone extensive improvements. The current versions of the Proton rocket with the upper stages Blok-D M and Bris-M are internationally among the most cost-effective and reliable launchers. For safety and environmental reasons, the use of the hypergolic and toxic fuel combination 1,1-dimethylhydrazine / dinitrogen tetroxide , which can be released in the event of false starts, remains potentially questionable .

The Proton is technically obsolete and runs on highly toxic fuel. Since the beginning of the 2000s, there have been plans to replace them with the new, more powerful Angara A5 . On December 23, 2014, the A5 made its first flight from the Plesetsk spaceport . The full operation of the A5 planned for the 2010s, however, was postponed to the 2020s, among other things because of a launch site that had yet to be built at the Vostochny Cosmodrome , as many orbits cannot be reached from Plesetsk.

In order to bridge the waiting time until the Angara is operational and still be able to stay in the highly competitive commercial business, a further development of the Proton to the Proton-M was carried out as an interim solution. The price for a launch of the rocket should be around 70-80 million US dollars. International marketing is carried out by the International Launch Services (ILS) consortium , which until September 2006 also included the US aerospace company Lockheed-Martin . Since May 2008 the majority of ILS has been held by GKNPZ Khrunichev .

According to the planning status of 2019, production of the Proton is to expire in 2021 and operations to end in 2025.

Depending on the version and mission, the Proton has three to four stages (the initial launch version was two-stage) and can bring a payload of up to 21 tons into low-earth orbit. The first stage with a mass of approx. 450 tons consists of a central tank with a diameter of 4.1 meters and a length of 21 meters for the oxidizer nitrous oxide and six external tanks for the UDMH fuel with a diameter of 1.6 meters, each with an attached engine RD-253 . The outer tanks are in the form of boosters and are often mistaken for, but are not. This construction method resulted because all essential parts including the central tank should be transportable on the rail network (limitation of the diameter due to underpasses and tunnels). Under these restrictions, the design with the six external tanks including the engines guarantees optimum performance, but similar to the R-7 with its strap-on boosters, it does not allow the payload to be increased by adding real boosters. The amount of fuel in the first stage allows a burn time of about 125 seconds. The second stage with a mass of about 135 tons has three RD-210 engines and one RD-211 engine, is 10.9 meters long and delivers a vacuum thrust of about 2300 kN. The fuel supply of the second stage is sufficient for a burning time of about 160 seconds. The third stage is powered by an RD-213 engine. All three stages use the hypergolic and toxic fuel combination UDMH and nitrous tetroxide.

To reach geostationary orbits and to launch interplanetary probes, the proton is given an additional fourth stage. The first launch of a four-stage proton took place on March 10, 1967 as part of the manned lunar program. The fourth stage was named Blok-D , several versions of this stage, designed for different payloads, emerged in later years through improvements. All Blok-D versions use the RP-1 fuel combination (a type of kerosene) and oxygen . From 1999 a new upper stage was used - the Bris-M, which now primarily transports commercial payloads into space. Like the first three stages of the Proton, it also uses the fuel combination UDMH and nitrous tetroxide.

The focus of the further development was the increase of the payload, the payload volume and the flexibility of the ascent lifts. In the background there were also aspects of the competition within the Russian space companies.

In addition to the use of the Bris-M upper stage (in contrast to Blok-DM also from the Russian manufacturer GKNPZ Khrunitschew ), the engines of the first stage were replaced by six RD-275s with approx. 7% more power (1635 kN ground thrust each). A completely new digital steering system (Manufacturer Piljugin Center Moscow) allows for better fuel efficiency and more varied routes to the surface and is also 200 kg lighter than the previous Ukrainian , analog system. The telemetry system (production association for measurement technology in Koroljow ) was also digitized . Payload fairings of composite materials are m in sizes of 13.20, 11.60 m and 19.75 m in length, 4,35 m and 5 m in diameter are available.

Production is carried out by the GKNPZ Khrunichev group in Moscow- Fili , after a rail transport, the final assembly of the rocket is carried out in the MIK-92 assembly complex on the Baikonur cosmodrome . The start takes place via the ramps PU-24 and PU-39. The first start of the further development took place on April 7, 2001, after the Bris-M upper level had already been successfully tested in connection with the older Proton-K. The Proton-K was temporarily used in parallel for Russian payloads, as it was a little cheaper than Proton-M.

From 2012 ILS also wanted to carry out double launches of medium-weight satellites in the geostationary transfer orbits with the Proton.

On July 2, 2013, a Proton-M was launched from Baikonur. Just four seconds after take-off, the rocket deviated from the planned course. Less than thirty seconds after the liftoff, the missile hit the ground less than two kilometers from the launch pad and exploded. The carrier system and the payload (three GLONASS satellites) were completely destroyed.

The investigation into the accident came to the conclusion that presumably incorrectly installed angular velocity sensors were the cause of the crash.

On May 16, 2015, a Proton-M rocket crashed about 8 minutes after takeoff. According to the initial information, the third stage switched off too early due to increased vibrations caused by an imbalance in a turbo pump unit. The payload, the Mexican communications satellite MexSat-1, was lost.