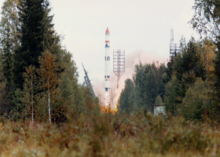 Cyclone [ ʦɪklɔn ] also Tsiklon , Tsyklon ( Russian Циклон for cyclones ; English Cyclone , Tsyklon ) is a Ukrainian rocket type, on the R-36 - ICBM based. It was developed for military purposes in the Soviet Union since 1965 and is still used today by Ukraine for orbital transport of satellites.

The development of the two-stage Zyklon or Zyklon-1 ( GRAU index 11K64) began in 1965 in the Soviet Union on the basis of the R-16 . In order to convert it into a launcher, only minor modifications were necessary and so the first test missions took place as early as 1967. By 1971 there were 25 starts in suborbital orbits up to 1000 km altitude.

Around the same time, the two-stage Zyklon-2M (today simply called Zyklon-2 , GRAU index 11K69) was developed, which was launched in 1969 and was in use until 2006. The payload capacity was 2820 kg for a 200 km orbit at an inclination of 65 °. As with all rockets in this series, UDMH and nitrous tetroxide were used as fuel. The payloads mostly had their own drive (kick stage) to reach their path. The Zyklon-2 was only launched in Baikonur and used exclusively for military payloads, e.g. B. the US-A naval reconnaissance satellite with a nuclear reactor as an energy supply. Since 1988 the only payloads have been ELINT reconnaissance satellites of the type US-P and US-PU . A total of 106 rockets of this type were launched, 105 of them successfully. It was recently offered in the form of an improved Zyklon-2K with three stages and a larger payload fairing, which, however, was not yet used.

The three-stage, somewhat stronger Zyklon-3 (NATO code SL-14, GRAU index 11K68) was developed in the 1970s. The approval for the development of the third stage (designation: S5M, length: 2.72 m, diameter: 2.42 m, mass: 4.6 t, burning time: 126 s) took place on January 2, 1970. This became from the re-entry part of the R-36O and is smaller in relation to the other two stages. The Zyklon-3 had a payload capacity of 4100 kg in a 200 km orbit and could thus replace the Vostok launcher. It only started in Plesezk , for the first time on June 24, 1977 and most recently on January 30, 2009. As payloads, the Zyklon-3 carried the Strela communication satellites (six at a time), Meteor weather satellites, Interkosmos satellites, the French / Soviet satellite Oreol and Zelina- D electronic reconnaissance satellites . The rocket launched a total of 121 times, eight of which were false starts.

A version improved by Ukraine was planned as Zyklon-4 , with a larger and heavier upper stage (13.4 t instead of 4.6 t), a larger payload fairing and a digital control system. From 2015, these should launch light satellites into geostationary transfer orbits from the Brazilian launch site Alcântara . However, after more than ten years of preparation, Brazil withdrew from the contract in 2016. Instead, Maritime Launch Services would like to set up a launch site for the Zyklon-4M rocket variant in Canada . The first launch was initially planned for 2020 and is now expected in 2021. The Zyklon-4M is also to receive a newly developed first stage, which is derived from the Antares and / or the Zenit .

The three-stage Zyklon-1M small rocket for payloads of up to around 1 t is also planned. Its first stage is to be powered by the RD-870 engine developed in Ukraine, which was originally intended for the Zyklon-4M. The RD846V is to be used for the second stage. Both run on kerosene and liquid oxygen. There is also a kick stage that uses the modern fuel hydroxylammonium nitrate . The rocket is to be launched from a new spaceport on the Black Sea coast near Mykolaiv . The concept for the rocket and launch site was presented in April 2019.