Telemetry ("remote measurement"; from ancient Greek : τῆλε tēle "fern" and μέτρον métron " measure , scale") is the transmission of measured values ​​from a measuring probe ( sensor ) located at the measuring location to a spatially separate location. At this receiving point, the measured values ​​can either only be collected and recorded or also evaluated immediately.

Telemetry is often supplemented by a (return) action path to the sensing sensor in order to be able to react to the measured values ​​supplied with suitable measures. This return path is called remote control (telecommanding, tele-command). 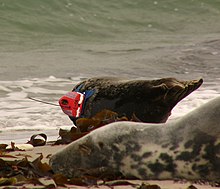 Seal with transmitter. The transmitter is glued to the animal's fur and is thrown off the next time it changes fur.

Telemetry, in which measurement data is transmitted over greater distances, is called far-field telemetry. This is the case, for example

Often the data are recorded at spatially widely separated measuring locations and sent by telemetry to a central point in order to be recorded and / or evaluated there.

Near-field telemetry is the term used for applications in which data is transmitted over short distances from moving machine parts to stationary receivers. For example, status data from gas turbine rotors or tire pressures from rotating vehicle wheels are transmitted.

As a rule, the measured values ​​must first be brought into a suitable form so that they can be telemetered.

The transmission of DC voltage signals such as those used requires special attention . B. occur with resistive or capacitive sensors (e.g. voltage change at a constant current , temperature-dependent resistor). Such a measuring voltage is to be converted into an alternating voltage or a pulse sequence by suitable measures so that changes in the supply voltage and temperature drifts in the transmission modules do not simulate changes in the measured value. A pulse train, for example, whose pulse frequency or duration depends on the resistance or capacitance value of the sensor, is suitable for this .

The transmission frequency of the telemetry transmitter can be modulated with such a pulse train or with an alternating current signal supplied directly by the sensor .

This signal is recovered in the receiver by suitable demodulation and the associated measured value is derived from it. In the case of analog measurement signals, a pulse shaper with a downstream low-pass filter is used, for example .

Today, only digital telemetry systems are practically in use. The recorded measured value is converted into a binary character string with the help of an analog-digital converter (ADC = A / D converter) , which can then be telemetered with a suitably modulated carrier and reconstructed at the receiving end without any loss of information .

The differences in the available data bandwidth are enormous: simple near-field and most far-field telemetry have to get by with a few kbit / second, which is sufficient for monitoring stationary states of a few parameters. In contrast Nahfeldtelemetrien can for turbomachinery in sum up to 180 Mbit / second transfer ( RF technology ); With optical transmission on the rotor axis, even more than 600 Mbit / second are possible. Such systems can monitor a large number of vibration measuring points with a high bandwidth simultaneously.

Sensor networks can be considered as a new telemetry technology in which many sensors combine the signal strength of their neighbors to determine distance. This results in precise radio location with simple means for numerous participants .

In telemetry as a method of zoology , GPS receivers are increasingly being used, which, compared to the use of conventional radio direction finding or satellite telemetry, enable significantly less work and more extensive and more precise data acquisition .

Nowadays, data transmission via GSM / UMTS is increasingly used. With this mobile phone technology, the sensors communicate with the receiving station through a GSM module. Simple systems transmit via CSD , HSCSD or SMS . With the introduction of ever more intelligent processors in the GSM modules, communication now often takes place via GPRS protocol and the Internet , which can also save costs.

The use of this technology has the advantage of a large, global reach . However, local dead spots in the GSM network have to be accepted, since cell phones were designed for mobile use. To ensure reliable work, special attention must be paid to the design and location of the GSM antenna at the receiving station.

Combination with a remote control

Here is a data traffic between two stations instead:

The on-site sensor carrier is equipped with actuators that can be controlled remotely by an operator based on the sensor information supplied. Examples of this are special robots or objects in flight ( drones ) equipped with cameras and telemetry .

Telemetry has been used for sending messages from weather balloons since the late 1920s . It experienced a great boom with the development of large rockets in the 1940s.

Guided missiles report their course to a ground station ; this can send back control signals.