The electric current , often only power , is a physical manifestation of the theory of electricity . In the everyday meaning of the term, it means the transport of electrical charge carriers , for example electrons in conductors or semiconductors or ions in electrolytes . This form of flow is also known as convection flow . As described by Ampere's law , it becomes noticeable through a magnetic field and usually leads to a heating of the conductor. A current flows in an electrical circuit as soon as there is a conductive connection between the connections of the source .

In addition, the displacement current is counted as an electric current . This is not caused by the movement of charges, but by changes in the flow of an electric field . He occurs z. B. between the plates of a capacitor when loading or unloading and, like the convection current, generates a magnetic field.

Already Thales of Miletus to in the 6th century. BC discovered that amber attracts light bodies if it is rubbed with cloths beforehand. He could not find an explanation for this, but the word electricity (from the Greek "electron" for "amber") still points back to this ancient discovery.

The technical use of electricity began in the middle of the 19th century with telegraphy and electroplating . For both applications, the power of the batteries was initially sufficient. Werner von Siemens discovered the dynamo-electric principle around 1866 and used it in the development of the first electric generator , which he was able to market as a blasting machine for igniting explosive charges . From 1880 these generators developed more and more into large machines in order to be able to satisfy the electricity needs of the ever-growing power grids. Primarily, these networks were used to provide electricity for lighting with arc and incandescent lamps in the public and the first private households. Another application of the electric current was its use in lighthouses, since the arc lamp has a much higher light intensity than the candles or petroleum lamps previously used . As a result, the first power plants were built , which were initially powered by simple water turbines and steam engines. High-performance steam turbines have been available since the beginning of the 20th century and have been used as prime movers in power generation until the present day .

The physical quantity current strength is used for quantitative information on electrical current .

Origin of the stream

Electric current can have different causes:

Relationship with the electrical voltage

If - for example between the poles of a battery - there is a potential difference , it is referred to as an electrical voltage. Due to the then existing electric field , a force is exerted on the charge carriers; they experience an acceleration when they are mobile. This happens, for example, when a light bulb is connected to the poles with metal wires. The drift speed of the charge carriers during this directed movement arises in the interplay with scattering processes. The current density can be calculated by multiplying the drift speed by the space charge density .

The drift current does not grow arbitrarily despite the acceleration; at a given voltage there  is a limited current intensity  . This observation is explained with an electrical resistance  . It is defined by the relationship

In metals, some of the electrons, the so-called conduction electrons, are not bound to a specific atom, but rather 'belong' to all atoms, see metallic bond . According to the Drude model , the conductivity of metals is proportional to the number of conduction electrons and their mobility. The ribbon model is more realistic .

In the case of ion conductors, in contrast to metals, direct current usually results in a material change in the electrical conductor. This effect is used in electrolysis . Such chemical processes can change the nature of the conductor in such a way that the electrolytic conductivity changes gradually. If such a material transport is undesirable (for example in the case of a gas discharge), it can largely be prevented by alternating current.

Effects of the current

The occurrence of an electric current manifests itself through the following effects:

Practically all electronic devices in the household such as radio and television receivers, computers or the controls of today's washing machines require direct current for their power supply. But also in the energy technology DC currents are used, for example, in the fused salt electrolysis of aluminum extraction, for good variable speed DC motors (now increasingly converters and asynchronous motors replaced), as an intermediate circuit in power converters in transmission equipment and vehicle - vehicle electrical systems .

In alternating current ( English alternating current , abbreviated AC ) there is a periodic change in the current direction . Each period consists of successive time spans with positive and negative instantaneous values, which add up to a mean current strength of zero. The decisive factor for the success of alternating current for energy transport was that the voltage can be changed very easily with the help of transformers . All public power supply networks are operated with alternating voltage - in Europe and many other countries with a mains frequency of 50 Hz, in other parts of the world 60 Hz, see country overview of plug types, mains voltages and frequencies . 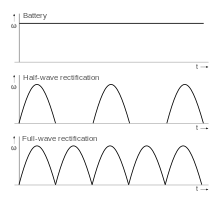 A combination of alternating current and direct current is called mixed current. This does not necessarily lead to a change in the direction of the mixed current, but rather the constant current component is periodically changed in its strength by the additionally applied alternating current (pulsating direct current). This mixed current occurs, for example, in rectifiers and is smoothed with smoothing capacitors or smoothing chokes in power supplies . The remaining (mostly undesirable) alternating component is referred to as residual ripple , which is coupled with a ripple voltage .

We speak of an impressed current if the current strength is independent of the value of the load resistance over a wide range . This can be direct current or alternating current of any frequency and waveform.

So-called laboratory power supplies have both an adjustable limitation of the output voltage and an adjustable limitation of the output current intensity and thus have a square-wave characteristic. Which of the two limits is reached depends on the size of the load. If, for example, the limits are set to 30 V and 1.0 A, the voltage limit is reached at a load resistance of over 30 Ω (up to no load). If the resistance changes within the specified range, only the current strength changes accordingly. The tension that remains unchanged from this is called the applied tension . With a load resistance of less than 30 Ω (up to a short circuit) the current limit is reached. If the resistance changes within the specified range, then only the voltage changes, which adjusts itself to values ​​below 30 V, while the current, which flows unchanged despite the change in load, represents an impressed current .

In everyday life and in the household, electricity is used to supply energy to numerous electronic , electrical and electromechanical devices and systems of all sizes, from wristwatches to elevators, for example. Typically, for small devices, it is supplied directly from a battery inserted into the device , and for large devices, it is supplied via the mains from an electricity company . In the industrialized countries, all of life is permeated with the acquisition and transformation of this form of energy.

The colloquial expression “consume electricity” is, like the term “ energy consumption ”, physically incorrect. Because of the charge retention , the exact current that flows into a device flows out again - provided that no electrical charges are stored in the device. Electricity consumption usually refers to the electrical energy converted by an electrical component, circuit or device , often calculated per time period, i.e. the electrical output .

Effects of electric current on humans

Damage caused by electrical current can result from the excitation of electrically stimulable structures in nerve and muscle tissue or from the consequences of the possible heat generation when exposed to current.

Although the current strength per area - i.e. the electrical current density  - and its duration of action are responsible for the effects of an electrical accident, the voltage is often given as a source of danger, since the current strength or current density in the body can be calculated using Ohm's law of body resistance . The path of the electric current (e.g. right hand - foot) is decisive for the danger of the voltage, with a shorter path such as chest - back, lower voltages can be life-threatening. In addition, the voltage level provides information about the required minimum distance to bare, uninsulated high-voltage lines.

However, these and the following values ​​only apply if the current is distributed in the body via the body resistance and not e.g. B. focused on the heart muscle ; Much lower values ​​apply to electrodes under the skin. In intensive medical interventions directly on the heart or heart muscle, significantly lower currents can also trigger ventricular fibrillation .

The following table shows the dangers of alternating current from 50-60 Hz:

In electrical energy supply networks and above all in areas and systems that are operated with high voltage , such as substations , overhead lines , but also overhead lines for railways, electrical accidents also occur due to voltage flashovers and arcs . Electricity accidents involving electric arcs are almost always also associated with burns , and the burn wound usually produces toxic combustion products.

Electrostatic discharge can injure or kill people. Especially during a thunderstorm there is a risk of being hit directly by lightning . The currents range from around 2 kA to over 100 kA. The discharge time is usually a few 100 μs. Due to the steepness of the flank of the lightning current, skin effects occur , the consequences of which can range from complete intactness to severe burns on the body surface with fatal consequences. Another effect is the occurrence of high contact voltages due to lightning strikes in the vicinity.

Beyond civilization, electric current occurs among others: