Connection with other quantities

Behaves consumers as ohmic resistance , the power can be by application of Ohm's law by express

the quantities voltage and current are time- dependent quantities and . A distinction must be made between several service terms:

If and are sinusoidal alternating quantities and of the same frequency, then it is also sinusoidal, but with twice the frequency and a constant component . The sizes are defined by averaging; for them there are no instantaneous values.

The real power is the arithmetic mean (if the quantity is continuously available the equivalent ) of the instantaneous power: 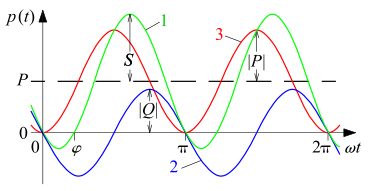 In the case of periodic processes, the period duration or, for statistical processes, a sufficiently long time (mathematically strict:)   .

The apparent power is formed from the effective values and , these are the root mean square values of voltage and current,

cause. The difference is made by the total reactive power

Measuring circuits and associated power meter are in active power and reactive power explained. Apparatus measuring devices for apparent power are not common. However, there are multifunctional transmitters that are also designed for this.

According to the definition above, there is no rms value of the power . The " RMS power " is a formal quantity in audio technology, but has nothing to do with the physical quantity "power".

The maximum power that an electrical energy source can transfer to a consumer is achieved with power adjustment. However, 50% of the power is lost in the source. Power supply devices and generators therefore usually do not work with power adjustment, but with voltage adjustment . Power adjustment is sometimes used for the transmission of information, since a signal source often only has a small amount of electrical power available.

Performance as a device identifier

To identify the output of a device ( electrical consumer , energy converter ), the nominal output is used, which can differ considerably from the actual output. It is specified like an active power.

What is important here is the type of power indicated on the nameplate. For motors, the available mechanical power is given, for lamps, vacuum cleaners or loudspeakers, on the other hand, the electrical power consumed. In the case of generators , such as bicycle dynamos or alternators , the electrical power output is indicated.

The power ratings of audio amplifiers or loudspeakers are difficult to interpret . In the case of audio amplifiers, the sinusoidal output , music output , RMS output or peak output ( PMPO ) is often given. The values ​​differ considerably, often have little practical relevance and generally prevent comparability.

In the case of tweeter or woofer speakers, the power rating often refers to the music performance of the entire frequency range - they never endure this electrical power in continuous operation.