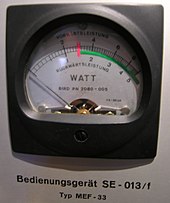 The watt is the unit of measurement used in the international system of units (SI) for power ( energy consumption per time period ). It was named after the Scottish scientist and engineer James Watt . The capital letter "W" is used as the unit symbol .

The watt is a derived unit . It can be derived from the basic units kilogram (kg) , meter (m) and second (s) :

As with any SI unit, decimal multiples can be specified using the SI prefixes ("Milli", "Kilo", "Mega" etc.).

One watt is equal to the power to

It should be noted that the different types of power as well as forms of energy cannot always be directly converted into one another.

The unit is named after James Watt, who is known for improving the efficiency of steam engines . It was proposed by the British Science Association in 1882 and recognized as a unit of achievement at its second congress in 1889. Compared to the previously common unit "ampere.volt", the new unit had a clearer relationship to mechanics, so that it was also accepted as a replacement for the unit PS (horse power) in electric motors . In 1946 the unit was redefined by the International Committee for Weights and Measures (CIPM). This resolution was confirmed by the ninth general conference on Weights and Measures in 1948 , and in 1960 the tidal flats were incorporated into the newly created International System of Units.

In electrical engineering, the watt is used exclusively to indicate the active power ; the following units are also used - especially in energy supply technology:

In the field of high-frequency and microwave technology , the signal and energy transmission shifts from the line structures to the electromagnetic fields that develop on the line structures , even with line-based transmission, with increasing frequency . Instead of current and voltage , calculations are made on the so-called “voltage level” with so-called “wave quantities” , which have the unit (“root watt”).