This article covers the unit of volume. For the Hungarian community see Litér , for the painter see Ernst Litter .

The (outside of Switzerland also: the) liter is a unit for the volume and is symbolized by the unit symbol , or or abbreviated as Ltr .

One liter corresponds to one cubic decimeter (dm³). A cube with an edge length of 10  cm therefore has a volume of one liter.

Although the liter does not belong to the International System of Units (SI), it is approved for use with the SI. The liter is a legal unit of measurement by national law .

The uppercase L was exceptionally approved by the CGPM as an alternative unit symbol for the liter in order to avoid confusion between the letter l and the number 1 , which can occur in some fonts, and is more commonly used in English and French-speaking countries. ISO and IEC only use the original symbol l . IUPAC and DIN  1301-1 allow both spellings.

Occasionally, a lowercase l in cursive (ℓ) is used to distinguish the unit symbol from the number 1 or the capital letter I. The associated Unicode code point for the “ℓ” is U + 2113. 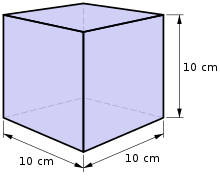 A cube with an edge length of 10 cm has a volume of one liter.

Common decimal parts and multiples of the liter are:

Even larger quantities of liquids (especially water) are given in cubic meters . 1 m³ corresponds to 1000 liters. For example, the Rhine in Basel has an average discharge rate of 1040 m³ / s.

In 1793, the liter was introduced in France as the new Republican unit of measurement (in connection with the metric system ) and equated to a cubic decimeter.

In 1879, the CIPM adopted the French liter definition and prescribed the use of the l (lowercase letter l) as a symbol.

Later, the definition was set to the water temperature of 4 ° C, which is not the temperature of the highest water density (actually around 3.98 ° C). Thus, pure water again had a slightly lower maximum density than 1,000 kg / l.

In 1979, at the 16th CGPM, the alternative symbol L (capital letter L) was approved for the liter , at the same time the wish was expressed to keep only one of the two symbols (lower case or upper case) in the future. Most recently in 1990 it could only be determined that it was still too early to make a decision.