The title of this article is ambiguous. Further meanings are listed under candela (disambiguation) .

The candela ( Latin for 'candle', stress on the second syllable: [ kanˈdeːla ]) is the SI unit of the SI base quantity “ light intensity ”.

A normal household candle has a light intensity of around 1 cd. Hence the name of the unit ( Latin candela , candle ). The name replaced the previously used name Neue Kerze in 1948 , which was finally abolished in 1967.

Connection to the watt

“The candela, unit symbol cd, is the SI unit of light intensity in a certain direction. It is defined by setting the numerical value 683 for the photometric radiation equivalent K cd of the monochromatic radiation of frequency 540 · 10 12 Hz, expressed in the unit lm W −1 , which is cd sr W −1 or cd sr kg −1 m −2 s 3 , where the kilogram, the meter and the second are defined by h , c and Δν Cs . "

This corresponds to the formula:

This definition was adopted in 1979 and has remained unchanged since then. Only the wording was adjusted in 2019 as part of the revision of the International System of Units . The mentioned frequency of 540 THz corresponds to green light with a wavelength of ≈ 555 nm.

Light is electromagnetic radiation that can be perceived by the human eye. However, the eye is differently sensitive to different wavelengths. In order to determine the light stimulus exerted on the eye by a given radiation, the radiation power must be multiplied by a wavelength-dependent conversion factor for each wavelength of the present wavelength mixture. In this way, the radiometric variable “radiant power”, measured in watts, results in the associated photometric variable “luminous flux”, measured in lumens. A radiant intensity measured in watts through steradian corresponds to a light intensity measured in lumens through steradian, i.e. candela. The course of the curve of the spectral perception of the human eye required for the conversion is established by standardization. The definition of the candela determines the scale factor for this curve by specifying the above numerical value for a point on the curve.

The definition indicates the frequency of the reference radiation, not its wavelength. In this way there is no need to specify a refractive index for the surrounding medium . 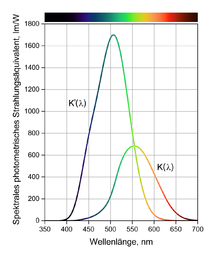 In air under normal conditions , the mentioned frequency of 540 · 10 12  Hertz corresponds to the wavelength 555 nm (green light). The human eye has the highest sensitivity during daytime vision at this wavelength . The sensitivity curves of the eye for day and night vision, K (λ) and K '(λ), coincidentally intersect in the immediate vicinity of this wavelength (namely at approx. 555.80 nm ). According to SI and DIN, the definition is therefore valid for daytime, twilight and night vision.

Candela as the base unit

The choice of the luminous intensity as the photometric base quantity and thus the candela as the base unit initially seems difficult to understand, since from a modern point of view the luminous flux would be viewed as a more fundamental quantity. In the early days of photometry, however, when the focus was on the visual comparison of light sources, the light intensity was the property of the sources that was easiest to compare and which was therefore introduced as the fundamental photometric quantity. The International Commission on Illumination spoke in formulating the new definition in 1979 advocated that the lumens should replace the candela as base unit. However, this was rejected because they feared too many changes. 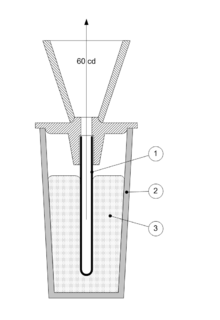 Cavity radiator for the realization of the candela up to 1979 (schematic). (1) tube made of high-melting thorium oxide as a cavity radiator; (2) Thorium Oxide Containers; (3) Solidifying platinum as a temperature reference

Originally, units of measurement for luminous intensity were defined using standardized reference light sources , such as the Hefner lamp . With their flames, a light source to be measured could be compared as brighter or less bright.

The candela was introduced in 1946 (before its ratification by the CGPM in 1948, it was called the "New Candle") and was defined as follows until 1979 (official German translation of the wording that has been in effect since 1967):

“The basic unit of 1 candela is the light intensity with 1/600 000 square meters of the surface of a blackbody at the temperature of the print 101 325 Newton shines through square meters of solidifying platinum perpendicular to its surface. "

This definition established a relationship between the radiometric radiant intensity and the corresponding photometric luminous intensity of a blackbody at a temperature of 2045 K. At this temperature the spectral radiance has its maximum at λ ≈ 1.4 µm, i.e. H. in the near infrared .

The experimental realization of this definition could only be achieved with great effort. It required platinum, which had a high degree of purity and maintained uniform temperature during the measurement, precise measurement of solid angles and the influence of the lens optics, as well as precise consideration of absorption by air and steam. Only a few laboratories had appropriate measuring equipment, and the results were only approx. 1% reproducible. An improvement in this situation was not expected. Radiometric measurements, i.e. direct measurements of the radiation power, on the other hand, could be carried out more and more precisely. Therefore, the new definition was made in 1979.

By choosing the mentioned frequency and the numerical value 683 lm / W for the photometric radiation equivalent at this frequency, the new definition from 1979 follows on from the previous definition. But it is no longer dependent on the difficult realization of a black body at a high temperature. In addition, by restricting itself to monochromatic radiation, it takes into account the modern possibilities for measuring optical radiation power and also traces the measurement task back to the much more fundamental case of monochromatic radiation. The new definition is also more general: it now allows, for example, the sensitivity curves of the eye to be measured directly , whereas previously they were implicitly part of the definition throughout their entire course. The previous definition only provided an exact photometric value for a special case with a complex broadband wavelength distribution.