The title of this article is ambiguous. Further meanings are listed under Meter (disambiguation) .

The meter is the basic unit of length in the International System of Units (SI) and in other metric systems of units . One meter is defined as the length of the distance that light travels in a vacuum over a period of 1/299 792 458 seconds . The unit symbol for the meter is the lowercase letter "m". The international prefixes for units of measurement are used for decimal multiples and parts of the meter .

The meter was defined in 1799 as the length of the original meter , a prototype made of platinum . According to the measurements carried out at that time, its length corresponded to ten millionth part of the distance from the North Pole to the equator . The current definition has been in force since 1983.

The meter is defined by the speed of light in vacuum c is a fixed value has been allocated and the second (s) is also a natural constant, the oscillation frequency .DELTA v Cs is defined .

This definition has been in force since 1983 (the current wording since 2019). 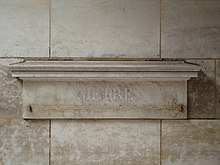 The meter as a unit of length has been in use since the end of the 18th century. The origin of this unit of length goes back to a decision by the French National Assembly to define a uniform measure of length. This was preceded by a number of suggestions for defining a unit of length that, unlike traditional length measures, was not derived from the length of human limbs ( finger width , inch , hand width , hand span , cubit , foot , crotch, and fathom ) . In 1668 , the Abbé Jean Picard suggested the second pendulum as the unit of length - i.e. the length of a pendulum that has half a period of one second. In the gravitational field of Europe, such a pendulum would have a length of about 0.994 m and would come pretty close to the current definition of the meter. 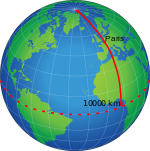 However, it was not the seconds pendulum that was decisive for the new unit of length, but the figure of the earth . In 1735 the Paris Academy of Sciences sent two expeditions to measure degrees in what is now Ecuador and Lapland to determine the exact dimensions of the earth. In 1793, the French National Convention set - in addition to a new calendar - a new measure of length: the meter should be the 10 millionth part of the earth quadrant on the meridian of Paris - that is, the ten millionth part of the distance from the North Pole via Paris to the equator . A prototype of this meter was cast in brass in 1795. 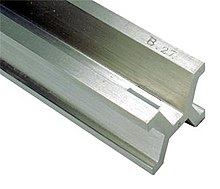 Copy number 27 of the original meter made of platinum-iridium, which was made in 1889. It was in use in the USA from 1893 to 1960 as a measuring standard for the unit of length meters.

Between 1792 and 1799 Delambre and Méchain redefined the length of the meridian arc between Dunkirk and Barcelona . A combination with the Ecuador-Lapland results resulted in a new value of 443.296 Paris lines, which was declared binding in 1799 and implemented as a platinum rod, the original meter. In the 19th century, however, more precise measurements of the earth came to the conclusion that the original meter was about 0.02% too short. Nevertheless, the meter defined in 1799 was retained - with the result that the earth meridian quadrant is not 10,000 km, but 10,001.966 km long. This length applies to the meridian of Paris, other meridians can have different lengths. A side effect was that it was recognized that the earth is not an exact ellipsoid of revolution, but has an irregular shape. The earth had thus proven to be unsuitable for defining the meter. Until 1960, the meter was therefore defined as the length of a specific object - first the original meter, then since 1889 the international meter prototype (see below). All later definitions aimed to match this length as closely as possible.

In 1889 the International Bureau of Weights and Measures (BIPM) introduced the International Meter Prototype as a prototype for the unit meter. It was a rod with a cross-shaped cross-section. As the material was a platinum iridium - alloy selected in the ratio 90:10. The length of the meter was determined as the distance between the middle lines of two groups of lines on the stick kept at a constant temperature of 0  ° C. 30 copies of this prototype were made and handed over to national calibration institutes. 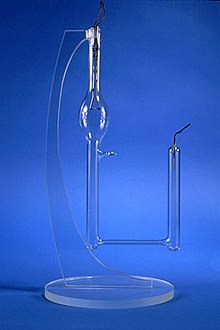 A Krypton-86 lamp whose vermilion spectral line (wavelength approx. 606 nm) was used between 1960 and 1983 to define the meter

Although great importance was attached to durability and immutability in the manufacture of the meter prototypes, it was clear that these are fundamentally impermanent. The making of copies inevitably led to deviations and - as well as regular comparisons of the copies with each other and with the original - the risk of damage.

As a remedy, Albert A. Michelson suggested at the beginning of the 20th century to define the meter based on the wavelength of spectral lines. In 1951 Ernst Engelhard and Wilhelm Kösters developed the Krypton-86 spectral lamp at the Physikalisch-Technische Bundesanstalt in Braunschweig , which produced orange-red light with the most stable and reproducible wavelength at the time and which exceeded the accuracy of the original meter. In 1960 the meter was officially redefined: One meter was now 1,650,763.73 times the wavelength of the radiation emitted by atoms of the nuclide 86 Kr during the transition from state 5d 5 to state 2p 10 and spreading in a vacuum . The numerical value was chosen so that the result corresponded to the meter valid until 1960 within the measurement uncertainty of that time. Understanding this definition only required knowledge of atomic physics . If this and the necessary equipment were available, the length of a meter could be reproduced at any location. The meter was the first basic unit that was based on a natural constant and that could be implemented independently of measuring standards and measuring regulations.

With the krypton lamp , the meter could be defined with an accuracy of 10 −8 . With the discovery of the laser, however, more and more stable light sources and measurement methods were developed in the following years. In particular, the speed of light could be determined with an accuracy of 1 m / s, and the definition of the meter became the limiting factor. For this reason, at the 15th General Conference on Weights and Measures (CGPM) in 1975, it was  recommended that the numerical value of the speed of light should no longer be measured, but that the unit of length should be defined using the speed of light. The 17th CGPM adopted this definition on October 20, 1983. The meter was defined as the distance that the light travels in a vacuum within the time interval of 1/299 792 458  seconds . With the redefinition of the SI in 2019 by the 26th General Conference on Weights and Measures, only the wording of the definition was adapted to that of the other SI base units.

The unit meter is used with various decimal multiples, which are designated with the respective SI prefixes , for example:

Compositions with additional prefixes are not used. In the past, the (non-SI conform) was myriameter(M yr ) in use, 1 M yr = 10 km, see Myriameter stone .

Relationship to other common units of length

Note: The "=" sign means an exact match that is defined by definition; the "≈" symbol indicates a rounded value.

Introduction of the metric system in Germany

The unit name meter was neuter (the meter) according to DIN 1301-1: 2002-10 , analogous to the original languages. With DIN 1301-1: 2010-10, however, masculine (the meter) was defined as the norm. With this, the technical language was adapted to the general usage, where masculine predominates. “The” meter, on the other hand, is used to mean a measuring instrument, for example: the thermometer .

When it comes to the question of whether meters are inflected after number and case, according to the Duden editorial team, the following cases can be distinguished:

Wikisource: Law concerning the modification of the order of measure and weight. 11 July 1884 (German Empire)  - Sources and full texts