As Gradmessung one is astronomical - geodetic method called from the 16th to the 20th century to measure the earth's shape was used (the earth ellipsoid). The name comes from the precise determination of the distance (110.6–111.7 km) that lies between two latitudes that differ by 1 ° .

The method is based on the measurement of the curvature of the earth between distant points by comparing their distance ( arc length  B) with the angle β between their astronomically determined plumb lines . The quotient B / β gives the mean radius of curvature of the earth between these points. It is best to choose these two locations for the vertical direction measurement in north-south direction, so that β corresponds to the difference in their geographical latitude . 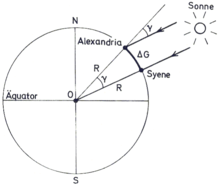 The principle of measuring degrees goes back to the Alexandrian mathematician and library director Eratosthenes ; he estimated the circumference of the earth to be around 240 BC. Chr. From different by 7.2 ° Sun between Alexandria and Syene (now Aswan). His result of 250,000 stadiums hit  the true value at around 10 percent , depending on the exact length of the stadium used .

The method was refined in the early Middle Ages by the Arabs under Al-Ma'mun to an accuracy of 1–2%. In France , in 1525 , Jean François Fernel (1497–1558) obtained a mean radius of the earth (approx. 6370 km) from an arc of meridian north of Paris, with an accuracy of a few kilometers, and determined the distance from the revolutions of the wheel of his carriage. The Dutchman Willebrord van Roijen Snell (Snellius) determined the distances for the first time in 1615 using the triangulation of large triangles. In 1670, Jean Picard was the first to determine the Paris - Amiens meridional arc by triangulation with quadrants that had telescopic sights with crosshair eyepieces to target the stars. This achieved a level of precision that was previously impossible.

The subsequent lengthening of this meridian arc to Dunkirk and Perpignan at the beginning of the 18th century suggested a locally varying curvature of the earth, i.e. deviations from the spherical shape. The controversial question of that time, whether the earth's curvature to the pole decreases or increases and the earth is flattened towards the pole or ovoid , was only clarified by the French earth measurements in Lapland and Peru.

In the 20th century there was a change from profile to area networks and the regional curvature of the earth was determined through various geoid studies and cross-border projects. Since the practicality of GNSS , many measurements no longer refer to the true shape of the earth ( geoid ), but to a mean earth ellipsoid - which of course results in problems with height measurement .

The results of these measurements (1735–1740) were intended to define a new international measure of length in addition to the earth's ellipsoid - with exactly 10,000,000 meters from the equator to the pole.

Various problems with rust and calibration of the scales used (see Toise ), however, led to ellipsoid radii being shortened by 1 km (today's data indicate the meridian quadrant at 10,002,249 meters).

Other important meridian arcs in the 18th – 20th centuries century

The degree measurement along meridians is easier to carry out because the astronomical work only requires latitude measurements . For precise continental projects, however, east-west profiles and measurements of geographical longitudes are also necessary - which, due to the need for precise time determinations, were only possible globally with radio time signals and precision chronometers : 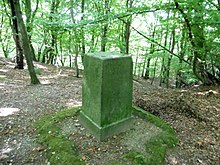 The Central European Degree Measurement Commission was founded in 1862 on a German-Austrian initiative for the international coordination of the major projects mentioned . Its long-time leader was the Prussian general Johann Jacob Baeyer . It was expanded in 1867 to the European degree measurement and represents the forerunner of the international geodetic union IAG (1919), as well as today's geoscientific union IUGG .

Since around 1910 and 1940, the profiles in the north-south and east-west directions have no longer been observed or evaluated separately, but increasingly linked to form large surveying networks. The computational effort of such large-scale area networks and their compensation calculation increases enormously (with the 2nd to 3rd power of the number of points), but it is worthwhile due to higher accuracy and homogeneity. The first of these major projects involved the USA and Western Europe; The first networking of Eastern and Western European land surveys goes back to the “ Third Reich ”.

Since the 1970s and the development of IT , these area networks have also been combined with 3D measurements from satellite geodesy . As a result, the classic term of "degree measurement" is incorporated into that of " earth measurement ".

In national surveys , the individual states defined their own “geodetic date” ( reference system ) up to around 1850 . With the international extension and networking of the above-mentioned degree measurement profiles, the possibility and the desire to base the individual areas on large-scale valid data developed. The result was a series of so-called reference ellipsoids , which, with increasing expansion, approached the "mean earth ellipsoid ".

Of the approximately 200 national surveying networks around the world, over 90% are now based on data from a dozen large-area ellipsoids, which increases their quality and facilitates international cooperation. The older of these ellipsoids are based on the large meridian arcs of the 2nd section, the newer ones arose from intercontinental and satellite networks. The most important of these ellipsoids are:

For many countries of Central Europe that is Bessel ellipsoid important also the ellipsoids of John Fillmore Hayford and Krasovsky and GPS survey the WGS 84 .

The pioneering work of Jean-Baptiste Joseph Delambre is based only on local measurements. On the other hand, the big difference between the ellipsoids of Everest (Asia) and Hayford (America) arises from the geologically determined geoid curvature of the two continents.

Wikisource: Projects for the expansion of the European degree measurement by Johann Jacob Baeyer (1870)  - sources and full texts