The Scandinavian-Russian meridian arc or Struve arc for short , named after the Baltic German astronomer Wilhelm von Struve (1793–1864), is a degree measurement that consists of a nearly 3000 km long network of geodetic survey points . The Struve-Bogen is one of the most precise and largest projects of the earth's surveying at the time , has been a UNESCO World Heritage Site since 2005 and is managed internationally under the leadership of the Fédération Internationale des Géomètres (International Association of Surveying Engineers, FIG). 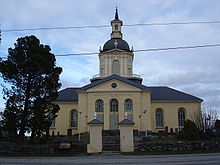 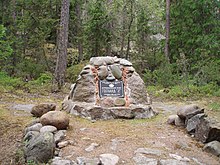 Measuring point on the island of Gogland (Russia)

There are only two measuring points in buildings:

The other points are obelisks, cairns and the like.

His double chain of points, stiffened by triangulation , was erected from 1816 to 1852 under the supervision of Struve and the Russian officer Carl Tenner (1783-1859) in order to precisely determine the figure of the earth (size, shape, flattening) in Northern and Eastern Europe. Both geodesics cooperated in the southern section. Further north (to the south point of Maupertuis ' degree measurement ) Friedrich Woldstedt , director of the Helsinki observatory , oversaw the surveying work, which - most recently under Swedish management and difficult conditions - extended to Fuglenes.

In addition to its importance for geodesy, the Struve Arch is also an early example of international scientific cooperation. Represented by 34 of its measuring points, it was therefore included in the list of the world cultural and natural heritage of mankind by the World Heritage Committee of UNESCO on July 15, 2005, making it the first scientific instrument on this list.

The following measuring points, which are part of the world cultural heritage, have been selected according to their importance. They are evenly distributed over the entire arch, represent all participating countries, correspond to the points originally used, are only marginally endangered and can be maintained by local institutions.

Course of the Struve Arch

Cultural heritage: St. Sophia Cathedral and Lavra Pechersk Pechersk Monastery in Kiev (1990) | Historic Center of Lviv  (1998) | Struve Arch  (2005) | Residence of the Orthodox Metropolitans of Bukovina and Dalmatia (today the central campus of the University in Chernivtsi) (2011) | Ancient city in the Tauride Chersonese and its Chora (2013) | Wooden Churches of the Carpathian Region in Poland and Ukraine  (2013)