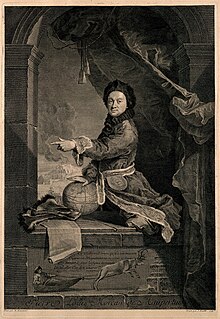 Pierre Louis Moreau de Maupertuis (born September 28, 1698 in Saint-Jouan-des-Guérets ( Saint-Malo ), † July 27, 1759 in Basel ) was a French mathematician , geodesist , astronomer , naturalist and philosopher who developed the principle of the smallest effect . Some of his writings appeared under the pseudonym Dr. Baumann .

He was the son of the naval officer, capitaine malouin and deputy at the Conseil royal de commerce René Moreau de Maupertuis (1664-1746), his mother was Jeanne-Eugénie Baudran (1672-1724).

Maupertuis attended the Collège de la Marche in Paris from 1714 , where he studied philosophy, returned to Saint-Malo in 1716 at the request of his mother, where he studied music from 1717 and aroused his interest in mathematics . At the age of 20, Maupertuis joined the army in Lille as a musketeer lieutenant and later became a cavalry captain and served there for five years. In his free time he studied mathematics. In 1722 he went to Paris and joined intellectual circles, among other things he was friends with Marivaux .

In 1723, at the age of 25, he was admitted to the French Académie des Sciences and later, in 1725, a full member of this Paris Academy of Sciences. During these years he received his doctorate there with the work Sur la forme des instruments de musique (1724) accepted by the academy in 1723 . In his first work he dealt with the relationship between musical acoustics and the shape of the instruments. He published on mathematics and biology (for example the salamander ). In 1728 he traveled to London and was elected a member of the Royal Society there. In 1729/30 he was in Basel, where he studied with one of the then leading continental European mathematicians, Johann I Bernoulli . In particular, he studied Isaac Newton's Principia and his theory of gravity . He became a fierce proponent of this theory, which at the time was largely skeptical in favor of Descartes' theory as an apparently inexplicable theory of action at a distance on the continent (also by the Bernoullis) . Among other things, it was believed in France that a shape of the earth that contradicted Newton's theory could be derived from the measurement of the land - an extension towards the poles instead of, as Newton predicted, a flattening. To check this, geodetic measurements in more distant areas were necessary.

In 1736 he leads an expedition on behalf of King Louis XV. to Lapland to measure the distance between two degrees of latitude . At the same time as a second group in today's Ecuador ( Pierre Bouguer , Charles Marie de La Condamine , Louis Godin ), a precise measurement of the degree of a long meridian arc was to be made in order to determine its size and shape from the differences in the earth's radius of curvature . The measurements of both groups confirmed the Newtonian theory of polar flattening. Maupertuis was so proud of his scientific achievements under the difficult conditions that he often wore the costume of the rag from then on.

In 1740 Frederick the Great invited him to Berlin on the recommendation of Voltaire to transfer the leadership of the Prussian Academy of Sciences to him. However, since Friedrich was busy with military questions, Maupertuis accompanied him and was taken prisoner by Austria during the Battle of Mollwitz , was brought to Vienna, where, however, treated kindly and soon released on Maria Theresa's instructions . He first returned to Berlin, but in June 1741 he returned to Paris to await the end of the Second Silesian War .

He was initially deputy director of the Académie des Sciences , and its director the following year. On June 27, 1743 he was accepted into the Académie française . In the autumn of 1744 Maupertuis traveled to Basel, then back to Berlin, where he was pressured by Friedrich to head his academy. There he married Eleonore von Borcke, a relative of the State Chancellor and daughter of General Friedrich Wilhelm von Borcke and Freiin Margarete von Mardefeld, on August 25, 1745 .

On May 12, 1746, Maupertuis was officially appointed President of the Berlin Academy. In 1748 he obtained asylum from the king for the doctor and philosopher Julien Offray de La Mettrie , persecuted in France and the Netherlands , who had published radical atheist writings; Friedrich made him his reader in Sanssouci and a member of the academy. 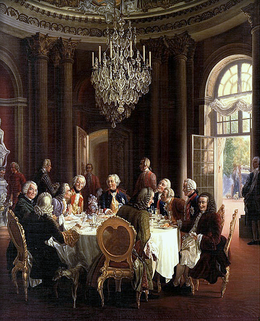 Maupertuis soon got into various quarrels, among other things because he could hardly speak German. One of the quarrels was triggered by Johann Samuel König , who had translated Maupertuis' work on Lapland. He accused Maupertuis that the “ principle of the smallest effect ” formulated by him in his Essai de cosmologie 1750 came from Leibniz . When the Academy President clumsily denied this, he was attacked by Voltaire , who had lived in Berlin and Potsdam since July 1750 and was a member of the Academy headed by Maupertuis, with the anonymously published pamphlet Diatribe du Docteur Akakia . Frederick II stayed with Maupertuis and in 1750 awarded him the Prussian order Pour le Mérite , which was only donated for military service and was very rarely given to civilians. In 1752, the academy, headed by Maupertuis, declared Leibniz's letter apocryphal and called Johann Samuel the king of forgery. When Maupertuis published Lettres sur des sujets divers in the same year , some of the crude ideas it contained sparked general ridicule, in which Friedrich also took part with a pamphlet. Voltaire and Maupertuis competed every evening at the king's round table for his favor, which degenerated into a sharp rivalry. In September 1752 Voltaire anonymously published the Réponse d'un académien de Berlin à un académien de Paris , in which he accused Maupertuis of tyrannizing and dishonoring the academy. Friedrich now took up pen himself and defended his academy president. He promised Voltaire not to have the Akakia reprinted and not to write anything else against Maupertuis. Voltaire had already drawn the king's displeasure in 1751 when he got caught up in a fraud case with the Berlin protection Jew Hirschel. In 1752 Voltaire had a second edition of Akakia secretly printed in Leipzig, which Friedrich had the Berlin hangman burn in public in December 1752 in a car café . Voltaire sent him the chamberlain key and his medals back in January 1753 and left for Saxony at the end of March, ostensibly for a cure and with the promise to come back, which he did not. In Leipzig he published two more brochures against Maupertuis and a letter from Maupertuis, which he had distorted by making a "small correction" to a threatening letter. In April the king wrote him an angry letter. Maupertuis resigned as President of the Academy in the summer of 1753 and traveled to Paris, succeeded by the Marquis d'Argens . Friedrich wrote to Maupertuis: “I assume that you are quite happy now, far from the bickering and the Akakias ... What a fuss a fool can cause in a society! I hate to miss the spirit of mine; but his character comforts me for his loss ”. Maupertuis returned to Berlin in the autumn.

In 1756 Maupertuis moved to Basel. There he died in 1759 in the house of Johann II Bernoulli Da Maupertuis wished that he would be buried as a Catholic according to the rites of his denomination in the Catholic canton of Solothurn , which borders the Reformed canton of Basel, his grave is in the St. Mauritius Church in Dornach .

On Friedrich's equestrian monument from 1851, Maupertuis is mentioned as an important scientist who managed to organize the Prussian Academy to the satisfaction of the ruler.

His difficult character, which u. a. is attributed to his upbringing and the pampering of his mother, who is said to have loved her son less than idolized, led to numerous arguments during his life.

Maupertuis was not only a mathematician and a good expert on the theories of Newton and Leibniz, he also knew that Newton's theories were insufficient to explain biological phenomena. In this sense he was one of the most advanced thinkers of his time, who spoke out not only against preformism and Newtonian determinism , but also against creationism . For this reason he included Leibniz's ideas in his conceptual construct. Through him and Émilie du Châtelet , Georges-Louis Leclerc de Buffon was also inspired by Leibniz's ideas.

On the occasion of the exhibition of a " white negro " his interest in his future favorite area arose: inheritance and especially the inheritance of mutations; he became one of the forefathers of modern genetics . For him the world was too different and too heterogeneous to have emerged from a planned creation.

One does not know whether he was a believer - that is, believed in a God who did not intervene directly in the processes of nature, but in a God who created the laws of nature - or whether he was an atheist . With his more materialistic attitude, supported by his knowledge of Newtonian theories, and his interest in heredity, he developed a theory of the origin of life similar to that of Hugo de Vries' mutationism . He assumed that the first living beings came into being through spontaneous generation from accidentally come together dead materials, molecules or germs; Ideas that were already represented by ancient writers like Lucretius . The invention of the microscope allowed the perception of the smallest, previously unknown organisms that blurred the boundaries between living and dead matter and gave reason for assuming that life was spontaneously created from random combinations of dead matter. For a long time it was believed that microscopic organisms, especially infusion animals , could be created from dead matter. Maupertuis assumed that, starting from these organisms that were created by spontaneous creation, new species developed through strong “mutations”. These mutations and crossings between the species would explain the observable great diversity of the species over time. Similarly, he explained the elimination of defective mutations. The elimination of defective variants is not to be equated with the term “ natural selection ”, and the term genetic mutation also covers a different frame of reference.

In his Systeme de la nature ou Essai sur les corps organisés (initially in Latin in 1751 as Dissertatio inauguralis metaphysica de universali naturae systemate , published under the pseudonym Dr. Baumann) he further developed Leibniz's theory of monads in natural philosophy by assuming that the molecules already have a higher level, "spiritual" properties. Based on the analysis of a family in Berlin who exhibited polydactyly over several generations, Maupertuis developed a mathematical model in Systeme de la nature which, on the basis of an extremely low probability of the phenomenon, ruled out that polydactyly alone occurs by chance in a family over three generations. The trait had to be inheritable ( Pierre-Louis Moreau de Maupertuis - Mathematical Study on the Inheritance of Polydactyly ).

Maupertuis was an essentialist in the sense that he put every species that differed from their neighbors on the taxonomic map. Though he assumed the creation of new traits, he could not envision a gradual adaptation of the species by selecting the most adapted members of that species. 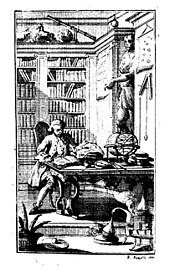 His most important works include: