The seat of the Académie française in Paris

The Académie française (German "French Academy") is a French learned society based in Paris . It is one of the oldest and most prestigious institutions in the intellectual life of France.

The goal of this 1635 under Louis XIII. The society founded at the instigation of the French minister and cardinal Richelieu , whose 40 members called for life call themselves the “immortals”, is the “standardization and maintenance of the French language”. Since 1801 (or 1805) it has been meeting at the Collège des Quatre-Nations ("College of the Four Nations"), which is opposite the Louvre on the other side of the Seine ( 6th arrondissement ). This also houses the headquarters of the Institut de France , the umbrella organization of the French state academies and the official residence of the Secrétaire perpétuel, elected for life .

The official task of the Académie was and is the “standardization and maintenance of the French language”, in particular through the development of a normative dictionary and other reference works (grammar, rhetoric, poetics). In addition, it should “ cultivate patronage ”.

The first edition of the Dictionnaire de l'Académie , begun in 1637, appeared from 1694; others followed in 1718, 1740, 1762, 1798, 1835, 1878, 1932–1935 and 1992. The ninth edition is in preparation. Since the project largely ignored colloquial language and technical language, and therefore only incompletely represented the use of French, Antoine Furetière , who had been involved in the project since 1662, announced an alternative work as early as 1684 , but its publication in France was prevented - despite the privilege already granted. Furetière's three-volume work was published posthumously in 1690 in Holland.

The Académie manages assets from private foundations . In particular, it uses the income to finance various prizes, which it awards every year. These include around 60 literary prizes, but since 1986 also the Grand Prix de la Francophonie de l'Académie Française , which testifies to the interest of the Académie in spreading the French language around the world.

The Academy also supports literary circles , charitable purposes, large families , widows , poor and volunteer work and issues beyond a certain number of scholarships (the Zellidja- that Neveux- that Corblin- and DAMADE scholarship).

The revisions of the Dictionnaire de l'Académie , which had been published since the 19th century , especially the 1932 edition, became increasingly conservative. The planned works on poetics and rhetoric were never published, and the grammar did not appear until 1932, as the Académie had previously considered the remarques of its secretary Claude Favre de Vaugelas to be its own grammar, i.e. it did not want to write any more.

In the opinion of some critics, the opinions published by the Académie or some of its members on grammatical problems and on the role of French as a world language also show limited insight into the functioning and development of language. 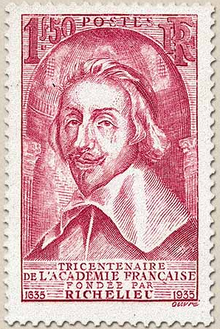 See also : List of members of the Académie française

The number of members was set at 34 by Richelieu in 1634, increased somewhat in 1639 and is now 40 permanent members appointed for life. Since the Académie was founded , more than 700 people have taken their seats on the coveted armchairs (“armchairs”). The Académiciens (a word that only refers to them and not, as in Germany, to students in general) received their nickname les immortels ("the immortals" ) in allusion to the inscription À l'immortalité! (“To immortality!”) In the seal awarded by Richelieu. It is not uncommon for the term to be used ironically (with all due respect) in view of the high mortality rate of the often elderly men and women.

Membership in the Académie has been considered the most honorable culmination of an intellectual career in France for three and a half centuries; in the Ancien Régime (i.e. before the revolution of 1789 ) it gave non-aristocratic members a quasi-aristocratic status. Accordingly, the filling of a vacant seat was and is a social event of great interest, which is accompanied by speculation, intrigues and pressure.

In general, people who have made a name for themselves or as poets , writers or philosophers are suggested for inclusion , but members of completely different professions can also be found among the members, such as B. actors , scientists , publicists , high-ranking military , politicians or clergy . Membership is granted for life and cannot be abandoned (in any case, the seat of the Académiciens who have declared their resignation will not be refilled until their death, as happened for example with Pierre Emmanuel and Julien Green ). A member can be expelled in cases of serious violations of honor. Such exclusions were very rare, but were pronounced for collaboration (working together with the enemy), for example, after the Second World War . They punished Charles Maurras , Abel Bonnard , Abel Hermant and Marshal Pétain .

After the death of a member, a successor (who previously had to be confirmed by the king) is elected in an assembly. He has the duty to give an eulogy for the deceased member whose seat he is taking. The writer Marguerite Yourcenar was the first woman to join the academy in 1980 after receiving the Academy's literary prize in 1977. She was followed by Jacqueline Worms de Romilly (1988), Hélène Carrère d'Encausse (1990), Florence Delay (2000), Assia Djebar (2005), Simone Veil (2010), Danièle Sallenave (2011), Dominique Bona (2013) and Barbara Cassin in 2018.

Ever since the Querelle des Anciens et des Modernes in the 1680s, there have been repeated power struggles between traditionalists and innovators, which often come out in favor of the former. This is why French intellectuals regularly accuse the Academy of paralysis and vain self-examination, pointing out that many pioneering authors (e.g. Denis Diderot , Jean-Jacques Rousseau , Choderlos de Laclos , Honoré de Balzac , Gustave Flaubert , Charles Baudelaire , Émile Zola , Jean-Paul Sartre or Albert Camus ) were not included or not even considered.

The Académie française emerged from a Parisian literary circle that had met with the now little-known author Valentin Conrart since 1629 - and to which Godeau , Chapelain , de Gombauld , de Malleville and Giry belonged - and in 1634 by the ruling minister Cardinal de Richelieu increased to 34 members and on January 29, 1635 by Louis XIII. was elevated to a state institution. The statutes and regulations envisaged by Richelieu were registered in 1637 by the Paris Supreme Court, the Parlement , and thus became legally binding. After the death of Cardinal de Richelieu († 1642) the patronage was taken over by the chancellor and “keeper of the seals” Pierre Séguier , then by Louis XIV. And since then by all kings, emperors and heads of state of France.

The literary circle initially held its meetings in secret with one of its members, and the members exchanged their thoughts on art, literature and science. Through an indiscretion by the clergyman de Boisrobert , who was close to Cardinal Richelieu, this secret circle became known to the Cardinal. In 1634 Richelieu asked the members whether they would like to continue their meetings under the protection and support of the government. After an affirmative answer, they received a royal edict on January 29, 1635 , which the society set up as an academy called the Académie française . The circle, which originally consisted of 10 people, grew to 40 by 1637 through multiple admissions, including those of Jean-Louis Guez de Balzac , Vaugelas and Voiture . From 1639 on they met in the city palace of Chancellor Séguier in rue de Grenelle Saint-Honoré (since 1791 rue Jean-Jacques Rousseau ), from 1672 in the Louvre , and from 1805 until today in the Collège des Quatre-Nations (“Kolleg der four nations ").

During its three hundred and fifty years of existence, the Académie managed to largely preserve its character, with the exception of an interruption during the Revolution, when it was initially banned by the National Convention on August 8, 1793 like all academies and in October 1795 it became a simple subdivision ("class" ) of the newly founded Institut national des sciences et des arts , a forerunner of the current Institut de France, created in 1796 . It was not until 1816 that it became independent again in roughly the old form and under the old name.

The “permanent secretary” ( secrétaire perpétuel , managing director) is “the soul of the academy”. He is elected in the presence of at least 20 members from the circle of the academy and serves for life (unless he resigns). So far the academy had 31 secretaries: