The National Convention ( French Convention nationale ) was the constitutional and legislative parliamentary assembly during the French Revolution , which met from September 20, 1792 to October 26, 1795 (the 4th Brumaire of the year IV).

La Convention Nationale (The National Convention) by François Sicard , on the base the inscription: Vivre libre ou mourir “Live free or die” (in the apse of the Panthéon in Paris)

On August 10, 1792, when the Parisian masses stormed the Tuileries ( Tuileries Tower ) and called for the abolition of the monarchy, the Legislative Assembly ordered the temporary suspension of the king and the convening of a national convention to draft a constitution . 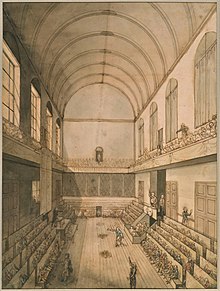 At the same time it was decided that the members of this convention would be elected by all French men over the age of 21 who had been resident for more than a year and made a living from their work. The National Convention was therefore the first French assembly to be elected by an electoral law without class distinctions. The minimum age for the right to vote was further reduced to 21 years, while from now on it was possible to take up the right to stand as a candidate from the age of 25.

The first session was on September 20, 1792. The next day kingship was abolished. On the 22nd it was decided that in future all documents would be dated with an annual count beginning with the year I of the French Republic. In this regard - according to a decision of the National Convention of October 1793, which came into force on the 4th Frimaire II (November 24th 1793) - retrospectively to the 1st Vendemière of the year I (September 22nd 1792) with the intention of bringing about the irreversible revolution to provide a new calendar, also introduced a new calendar ( French revolutionary calendar ) with new month names. The convention, which had been in session since September 20, 1792, was to be effective for three years. The country was at war and it seemed best to postpone the new constitution until after a peace agreement. At the same time as his power of attorney was extended, he also considerably expanded his powers in order to be able to meet the urgent dangers that threatened the republic. Although it was a legislative assembly, it took executive power and entrusted it to its own members. This blending of powers, which opposed the philosophical theories - especially those of Montesquieu - that had initially inspired the revolution, was one of the essential characteristics of the Convention. The series of extraordinary measures that brought about the merging of powers established the Revolutionary Government in the true sense of the word, a government that was in force primarily during the reign of terror . It is therefore necessary in the work of the Convention to distinguish between temporary makeshift remedies and measures intended as permanent.

The convention, which held its first session in a room in the Tuileries, met, like the constituent and legislative assemblies, in the nearby arena . Finally, on May 10, 1793, he moved to a huge hall in the Théâtre des Tuileries ( Spectacles ), in which the delegates were only loosely scattered. This last room had stands for the public, which, like the so-called Tricoteuses de Robespierre, often interrupted the debates with applause and shouts. The total number of MPs was 749, not counting 33 from the colonies, only a part of which appeared in Paris. Apart from these, however, the departments annexed between 1792 and 1795 were also entitled to send delegations. Many of the original MPs died or were banished during the session, but not all of their seats were replaced. Some of those ostracized during the Terror returned after the 9th Thermidor. Eventually, many members were sent to the départements or the army, with missions that sometimes took considerable time. For all these reasons, it is difficult to say the number of Members who were present at any given time, as roll-call votes were rare. During the terror, the average number of people who voted was only 250. The members of the convention came from all walks of life, but the largest number were lawyers. 75 members sat in the constituent assembly, 183 in the legislative assembly.

According to its own resolution, the Convention elected its President every two weeks. He was eligible for re-election after two weeks. Sessions were usually held in the morning, but there were also often evening sessions, often late into the night. In exceptional circumstances the Convention sometimes declared itself permanent and met for several days without interruption. For both legislative and administrative purposes the Convention used committees, the powers of which were to a greater or lesser extent extended or curtailed by successive laws. The most important of these committees were the Comité de salut public ( welfare committee ), the Comité de sûreté générale (security committee) and the Comité de l'instruction .

The efforts of the Convention in all areas of public affairs have been immense. To appreciate them without prejudice, it should be remembered that the Assembly protected France from civil war and invasion, that it protected the system of public education (Museum, École Polytechnique, École Normale Supérieure, École des Langues orientales, Conservatoire ) that it created institutions of paramount importance, such as the Grand Livre de la Dette publique, and that it established the social and political gains of the revolution.

Composition of the National Assemblies

National Convention September 20, 1792 (approx. 750 at the meeting, but the number is constantly changing)