Panthéon from the Eiffel Tower

La Convention Nationale 'The National Convention' by François Sicard , on the base the inscription: Vivre libre ou mourir 'Live free or die' (in the apse) 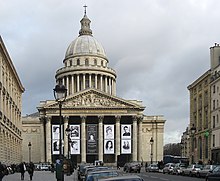 The Panthéon, photographed from Rue Soufflot

The Panthéon ( ancient Greek παν pan , German 'everything' and θεός theós , German 'God' ) on the hill of St. Genoveva in Paris ( 5th arrondissement ) is France's national hall of fame and the tomb of famous French personalities.

The building was planned as the church of the mighty Sainte-Geneviève Abbey , on behalf of King Louis XV. Erected between 1764 and 1790 by the architect Jacques-Germain Soufflot (1713–1780) and his students, but after completion it was rededicated by the leaders of the revolution and declared a secular memorial.

Church and Canons of St. Genoveva

Since the 5th century, the first church with the patronage of the apostles Peter and Paul , in the Genoveva of Paris († around 502), the patron saint of the city, but also the Merovingian king Clovis I († 511) and his second wife Chrodechild were buried. In the 9th century the Apostle Church was renamed Sainte-Geneviève .

In 1148 Suger von Saint-Denis founded a convent of the Augustinian Canons of Saint Victor near Sainte-Geneviève . Around 1180 the old church was replaced by a new collegiate church , which later fell into disrepair and was finally demolished.

In the 17th century - since 1634, Sainte-Geneviève was the motherhouse for all regular canon monasteries in France - the Genovevian canons (French: Génovévains ) planned to replace their modest Gothic-style church with a new one in the style of the new era of Louis XIV . They wanted on the one hand to impressively demonstrate the wealth and power of their congregation and on the other hand to create a more appropriate place of worship for the patron saint of Paris. In 1675, Claude Perrault , the architect of the east colonnade of the Palais du Louvre , proposed the construction of a church in the style of a Roman basilica , but this was rejected.

Another 70 years passed before the final decision on a new church was made. In 1744, building a new church came again into the realm of possibility. When King Louis XV. was seriously ill in Metz , he vowed, in case of his recovery, to have a church built on the summit of Montagne Sainte-Geneviève according to the wishes of the Genovevians. The financing of the royal construction site was secured for a further ten years, among other things through an increase in the lottery tax. The architect of the hitherto largely unknown was Jacques-Germain Soufflot determines the hitherto most for his work on the facade of the hospital (Hôtel-Dieu) of Lyon had noticed. However, in the Marquis de Marigny , the general director of the royal buildings and brother of Madame de Pompadour , the king's mistress, he had a high-ranking sponsor.

In December 1757 the king approved Soufflot's model of a huge church in the shape of a Greek cross . The floor plan of the new church was therefore very reminiscent of Byzantine or Syrian church buildings. The work on the foundation walls began immediately, but because of the many old pits built for the extraction of clay, some of which crossed the hill of St. Genoveva in ancient times, it lasted almost three years. A crypt was built over the pillars of the foundation , which takes up the area of ​​the entire church.

The builder Soufflot ushered in a new era with it. He admired the grandeur of the Gothic cathedrals, but at the same time also admired the Roman classic and its resurgence in European classicism . For him this meant that he absolutely wanted to build a domed church with a Greco-Roman temple facade and a large dome over a column-adorned drum - just like Michelangelo had done at St. Peter's Basilica in Rome. The exterior structure revived the forms of Roman antiquity.

On September 6, 1764, Louis XV. the foundation stone of the church he founded. Another 25 years passed before the church was completed. When the lantern was placed on the dome in 1790 and the work was thus completed, the new era had already overtaken the original plans of the Augustinians, the King and Soufflots.

The Pantheon in Rome is the model for this church in Paris and also for many churches from the Renaissance and Baroque periods . This only preserved antique dome building was also eponymous for the Paris church.

Soufflot died in 1780 without starting the dome. There is a rumor that he died of a “broken heart” because the building, with which his name went down in architectural history, threatened to crumble due to numerous structural defects. The church was completed by his students Maximilien Brébion and Jean-Baptiste Rondelet , who completed it in 1790. Above all, Rondelet should be mentioned, who invented the reinforced concrete beam to enable the construction of the large facade. In order to realize this new architectural idea, new techniques were necessary. 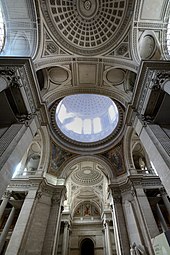 Interior of the Panthéon

In the interior, Soufflot was inspired by Gothic cathedrals by replacing the heavy pillars of classical art with the elegance of slender columns and ribbed vaults, i.e. with elements of Gothic construction. In addition, each of the four cross arms is surrounded by side aisles - as in the Gothic cathedrals. Many details of the original concept were changed by the revolutionaries who, for example, bricked up many of the side windows.

Shortly after its completion, the imposing domed building was declared a national hall of fame by the leaders of the French Revolution and thus profaned . Important personalities in French history should be immortalized here. This was to be done by means of monuments, but it was also planned to bury the remains of important French people in graves of honor in the basement of the building. Under the entire floor of the former house of God there is no crypt in the usual sense, but a huge corridor system with numerous chapels, in each of which certain historical persons are honored, similar to how the saints were venerated in the Christian churches.

Illuster is the list of people buried here. The first Frenchman whose body was solemnly buried in the Panthéon was the revolutionary leader Mirabeau in 1791 . However, his body was removed from the national sanctuary in 1793 when he was again disgraced. On July 11, 1791, Voltaire's bones were transferred to the Panthéon, which are still there today. 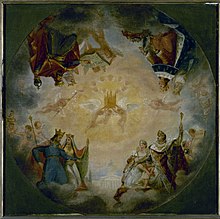 Also in 1791, the architect Quatremére de Quincy was commissioned to adapt the building to its new role as the national pantheon. Since then, the former church has been one of the most important immediate buildings of the so-called revolutionary architecture . 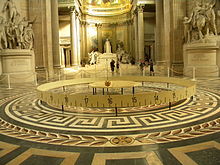 The Foucault pendulum in the Panthéon

On March 26, 1851, the physicist Léon Foucault succeeded in empirically demonstrating the rotation of the earth with the pendulum named after him in the Panthéon .

During the 19th century the Panthéon was rededicated twice: first from the secular hall of fame back to a church consecrated to St. Genoveva, and again in 1885 from a church to the national hall of fame of the French. The trigger for the last rededication was the death of Victor Hugo , who, after a brief but passionate debate under pressure from public opinion, was finally given a grave of honor in the crypt of the Soufflot building.

The first woman to be buried in 1907 was Sophie Berthelot , the wife of the chemist and politician Marcelin Berthelot . The family of the deceased had agreed to the transfer of Marcelin Berthelot's remains to the Panthéon only on condition that Madame Berthelot continued to rest in a grave with her husband. The first woman to be buried in the Panthéon in recognition of her own accomplishments was Marie Curie . Since then, this honor has been bestowed on three other women: the Résistantes Geneviève de Gaulle-Anthonioz and Germaine Tillion, as well as Simone Veil . The dancer and resistance fighter Josephine Baker should also be accepted according to a resolution from August 2021.

In autumn 2007, the Panthéon came into the spotlight of the media internationally when it became known that the underground organization les UX had repaired the defective watch in a secret operation.

The Panthéon as a burial place

The burial chamber of Alexandre Dumas , Victor Hugo and Émile Zola in the Pantheon

Voltaire's statue in the crypt of the Panthéon in Paris

The Panthéonisation is still an important process in the French cultural policy. Proposals for the admission of a person to the Panthéon are made by the National Assembly . The final decision on this can only be made by the French President .

In contrast, the following personalities are not (no longer) buried in the Panthéon:

Count von Mirabeau was the first to be buried in the Hall of Fame of the French Republic, even with a state funeral. However, after his ties to the royal family became known, his remains were removed from the Panthéon in 1793 or 1794. The Jacobin leader Jean-Paul Marat suffered the same fate . His remains were removed from the place of worship just a few months after they were transferred to the Panthéon on September 21, 1794 (other sources cite November 25, 1794).

Napoleon Bonaparte and Charles de Gaulle were not transferred to the Panthéon . Napoléon rests in the Invalides ( Dôme des Invalides ), de Gaulle in the cemetery of Colombey-les-Deux-Églises , where he owned a country house.