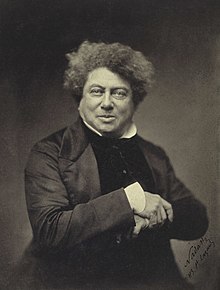 Alexandre Dumas the Elder (also Alexandre Dumas Davy de la Pailleterie or Alexandre Dumas père; * July 24, 1802 in Villers-Cotterêts , Département Aisne ; † December 5, 1870 in Puys near Dieppe , Département Seine-Maritime ) was a French writer . Today he is best known for his history novels, such as The Three Musketeers and The Count of Monte Christo, which have become classics .

Dumas was the grandson of the Marquis Alexandre Davy de la Pailleterie, who around 1760 stayed for a long time with a younger brother who owned a plantation on Saint-Domingue (today Haiti ). There he fathered four children with the black slave Marie-Césette Dumas. Around 1775 mother and children were pawned as slaves. Davy de la Pailleterie returned to France. A little later he released the youngest child, Thomas Alexandre (* 1762), brought the boy to France and adopted him as a legitimate son.

In 1786 Thomas Alexandre fell out with his father shortly before his death. He entered the army as a simple dragoons under the name of Thomas Alexandre Dumas . During a long stay of his regiment in Villers-Cotterêts, he met the innkeeper, Marie Labouret, whom he married in 1792. In numerous wars in the following years he rose to general. During the Egyptian campaign , he fell out of favor with Napoleon and was captured in the enemy kingdom of Naples while attempting to return to France early . After his release, he soon became the father of a boy, Alexandre Dumas.

In 1812 the mother succeeded in having her ten-year-old son's title of nobility confirmed. He hardly seems to have used it himself.

Today there are only a few descendants of Dumas, including in the United States and Germany .

Dumas did not receive a good school education; rather, at the age of 14 he had to accept the position of clerk at a notary. However, he discovered his talent as a writer at an early age and tried his hand at writing a play with a friend. In 1822 he went to Paris , where his beautiful handwriting (which was a capital at the time) and the mediation of a colleague of his father's general gave him a post in the office of the Duc d'Orléans, who later became the “citizen king” Louis-Philippe . In 1824 he became the father of an illegitimate son: the later author Alexandre Dumas the Younger . In 1825 he earned his first fee as a co-author of a play, in 1826 he participated in the writing of a vaudeville that was also listed . In addition, he worked as a poet and journalist. At least since 1828 he had access to the salon of the author Charles Nodier , where he met the first generation of romantics , including Victor Hugo . A first historical play about Queen Christine of Sweden was accepted in 1828, but not performed.

Dumas became suddenly known in 1829 for his romantic drama Henri III et sa cour ( Heinrich III. And his court). This was followed by numerous other pieces, which he wrote more and more in collaboration with others, for example in 1837 and 1839 with Gérard de Nerval . The plays Antony (1831), which revolves around the familiar scandalous subject of adultery, and the successful Kean, ou Désordre et génie (Kean or Disorder and Genius, 1836), in which Dumas takes on the role of the famous English actor Edmund Kean, were more autobiographical projected ( reworked by Jean-Paul Sartre 1953). His greatest stage success was Mademoiselle de Belle-Isle in 1839 , which was performed over 400 times by 1844.

In 1830 Dumas was actively involved in the July Revolution . As early as 1832, however, he distanced himself from his former protector, King Louis-Philippe . This did not prevent him from demonstrating his new status as a successful author with a party for his Parisian literary colleagues in 1833. In 1835 he had begun to try his hand at narration in the fashionable genre of novels. In 1838 he met the young, now less well-known author Auguste Maquet (1813–1888), with whom he focused on novels. He became really popular after 1840, when he began to produce exciting adventure novels (approx. 600 volumes in total) first with Maquet and more and more in series production with additional employees , which as a rule first appeared as feature novels before being printed and published as books partly adapted for the stage (and filmed in the 20th century).

In addition, Dumas pursued a wide range of political, entrepreneurial and private activities, so that despite his considerable income he often got into debt, which he tried in part to evade through longer stays abroad, including 1851–53 in Belgium , 1858/59 in Russia or 1860– 64 in Italy , where he moved around Giuseppe Garibaldi . In turn, he used to process his travels in travel reports, which were popular with the press and publishers at the time, which he then also published in book form. He also marketed his eventful life, namely in the multi-volume Mémoires (published in Brussels 1852–54).

In 2002, on the two hundredth anniversary of his birth, his bones were transferred to the Paris Pantheon . The honor was understood as a political signal against racism, because Dumas was often reviled during his lifetime because of his dark skin color and his origins.

A hallmark of Dumas' novels are fictional or pseudo-historical protagonists (for example the Musketeer d'Artagnan), whose adventures are set in the context of historical events (for example the siege of La Rochelle in 1627/28) and historical figures (for example Cardinal Minister Richelieu ). The best-known novels that have been published again and again and are not only read by young people are: Les trois mousquétaires ( The Three Musketeers , 1844), Vingt ans après ( Twenty Years Later , 1845), La reine Margot ( Queen Margot , 1845), Le comte de Monte-Christo ( The Count of Monte Christo , 1845–46), Le Vicomte de Bragelonne ou L'homme au masque de fer (The man in the iron mask) and Le collier de la reine ( The Queen's collar , 1848–50 ). Many of the major episodes and personalities in his work have been inspired by his father's life and military career.